The opening episode of True Detective is just one more in a series of compelling arguments as to the increasing dominance of television as a valid entertainment medium. Watching ‘The Long Bright Dark” is one of the few experiences I’ve had in which there was a real sense of television meeting the standards set by cinema. The potential that this first episode of True Detective reveals is unmistakeable, but may only be realised as the series continues.

True Detective is dissimilar to more popular HBO fare such as The Sopranos or The Wire in the sense that each season will follow a unique story with unique characters. This initial season, which will consist of eight episodes in total, follows Detective Rust Cohle (McConaughey) and Detective Martin Hart (Woody Harrelson) on the hunt for a serial killer over the course of seventeen years. The multiple timelines the show employs include Cohle and Hart during the investigation in 1995 as well as both detectives (Martin still employed, Cohle a much unravelled version of his former self) being interviewed by detectives investigating an eerily similar case in 2012. Just recently ReelGood published an article on long form cinema. There may be no better illustration of this idea than what director Cary Fukunaga and creator Nic Pizzolatto seem to be trying to achieve with True Detective.

From the initial moments of “The Long Bright Dark”, True Detective seems to adhere to the principles of cinema rather than traditional television. Despite increasing budgets and exposure in television series such as Game of Thrones or Breaking Bad, many shows remain, at their core, television. The most noticeable difference in True Detective as compared to shows with equivalent budgets and talent is just how much Fukunaga has managed to reduce dead screen time. Every scene and every piece of dialogue seems crucial.

Much of this has to do with the impeccable sense of style and atmosphere Fukanaga brings to the table. The inspiration of classic films and shows in the procedural drama is evident – particularly Silence of the Lambs, Zodiac and even Twin Peaks – but Fukanaga manages to use this inspiration to enhance rather than diminish the grungy mood of Cohle and Hart’s Louisiana surroundings. 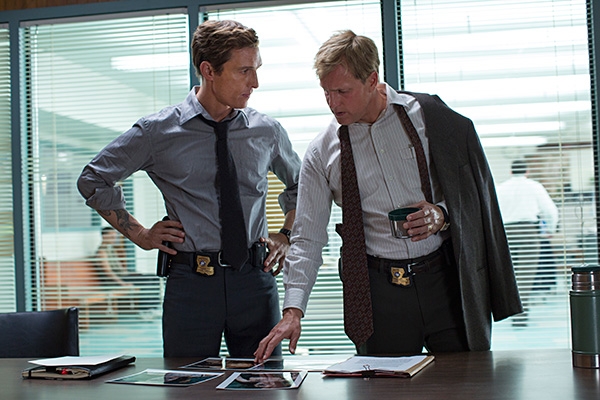 If there is any complaint to be had of True Detective it would be that the genre in which it lies has long since begun to lose its spark. Regarding story, there seems little new that True Detective can offer. Thankfully, so far Fukunaga and Pizzolato seem to be aware of this and appear more interested in the men struggling to solve the murder case rather than the murder itself. It’s in the personalities of both men that the real excitement in True Detective lies. There’s a nasty edge but also a well of depth to the ‘odd couple’ pairing of Cohle and Hart. So far, despite his protestations to Cohle’s odd outbursts, Martin is for the most part protective of his partner. And his gloominess notwithstanding (which appears to stem from the death of his wife and young child), Cohle does have moments where he appears to be trying to be a good partner.

The performances by the two principle cast members are faultless, particularly McConaughey as the murky Cohle. McConaughey has reinvigorated his career over the past year or so by embracing fringe characters, and there is depth he brings to Cohle that perhaps even the viewer can not yet decipher. There’s an interesting chemistry to the men, most evident perhaps in one of the episode’s best scenes in which Cohle unexpectedly shares his grim point of view of the world with the decidedly unreceptive Hart.

Like the dour world views of Cohle, there’s nothing sunny about True Detective, but if “The Long Bright Dark” is anything to go by there’s an ocean of depth to be explored. It’s been an electric decade for television and True Detective has the potential to push the medium further than it’s ever been.