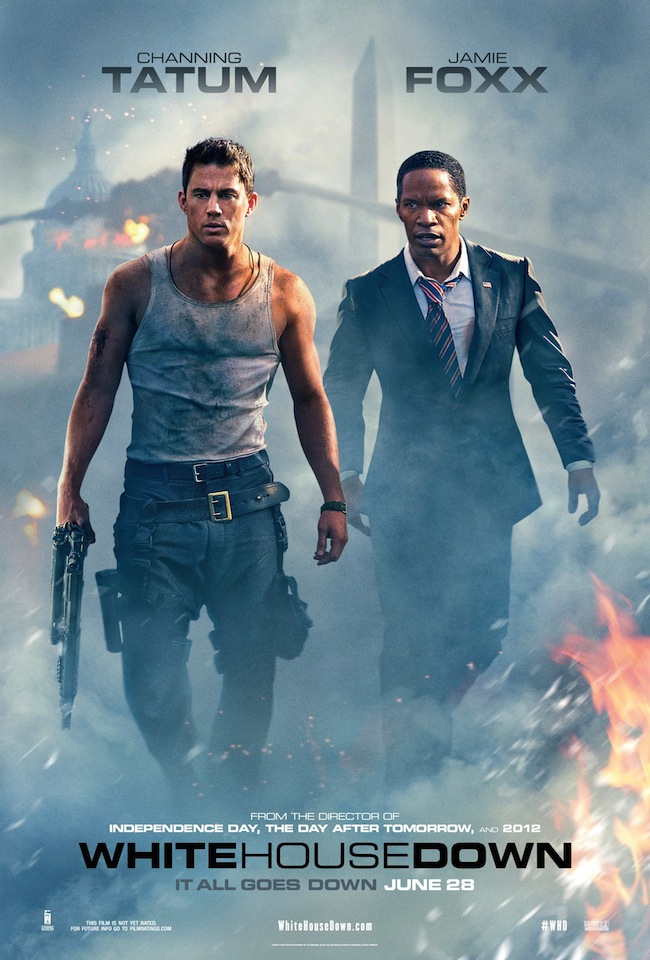 One has a shotgun, one wears a suit. One looks serious, the other looks slightly worried and oddly curious. Perhaps the sun is in his eyes? Or maybe’s he’s wondering why the guy with the gun isn’t wearing a shirt? Maybe he’s just realised that the guy with the gun NEVER wears a shirt. Or perhaps he’s anxious about the dry cleaning bill he’s clearly racking up, as that suit isn’t gonna clean itself. These are all questions without answers, much like “why is the sky blue” or “what happened to Lindsey Lohan’s face?” But the truth is, we don’t need answers, because these two renegades are walking away from (or towards) something big and ain’t nothin’ gonna break their stride. Ain’t nothin’ gonna slow them down.

The dirty, shirtless, gunman is Channing Tatum (if that is his real name) and the concerned accountant is Jamie Foxx (if that is his real name). Their names appear above their heads, just in case you thought Jamie Foxx went all ‘Michael Jackson’ or Channing Tatum went all ‘Robert Downey Jnr’. The film is directed by the same guy who brought you Independence Day, The Day After Tomorrow and 2012, so expect loud noises, explosions and the president to be played by Bill Pullman. Curiously, the words “White” and “Down” appear in a bolder font than “House”, possibly alluding to Channing Tatum dying? Or possibly not.

This poster has it all – tension, drama, iconic American buildings in the title and/or background – it’s hard to imagine that the film could possibly live up to its level of badassness. But one thing is for sure – if you take your girlfriend to see this film under the guise that it stars Ray from Ray and Magic Mike from Magic Mike, prepare for her to walk away from (or towards) you with purpose, depending on how she feels about loud noises, explosions and Bill Pullman.