Korean director E J-yong gets a little bit meta in this mockumentary, starring himself (as himself) and various actors as themselves, who attempt to make a movie without the director actually physically on set. E attempts to direct the film over web cam, telling his cast and crew when they arrive on set that he is in LA, in effect playing out the script from the short, ten-minute film he has been commissioned to make. The set quickly descends into chaos, whilst E continues to think he is undertaking something experimental and groundbreaking. 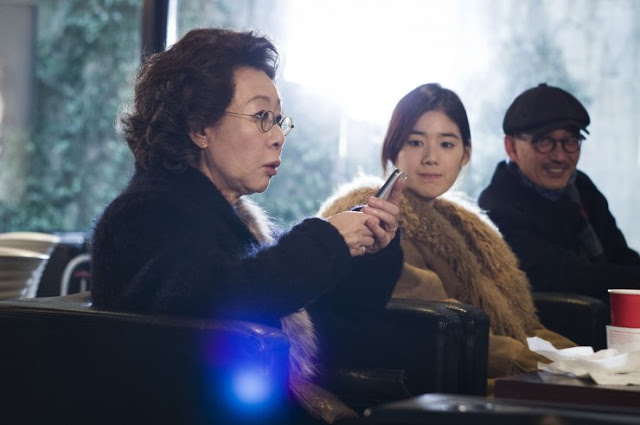 It’s not a film for everyone, but if you’ve ever had an interest in what goes on set, or been on a film set, then this will intrigue. The documentary style of shooting definitely gives it a ‘behind-the-scenes featurette’ feel. I have a feeling that I am not well versed enough in Korean films to really get all the in jokes and references that no doubt abound, though I most definitely had a bit of a cackle with references to famous Korean directors Park Chan-wook and Kim Jee-woon (especially with references to Kim shooting his film The Last Stand with Arnold).

It’s not as confusing as I’m making it out to be, I promise. And you, after a slow start, where I was beginning to think that this whole thing was too ridiculous to work, I found myself getting into it. It’s not going to set the world ablaze, but it was enjoyable. Watching the subtle power struggles taking place on set as E J-yong gradually loses control over his crew, watching the actors and actresses getting frustrated – it was all done very subtly and felt very life-like. No melodramatics. I particularly enjoyed Yun Yeo-jeong as the far from impressed lead actress on set – all the other actors in the film treat her with great respect, and she waltzes through the film with a terrific haughtiness that just made me laugh. Nothing better than a sarcastic actress who won’t take any bullshit!

I’ve a feeling this film would have had a greater impact on me if I was already familiar with the directors previous film, The Actresses – as it is, for fans of Korean cinema, I’d say this is worth a watch.