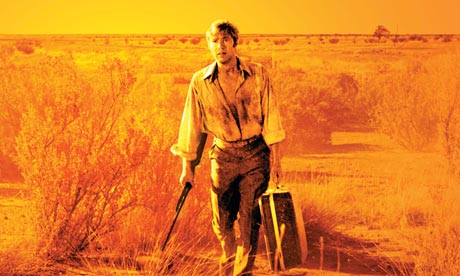 I would be surprised if any student of Australian film didn’t think long and hard before venturing out into the Outback on a holiday. If there’s one thing cinema has taught us it’s that the Australian desert is a hostile place, the landscape unforgiving and the population about as welcoming as Alcatraz prison guards. If a fella buys you a cold beer to help with the heat or offers his services getting your car engine started, you can be pretty sure there’s some menace behind his manners.

Ted Kotcheff’s 1971 Wake In Fright doesn’t play like a horror, but its similarities to Greg McLean’s 2005 tourist frightener Wolf Creek are striking. The men who inhabit Kotcheff’s film are from the same cruel corner of Australia’s cinematic world as John Jarratt’s Mick Taylor or even Snowtown’s John Bunting. These are the guys that would outknife Mick Dundee.

Wake In Fright, based on Kenneth Cook’s homonymous novel, was long regarded as Australia’s great lost film as it had been unavailable on any home format for a number of years and hadn’t enjoyed the benefits of television broadcasting. Thankfully the film received a digitally restored re-release back in 2009 and has been steadily growing in reputation ever since.

The story follows John Grant (Gary Bond), a young teacher posted in the remote two building town of Tiboonda. He’s not there by choice, as he explains to another character early on in the piece, but because of the burden he bears after signing a financial bond with the government in return for his tertiary education. The bond ensures Grant honors the Tiboonda position and ultimately it is his desperation to rid himself of the job that lands the young teacher in hot water.

One could also argue that it’s the seemingly magnetic powers of the remote, hellish city Bundanyabba, or ‘The Yabba’ that is behind Grant’s eventual descent. It is the isolated city in which he means to only stay one night on his way to Sydney on school holidays but somehow manages to get drawn into again and again. It’s in and around ‘The Yabba’ that most of the film takes place. If the film is about Grant’s descent, then The Yabba is surely the hell he sinks to.

The people of Bundanyabba seem to only want to drink and fight and they all manage to inject a startling amount of menace into friendly banter. They claim that The Yabba is the ‘best little town in the world’, where ‘if you’re a good bloke, you’re all right’. That might be Grant’s problem. He’s not a likeable guy. He looks down at his post in Tiboonda and sneers condescendingly at the Bundanyabba locals. We never feel all that sorry for him as his life tumbles dangerously out of control. He brings the hazards of The Yabba upon himself and probably deserves them.

Canadian born Kotcheff, who would go onto have a relatively successful career in Hollywood with films like First Blood (1982) and Weekend At Bernies (1989) is remarkably comfortable behind the camera here. His confidence is something that Australian cinema often lacks, too often held back by the desire to replicate the cinema of Hollywood or Britain.

It’s worth noting that the film has received quite a bit of negative criticism regarding a scene in which a number of the characters engage in a kangaroo hunt. The scene shows the actual slaughter and torment of kangaroos. It’s an incredibly confronting scene and was apparently only included on the DVD and BluRay release after some debate and the eventual approval from a number of animal rights organizations. The sequence is brutally challenging, appropriate to the extreme atmosphere Kotcheff creates, but may put some off what is an otherwise fantastic film.

Wake In Fright is a remarkable addition to Australian film. It’s been noted before that the greatest of Australian films all have a strong genre element and I’m inclined to agree. It’s the films that aren’t self-consciously Australian that really succeed, because they’re good films regardless of where they were made. The industry may have completely collapsed after Baz Luhrmann’s 2008 abomination Australia (after destroying Shakespeare, almost killing the Australian film industry and now gearing up to tear one of the greatest novels ever apart, it’s beyond me how that man keeps getting money to make films), but has thankfully been revived by great flicks like Animal Kingdom (2010), Snowtown (2011) and Wish You Were Here (2012). Wake In Fright is a genuine classic, no matter what country you come from. It’s brutal, intense and confronting but has a good case to be called one of the greatest Australian films of all time.