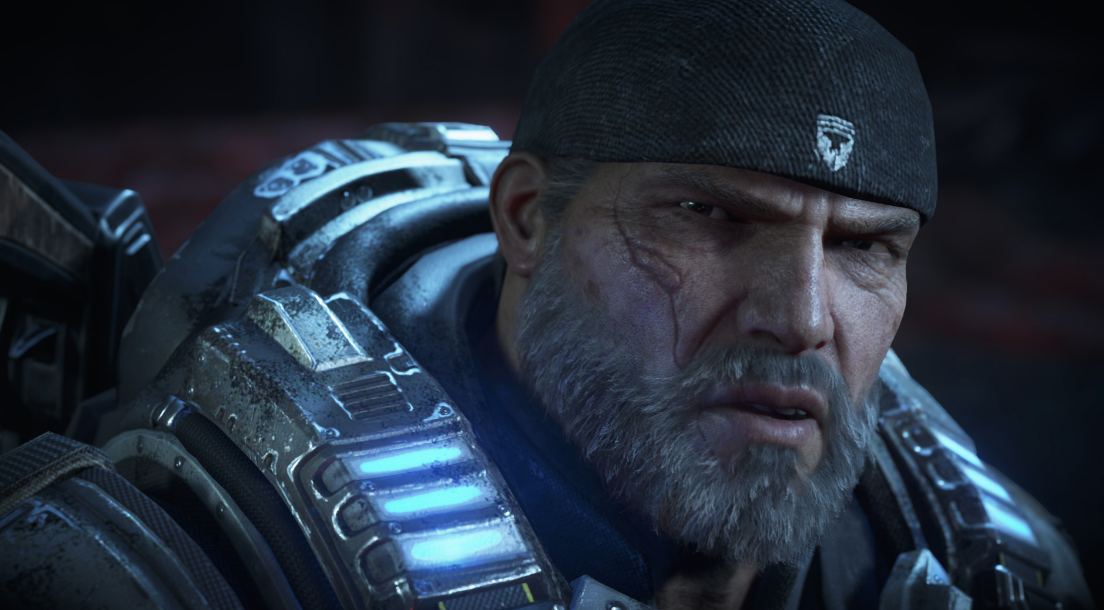 Game reviews on ReelGood are as much discussion as review, principally focusing on less technical elements of gaming.

The original Gears Of War is almost exactly ten years old. It’s a testament to the strength of that game, developed by Epic Games and published by Microsoft Games Studios, that Gears Of War 4 is as fundamentally wonderful as it is. In 2006, Gears Of War was innovative, revolutionary, and established standards that subsequent games adopted to the point that many are now industry norms. Gears Of War took most of us by surprise. The act of playing it on the Xbox360 for the first time was accompanied by the unmistakable inkling that you were playing something significant. A literal game changer. By comparison, Gears Of War 4 is still a lot of fun, but the creative drive behind the game is hesitant rather than spirited.

Ten years later, and the series has changed hands. Epic Games hung up their hat after the third entry in the series (the inventively titled Gears Of War 3) and passed the reins of the franchise onto developer The Coalition (formally Black Tusk Studios – the name change was announced in 2015 to indicate the company’s affiliation with the Gears series). IGN’s review of Gears Of War 4 makes an interesting comparison between the manner in which The Coalition has approached the game and the way in which J.J. Abram’s assumed the mantle of director for the most recent instalment in the Star Wars franchise. Whether you perceive that comparison as a compliment may well depend on how you feel about The Force Awakens, but the comparison is an appropriate one nonetheless. 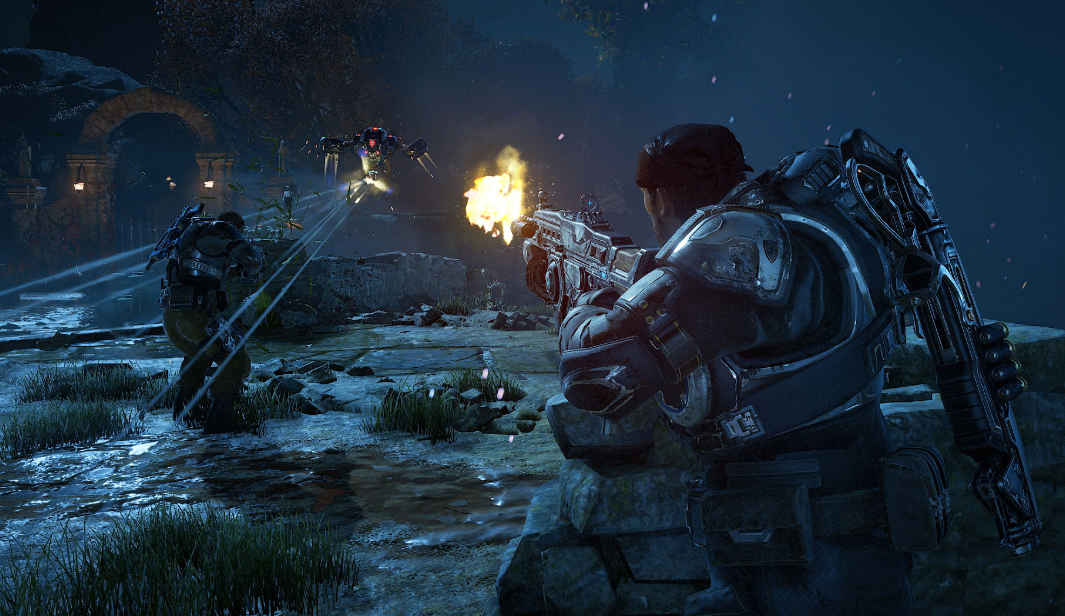 Whereas Gears 1 challenged perceptions of the manner in which shooters can be presented, The Coalition has played their hand painfully cautiously. Just like Abrams and The Force Awakens, the impression that Gears 4 gives is its preoccupation with introducing the franchise to a new audience while maintaining favour with ardent fans. That caution is detrimental to the game. When Gears Of War 4 tries new things, it’s more often than not too half-hearted in its execution to make a significant impact on the game. The campaign is at its best when it feels like the original Gears. That’s not a bad thing not is it a particularly good thing. It’s enough for the new instalment to be often wildly entertaining. It’s not enough for the game to great, especially for a release with the power of ten years of hindsight. Gears Of War 4 is fun because Gears Of War 1 was fun.

While the narratives of the original three Gears games may benefit from nostalgia, the story and the characters in Gears Of War 4 are a critical step in the wrong direction for the series. This is most evident in the opening few hours, in which the script is tremendously heavy-handed and the characters completely lacking the charm of the COGs circa 2006. As the game progresses, this becomes less of an issue, as JD Fenix (the son of the original protagonist, Marcus Fenix), Kait Diaz and Del Walker grow into their personalities. It helps that the culturally chaotic and oppressively irritating character of Oscar Diaz bows out of the storyline early on. But even as the cast shed their initial strained sense of character, they are simply not as engaging as the occupants of the original trilogy, nor are The Coalition’s numerous attempts at engaging emotionally successful in the slightest. There are a lot of them, and you just won’t care. Video game writing this poor in a post-The Last Of Us world is as underwhelming as it is unacceptable. 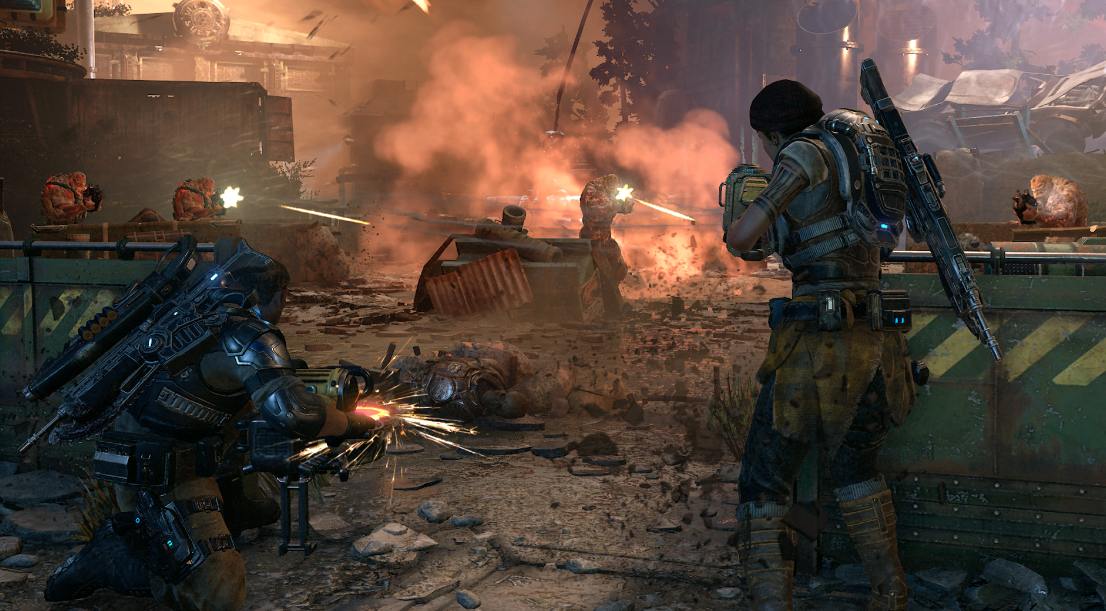 The Gears series has always taken a keen interest in multiplayer and remains one of the last bastions of hope for local co-operative play; a dying breed in the contemporary climate of online multiplayer. The ace up the campaign’s sleeve is its co-op. It’s even possible to play local split-screen co-op in conjunction with online play. Why more games don’t invest as much energy into co-operative play as the Gears series is understandable from a financial point of view, but not an enjoyment one, and enjoyment ought to be paramount when it comes to shooters. Other than local co-op, Horde Mode is the series’ other hallmark, often imitated and never bettered. The iteration of Horde Mode in Gears Of War 4 is its finest yet.

The Coalition knows what made the Gears series so wonderful back on the Xbox360, but it isn’t willing to extend that quality with any consequence. The variation in visuals and enemies are a welcome addition, and the two areas in which the new developer actually adds worthwhile elements to the franchise. All those innovations of Gears Of War from back in 2006 remain in tact, but they have also become commonplace in gaming in the interim, and in some cases, outdated. The mechanics operate in almost identical fashion (albeit more executed more proficiently) as they did in the original Gears Of War. The old idiom of not fixin’ somethin’ if it ain’t broke is all well and good, but since when did lack of innovation ever benefit the video game industry. Gears Of War 4 is a very good video game, but it may not quite do its predecessors justice.