After he was arrested in 2009, placed under house arrest and given a twenty-year ban on filmmaking, Jafar Panahi defied the order and was able to present to the world This Is Not A Film, an effort that moved me deeply. Now, he has managed to defy the ban yet again, and present to the world Closed Curtain. After a successful Berlin premier (where it won a Silver Bear award for Best Script), co-director Kamboziya Partovi and actress Maryam Moghadam had their passports confiscated. I feel very lucky that I was able to see this, and it is already one of my favourites of the year.

The film begins with a writer (Partovi) arriving at a remote house by the ocean. When he gets into the house, he opens a duffle bag and we discover he has been carrying his pet dog, Boy, hidden with him. Without much explanation, he closes all the curtains and blacks out the windows. We soon find out he is determined to keep Boy hidden from sight, as dogs have been declared banned (considered unclean) and will be destroyed if they are spotted. One night, while emptying the dogs litter box, the writer is shocked to discover that a young man and woman (Moghadam) have slipped in the front door, on the run from authorities, though they are very sketchy on details. The man leaves, promising to come back with a car for his sister. The woman, Melika, is dramatic and bothersome, and often entertains thoughts of suicide, to the writer’s dismay. He can’t get his work done. Things become stranger, but clearer, when Panahi himself appears at the house… 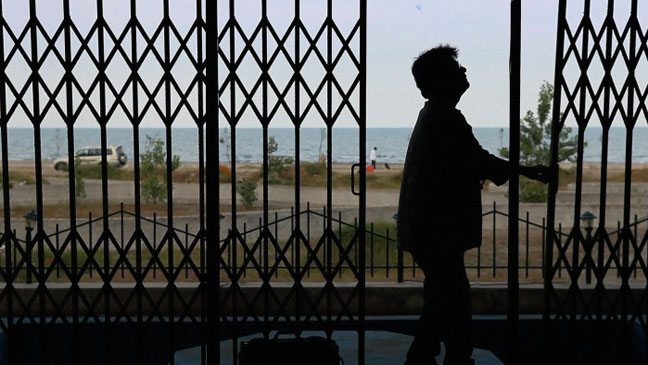 It becomes clear that the writer, Melika, and even Boy represent the different thoughts, desires, and conflicting emotions that play with Panahi’s mind. The film is autobiographical in nature. The writer, the creator, is disrupted by the dark and turbulent thoughts that Melika represents. Boy is confined and longs to run outside, but the relationship between the dog and the writer is very sweetly done, and is sometimes a chief source of the writer’s story. It’s incredibly self-reflexive, and offers some kind if insight into Panahi’s mind.

The thing to understand is, that this film is slow; it takes its time, but it every moment is meaningful. Sometimes what we see is very troubling and absolutely heartbreaking – at one point Panahi sees a message from Melika on his phone, where she tells him she has driven the writer away, and that there is only one way out, before walking out into the ocean. At other times the writer is there, and says that he will always be there. Panahi’s desire to create will never leave him. It is in ways like this, that the film has a much more hopeful feel, even uplifting.

Closed Curtain is an incredibly important film, and the perfect companion to This Is Not A Film. It opens in a calm, quiet, unassuming manner and flows and develops organically in much the same fashion. This is a brave, poetic, beautiful film; a meditation on suppressed creativity and a powerful experience.