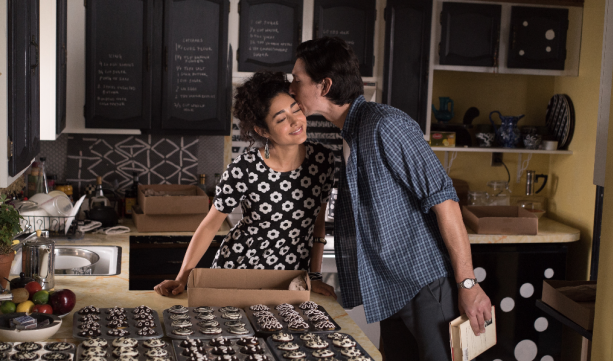 Ever notice how bus drivers – train drivers, tram drivers, what have you – will wave, or honk, or otherwise acknowledge each other when their vehicles pass? Paterson, the latest film from Jim Jarmusch, kind of explains why. It’s not just that they’re social creatures who thrive on such pleasantries. Rather, it’s that the lives of human beings can be so mundane, repeating the same rote activities on endless loops, that the only ones who can really appreciate their particular brand of ennui are others in the exact same boat. (Or bus, or train, or tram.) Paterson, though, does not despair about this. It finds the grace notes of beauty, the poetry, in the most humdrum aspects of existence.

Adam Driver plays, appropriately, the bus driver of the title, who shares a name with the New Jersey city in which he works and has always lived. He’s having what might be either his most typical week, or his least. While his daily routine is essentially unchanged – wake up at 6:15, eat his cereal, walk to work, write a little poetry, drive the bus around, walk home, debrief with his girlfriend, walk the dog to the bar where he gets a drink – little details are starting to make this particular week peculiar. For one, he’s seeing sets of twins everywhere. That’s in addition to seeing the name of the city (and therefore his own name) everywhere. (Malkovich, Malkovich, Malkovich.) Plus, a week-long breakup between two of the bar patrons is escalating, his girlfriend is buying an expensive guitar so she can become a country singer, and he’s promised to finally make a copy of his secret book of poetry so it doesn’t get lost.

As ever, Jarmusch is capable of making this quiet and unassuming subject matter seem whimsical, profound and sometimes hilarious. Driver is his perfect muse in that regard. Driver plays the role blankly, to a purpose; Paterson isn’t the type of person who makes things happen on his own. He’s not exactly drifting through life either, since he’s always observing it intensely. In fact, his poems encompass such things as the particular aesthetic virtues of a box of blue-tipped matches. And if poetry is his main interest – he’s a devotee of William Carlos Williams, who wrote a collection of poems named after the city – then one can say he’s a bit like T.S. Eliot’s J. Alfred Prufrock, not sure whether he should dare to eat a peach. The yin to his yang is his girlfriend, played by Golshifteh Farahani, who is as much of a loopy extrovert and dreamer (she also paints shower curtains and makes cupcakes) as he is gentle and introspective. Somehow they work together, though part of their happiness seems like an illusion as well.

As Jarmusch is maturing, he’s not so much changing his sensibilities as fine-tuning them. Whereas earlier films like Stranger Than Paradise seem to be “about nothing” in a kind of nihilistic way, nowadays he’s more contemplative and, I suppose, adult about the ineffable absurdities and melancholies of life. It’s a welcome change. Spending a week with Paterson is an experience of being lulled into his slower rhythms, but also moved by his unique quest for meaning.