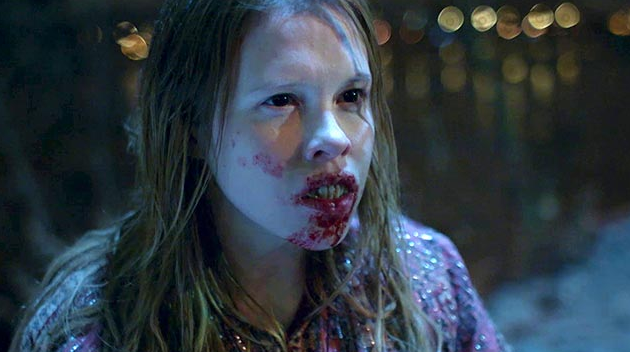 The Lure is like if Let the Right One In were co-directed by Nicolas Winding Refn and Baz Luhrmann, and the vampires were also mermaids who worked in a Warsaw nightclub. Oh, and if it were a musical. The actual director of The Lure is Agnieszka Smoczynska, and she immediately establishes herself as a talent to be reckoned with in terms of sheer gonzo vision. It’s a sinister fairy tale crossed with a music video crossed with a love story, and every second of it pulses with sonic and visual energy.

The mermaids in question are Golden (Michalina Olszanska) and Silver (Marta Mazurek), who emerge from a bay outside a nightclub that features musical acts and burlesque, entrancing a family of performers with their siren song. Unlike a film like Splash!, they aren’t trying to hide their identities to avoid being whisked away to a top secret laboratory to be poked and prodded. Their status as fish is immediately exploited by the club owner, who makes them a star attraction and repurposes their golden voices for the various types of music he can sell to his customers, which run the gamut from disco to punk rock. (This is the early 1980s, it would seem.) The mermaids can communicate telepathically with each other and are bound to certain hungers – like, a vampire’s for flesh, which they rend with teeth that become pointed with their appetite is aroused. But they’re also bound to certain rules, so when one falls in love with a handsome singer about her own age, she contemplates ways to become more biologically compatible with him, even though she knows mermaid lore demands a steep penalty if her love goes unrequited.

Originality is rarely as startling as it is in The Lure. From the first few moments it’s clear we’ve stepped into a dangerous fantasy world, as the mermaids unleash an ethereal song of such malevolent beauty that one doesn’t know whether to fall in love or run screaming. They’re talking about not eating the people they’re singing to – never a hopeful sign – but the music is like a symphony of synthesizers and impossible falsettos, as beautiful as it is bruising. This tone suffuses everything that comes next, a blending of romance and horror that is as consistently unsettling as it is captivating. Smoczynska’s sound design attains an uncanny synchronisation with her visuals, as various aquatic-sounding bleeps and blurps comprise the mermaids’ telepathic language, while also functioning as eerie atmosphere. Smoczynska also confronts the viewer with extreme close-ups of her actors looking straight at the camera, music video style. The dance choreography has an unholy reptilian quality to it, yet it’s also impossible to look away. The film is comprised of such contradictions.

The Lure is an experience, and it’s an absolute trip. If mermaids are known for luring unwitting sailors to their watery graves, The Lure has the same type of entrancing effect on its viewers. With probably a slightly less fatal outcome.