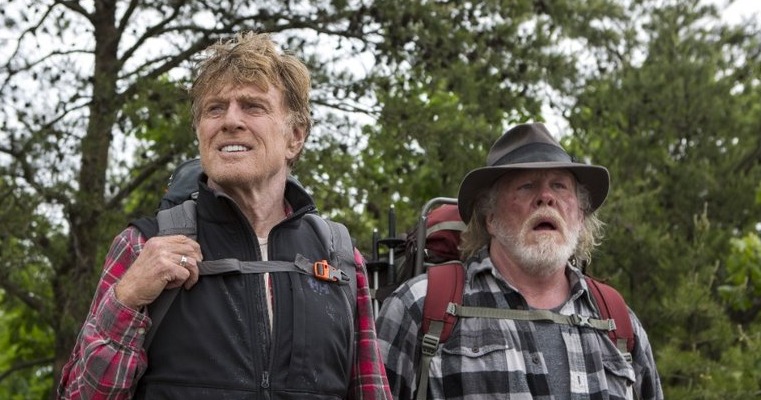 When Bill Bryson’s book/memoir, “A Walk In The Woods”, was first optioned almost twenty years ago, the intention was to reunite Robert Redford and Paul Newman in an effort to rekindle their natural chemistry from George Roy Hill’s classics The Sting and Butch Cassidy and the Sundance Kid. Time and Newman’s declining health prevented the reunion and now, in Ken Kwapis’ adaptation of Bryson’s book, Redford shares the screen with Nick Nolte. It’s hard to deny Newman’s involvement would have made for more congenial viewing. Nolte, as a performer, is perhaps as far removed from Newman’s appealing charisma as gets. He has also, though younger than both Redford and Newman, aged particularly unfortunately. Every movement, every word is as exhausting for an audience to watch as it is for Nolte to commit.

And yet at it’s heart, A Walk In The Woods is about two men who have approached their lives with contradicting guidelines, who unite for a challenge that neither of them should be physically or mentally equip for. Newman may have made a more beguiling hiking partner but Nolte has more appropriately lost everything that Redford has astonishingly managed to retain. It’s what unites these men despite their differences that’s important. At it’s best, A Walk In The Woods promotes the unavoidable constants of life. Sometimes, those constants can be a surprising comfort.

Kwapis’ film takes liberties with Bryson’s work, although the fundamental framework is there. Bryson (Redford) is an established author, having generated wide success with his accessible travel narrative work, particularly “Notes From A Small Island.” Entering the stage of life in which bodies begin to lose their vitality and friends begin to lose their lives, Bryson is struck with sudden inspiration to walk the famous Appalachian Trail, the 2,200 mile hike in eastern United States extending between Springer Mountain in Georgia and Mount Katahdin in Maine. Fearing for his safety, Bryson’s wife, Catherine (Emma Thompson), insists that someone accompanies him. The only interest he gets is from Stephen Katz (Nolte), an old travelling companion with whom Bryson shares a contentious past. 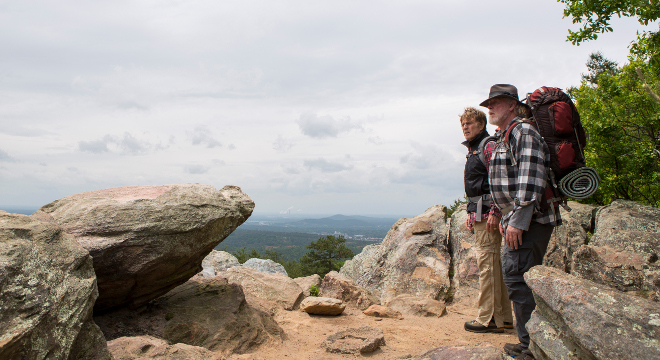 Humour is an integral part of Bryson’s work. He’s an uncanny knack for condensing broad ideas into appealing prose. Kwapis’ film misdirects Bryson’s gentle humour toward the absurd. This forced, improbable approach to laughs belies Bryson’s skill at evoking humour from relatable situations. It’s also just not very funny. In comparison to Bryson’s easy going writing style the dialogue in A Walk In The Woods comes off as unwilling and too eager to capture the spirit of the book. Perhaps it’s unreasonable to judge a film by the book upon which it is based, although, since the author is the subject matter, comparisons are somewhat invited.

As Bryson, Redford is notably good. Though his resemblance to the author is minimal, he manages to capture Bryson’s worldly curiosity and gentle wit perfectly. Redford’s has been a classy actor his whole life but his recent years have brought with them an earthy integrity, such as in his performance for J.C. Chandor’s wonderful film All Is Lost, that accommodates this variety of film perfectly. Nick Nolte is difficult to watch, but that’s because he’s Nick Nolte. He may just be the perfect compliment to Redford in Kwapis’ film, and he’s certainly an appropriate counterpart regarding the film’s concept, but that doesn’t make his overbearing exhaustion any easier to bear.

A Walk In The Woods isn’t the first film of this ilk, in which nature is a catalyst for self-comprehension, and it won’t be the last. In recent years, Jean-Marc Vallée’s Wild is the best. There’s a temptation to disregard A Walk In The Woods as a mildly altered emulation of Vallèe’s film, but that would be to ignore its merits. Cheryl Strayed, the protagonist of Wild, was young and full of vitality, searching for a way to pursue what’s before her. Bryson and Katz are old and weary, needing a way to reflect everything that’s been.