Someone once described music as providing ‘a kind of pleasure which human nature cannot do without.’ Rohan Spong‘s new film All The Way Through Evening is a self-described musical documentary. It looks at the effect that music has on us and the purpose it can bring to our lives. It is also about the devastation that HIV related illnesses have wrought on the New York gay community since the AIDS epidemic was first recognised in the 1980s. Most importantly, it is a film that asserts a life-affirming message despite the disheartening stories it relates.

The film focuses on Mimi Stern-Wolfe, an elderly pianist who has been involved in socially aware concerts for over thirty years. Every year, Stern-Wolfe organises a concert in New York City involving the music of those affected by HIV, both alive and dead. “I do these concerts for years and years because I knew the people we lost,” she offers as explanation. 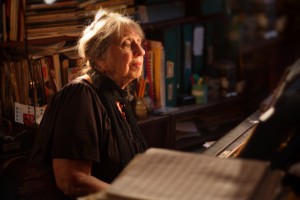 As the centre of the film Stern-Wolfe is a remarkable subject. Her energy and attitude belie her age. ‘Mimi has stamina’, a much younger fellow musician tells us and we get the impression that the people around her do their best to keep up with Stern-Wolfe’s extraordinary vitality. Sheet music is littered across her apartment, collected from an entire lifetime of loving music.

There is an intimate atmosphere to the film, told mostly in close-up interviews of musicians dedicated to preserving the memory of those lost to HIV. Spong wisely shies away from giving us a history of the devastating illness, instead focusing on the people involved in the concerts. The film is not a lecture on the seriousness of the illness. We already know how terrible HIV can be. We rarely hear about what the victims of the illness went through, All The Way Through Evening is more interested in their love of music. We hear the stories of a number of men involved in the New York classical music scene who died prematurely as a result of HIV related illnesses. Stern-Wolfe keeps them alive by performing their music. There is a sadness to the film, but it is not depressive. 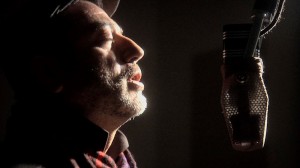 The film is not perfect. It is sometimes difficult to follow exactly how each person is connected to Stern-Wolfe’s concerts but ultimately this is a very minor criticism of an otherwise engaging film. It’s also worth noting that your enjoyment of the film may depend on your interest in classical music. This being said, I saw the film with a friend who doesn’t generally listen to the sort of music performed in the film and he told me it didn’t detract from the experience at all.

All The Way Through Evening is a musical documentary and there is a uniqueness to the film’s form. Like a musical, Spong’s film is interjected with musical numbers, some recorded for the film and some from footage of older concerts. I didn’t enjoy every piece (although that is naturally, subject to opinion), but it is nonetheless an appealing concept. There is an inclination to applaud after every performance.

It is much easier to make a depressing film than the one Spong has created. There is an uplifting quality to All The Way Through Evening, despite the fact that it would not exist without the AIDS epidemic. There are too few films which examine the pursuits that provide us with quality of life. At one point the question is posed,  “What use is music in the face of AIDS?”  The answer provided? “it’s every use.”