There was an innocent charm to the chaos of 2004’s Anchorman: The Legend of Ron Burgandy that is decidedly missing from the ill-advised follow-up Anchorman 2: The Legend Continues. The characters seem to know how popular they have become, which diminishes the quirky freshness that made the first film so successful. Ron and the gang now seem well aware of how often they’ve been quoted over the past nine years, which lines have been quoted, and which scenes are the most popular. The filmmakers seem to think reiteration might constitute success. Buster Keaton and Charlie Chaplin made a career out of falling over and over again. Repetition doesn’t work quite so well for Anchorman 2.

A perfect example of when the customer is wrong, Anchorman 2 is the result of nearly a decade of pressure from fans of the original, stemming from the bewildering impression that a sequel was not only desired, but in fact required. It would be a rare case in which good comedy could be made under such pressure. Anchorman 2 is almost akin to watching someone with zero comedic timing read the script of the first film. 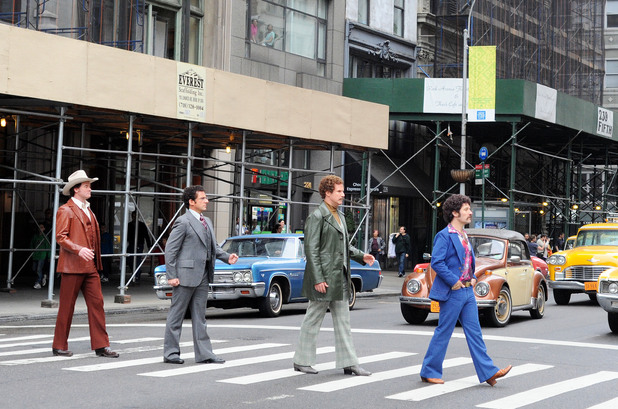 Ron has been left down, out and humiliated after his New York-based network decides to favour wife and co-anchor Veronica Cornerstone over himself. It’s difficult to elaborate on the plot since there isn’t much after the opening sequence. The next two hours, which is a lengthy running-time for most comedies and two hours too long for this one, is a series of stale recollections of the original. The gang’s sexist indignation at having a female co-anchor in the first film poked silly fun at sexism; the similar racist resentment toward their black boss in The Legend Continues projects an uncomfortable sense of actual racism.

Strangely enough it’s Steve Carell as obtuse weatherman Brick Tamlin who emerges the most unscathed, perhaps because he’s the only one who seems to showing any signs of life. My appreciation of Brick in the original has grown over the years, as Carrell has increasingly flaunted surprising breadth in films such as Little Miss Sunshine and The Way Way Back. The rest of the team, and the filmmakers, seem to be on autopilot – perhaps hoping that people love these characters so much nobody will notice. They are wrong.

An unfortunate amount of comedic talent has been wasted on the film, particularly on a showdown toward the end of the film that will be tediously familiar to fans of the original. I won’t spoil any of the weary cameos here – the film can manage that on its own– suffice to say there is much in Anchorman 2: The Legend Continues that resonates indulgent, excessive and unnecessary.

Anchorman 2: The Legend Continues makes a solid case for why much loved originals should remain untouched. Sometimes we just don’t know what’s best for us. In the case of Ron Burgandy, the original may have been better off untarnished by this misguided sequel. It’s an unfortunate reminder that Dumb and Dumber Two is just around the corner. If you’re desperate for more from Ron and his news team, watch the first one again.