In a year littered with pointless sequels that no one wanted, Bad Santa 2 is a contender for the most pointless one of all. It appears to have surprised even Billy Bob Thornton, as he spends the whole movie half asleep. The original Bad Santa, released in 2003 and directed by Terry Zwigoff, was a tricky enough prospect, requiring a total recalibration of our notions of sympathetic characters and whether we can enjoy a movie without them. It has its passionate fans but is certainly not beloved. Thirteen years later – they didn’t even have the excuse of a ten-year anniversary – director Mark Waters brings us another rancid candy cane that asks us to get back into that queasy headspace, but doesn’t offer anything funny or new as incentive.

Just how unlikely was the original Bad Santa? According to traditional standards of decency and good taste, a character like Willie Soke would be unwelcome any time of the year. The fact that he invaded the hallowed ground of Christmas movies just made him all the more repugnant. For some, though, that was the selling point. Zwigoff’s movie was a giant middle finger to anyone who’s too precious about the holidays, stopping short of total abject depravity by finding a bit of a squishy heart near its end. But only a bit. 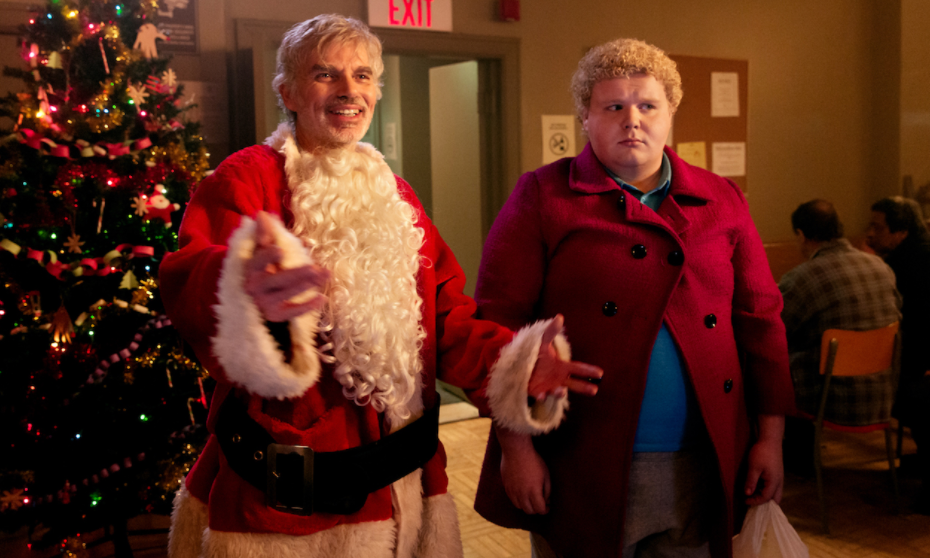 Soke may have been soaked in alcohol, scared children off his lap, urinated on himself, vomited on himself, taken advantage of good people in order to steal from them, had sex with anything that moved, and even eaten all the chocolates out of a kid’s advent calendar, but there was a wee little nugget of something good in him. About that same percentage of something good still exists – maybe a little less – but now the character no longer seems like a misanthropic trailblazer. Others have taken Zwigoff’s lead by giving us a bunch more comedic anti-heroes in the past dozen years, so now Willie’s shtick just seems as tired as Billy Bob looks.

The flimsy narrative excuse to continue following this story is that Marcus (Tony Cox), Willie’s diminutive partner in crime from the first movie, has been released from a ten-year prison sentence. (The movie wants us to believe it’s taking place ten years later, even if it isn’t.) He’s got a new gig lined up in Chicago and wants to enlist the safecracking skills of the drunk he got to stumble around in a Santa suit last time. That drunk has not had a good decade and is actually trying to hang himself with the power cord of a toaster when a package from Marcus arrives, deus ex machina style, filled with money and delivered by Willie’s “only friend”: the same boy whose advent calendar chocolates he ate in the first movie.

Thurman Merman is still played by actor Brett Kelly, but now he’s a sweetly dim 21-year-old instead of a sweetly dim 10-year-old, bordering on mentally challenged. Marcus plans to rip off a Christmas charity that’s got millions in its vault around the holidays, a scheme that’s slightly less vile because the head of the charity (Ryan Hansen) is already embezzling from it. His wife and the charity’s director (Christina Hendricks) takes an interest in Willie (for reasons that are unfathomable), but she’s not his primary concern: the other woman in Willie’s life right now is his deadbeat criminal mother (Kathy Bates), the surprise third conspirator in the heist.

The fact that Kathy Bates plays Willie’s mother is just the start of this movie’s myriad problems. Bates is only seven years older than Thornton, and he actually looks older than she does, in part because she’s all tatted up in a way that ages down her 68 years. She was supposed to have had him when she was 13, which helps explain the apparent similarity in their ages, but it makes you wonder who’s deceiving themselves more: Thornton for thinking he can play younger than 61, or Bates for deciding she needed to make this movie at all. 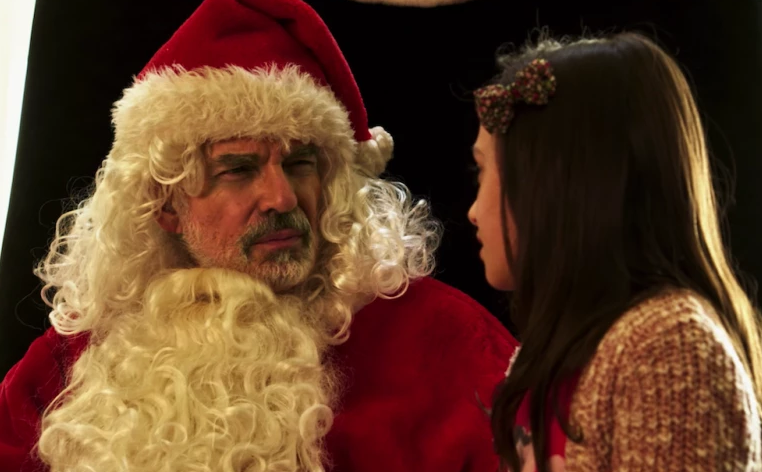 As you might expect, Bad Santa 2 is relentlessly crass and nihilistic – rarely does a character choose anything resembling the right option when the wrong one is readily available. Excessive rudeness, crudeness and profanity can be a riot in the right hands, but in the hands of Waters and writers Johnny Rosenthal and Shauna Cross, it feels like empty provocation. At the very least they could have upped the ante from the first movie, challenging the 2016 version of what offends us, but it’s essentially just a retread of Willie’s prior misdeeds. An unfunny one, at that.

Another collective deception is the fact that three different attractive women find Willie appealing enough to sleep with, some more than once. (Well, it’s not exactly sleeping – it’s shagging next to a skip.) It’s a matter of taste how handsome a viewer finds Thornton, but Willie the character isn’t good looking, either in his appearance or his actions. And he can’t smell too good either. Prudes will likely find this movie about as objectionable as the first, but there at least the absurd scenarios would have had the power to surprise. The only surprise here is that they made the movie at all. And you certainly don’t have to be a prude to find it objectionable.