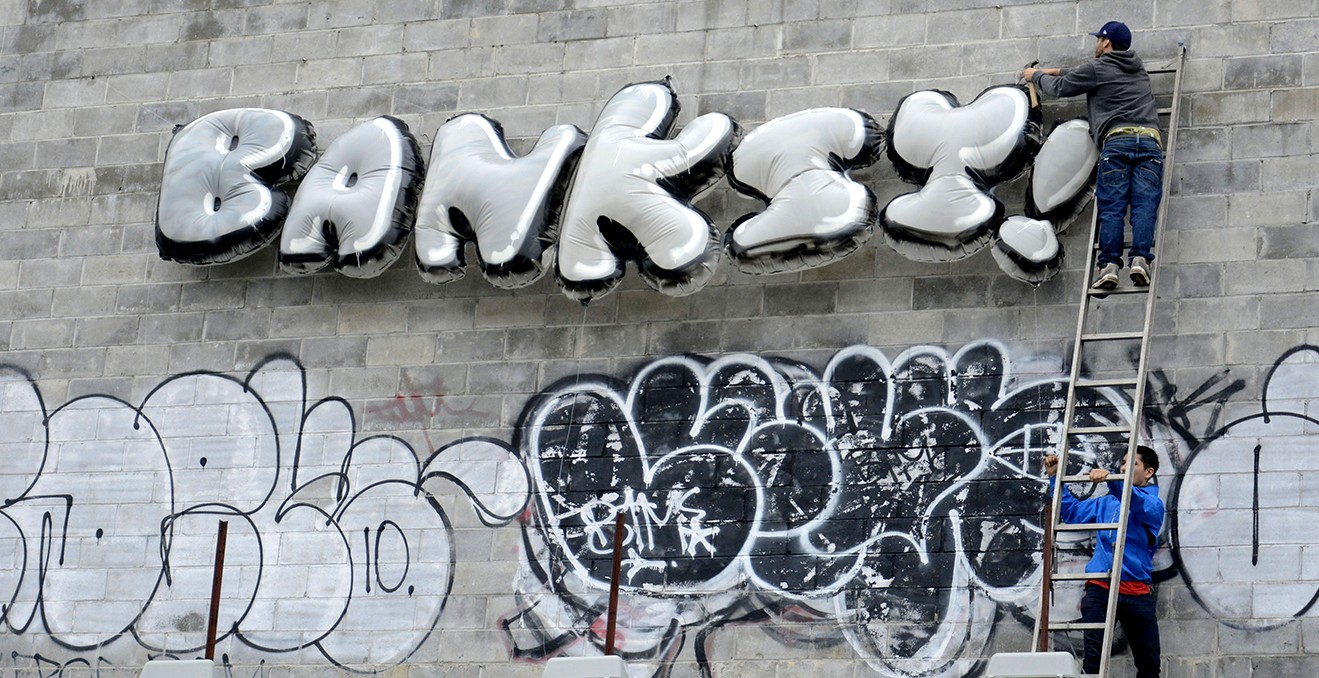 Even for those of us with little or no interest in street art, there is something undeniably cool about English street artist Banksy. First, there’s his anonymity. In this era of George Brandis looking at our metadata, tabloid journalists listening in on people’s phone conversations and everyone walking around with high-definition cameras in their pockets, Banksy’s identity has, remarkably, remained a secret since his rise to prominence in the late 1990s (although the Daily Mail claimed in 2008 that it had identified him as Robin Gunningham, a “nice middle-class boy” from Bristol). Secondly, there’s the nature of his work. Banksy steals into cities in the dead of night and illegally creates his street art using spray cans and stencils. His efforts almost invariably turn a drab urban wall into something more interesting. His art is also worth hundreds of thousands of dollars on the international art market. (It has become obligatory in articles about Banksy to mention the fact that even such art connoisseurs as Brad Pitt and Angelina Jolie ―omg!!! ― are owners of his works.) Banksy just gives his art away, however, leaving it to be variously enjoyed, defaced, stolen and even ― and this seems to happen way too often ― painted over by people who don’t realise that they’ve got a freakin’ Banksy on their wall. Thirdly, he’s just a funny bugger. Perhaps uniquely among successful contemporary artists, he doesn’t appear to take himself ― or indeed anything ― too seriously. Here is his response to being nominated for an Academy Award for Exit Through the Gift Shop: “Well, this is a surprise… I don’t agree with the concept of award ceremonies, but I’m prepared to make an exception for the ones I’m nominated for. The last time there was a naked man covered in gold paint in my house, it was me.” And some political commentary from his book Wall and Piece: “Sometimes I feel so sick at the state of the world, I can’t even finish my second apple pie.”

The new HBO documentary Banksy Does New York derives its appeal in no small part from our natural fascination with its subject. Unlike 2010’s Exit Through the Gift Shop, Banksy had no involvement in its production. Rather, it was compiled by director Chris Moukarbel mostly from footage uploaded by members of the public to video-sharing websites like YouTube. The documentary deals with the one-month period in October 2013 during which Banksy unveiled a new work of art each day in the city of New York. This project, which received a large degree of media attention at the time, was described by Banksy (with tongue in cheek) as an “artistic residency” and was titled Better Out Than In. It occurred against the backdrop of the planned demolition of “5 Pointz”, an old warehouse complex in New York famous for its beautiful street art, which is also discussed in the documentary.

The release of artworks as part of Better Out Than In followed a specific pattern: a photo of the work would appear on Banksy’s Instagram account each morning, together with a consistently funny “audio commentary” by Banksy on the work and a clue as to its location. Banksyophiles would duly rush off to find it. This being the 2010s, many of them recorded their hunt and it was this footage that was later used by Moukarbel to make Banksy Does New York. Some of the works released by Banksy were the sort of stencil art for which he has become famous. Others were more elaborate. On 17 October, for instance, he placed a giant Ronald McDonald statue outside a McDonald’s restaurant in the Bronx, with a (real-life) person dressed in Dickensian working class garb shining the shoes of the scowling Ronald. On another day, a cargo truck full of squealing stuffed animals was driven around the meatpacking district of Manhattan and other areas. My favourite piece was an op-ed column submitted by Banksy to the New York Times (and rejected by the Times) that criticised the architectural design of One World Trade Centre, describing it as “vanilla”, a “non-event” and “something they would build in Canada”. 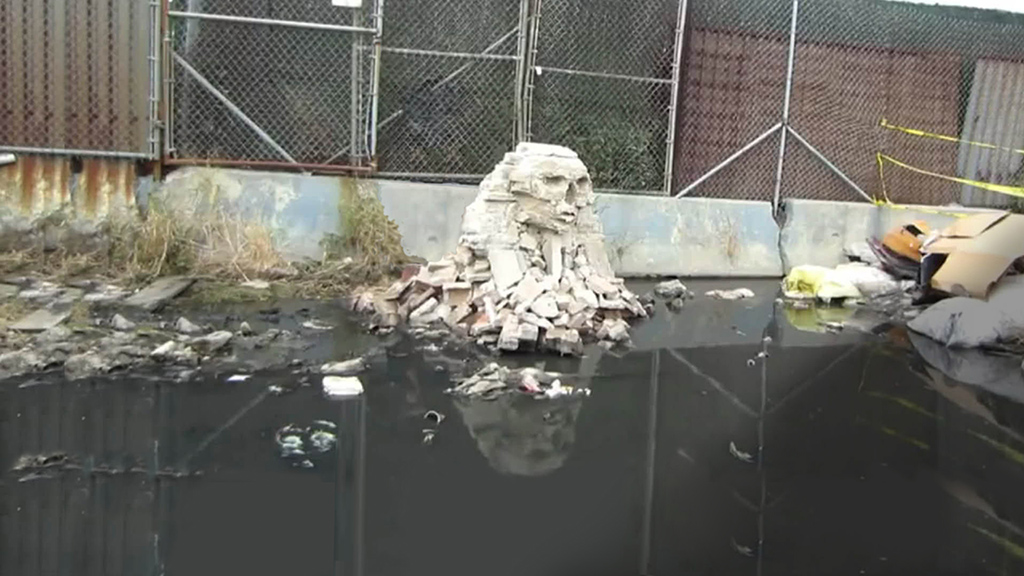 Banksy Does New York is not an especially well made documentary. Particularly early in the film, there is excessive use of the kind of handheld, “queasy-cam” footage that really gets up David Stratton’s goat. There are also a number of inane comments made by interviewees that could have been simply left out of the film. The social phenomenon that it depicts is so interesting, however, that you can’t help but be drawn in and propelled along by the story of Better Out Than In. For starters, there are the Banksy-hunters. These are people who devoted the period of the residency to driving around New York looking for the newest Banksy once the artist had released the clue as to its location. What did they do once they found it? They took “selfies” of themselves with the artwork, of course. What are we to make of this behaviour? Is this a modern artist engaging directly with his audience in a light-hearted yet authentic way and making the experience of seeing the art part of the art itself? Or is it, as some suggested in the film, a “hipster scavenger hunt” for spoiled upper-middle class yuppies with nothing better to do, orchestrated by a public relations master? Then there are those, who, at first glance, appear to be the villains of Banksy Does New York. They are the people who attempt to ruin the scavenger hunt for the Banksy-hunters. They include a gentleman called OMAR NYC who is shown “tagging” a Banksy, some tough-looking guys in a rough neighbourhood of East New York who (I think hilariously) attempt to charge the Banksy-hunters to see a picture of a beaver Banksy has stencilled onto a wall and threaten to paint over the picture if they don’t receive their money and, lastly, a family of Hispanic Americans who steal a replica of the Sphinx that Banksy constructed out of cinderblocks and left in an empty lot in Queens. The natural tendency is to regard these people as anti-social and greedy lowlifes who are ruining Better Out Than In for those who want to appreciate it. To the documentary-makers’ credit, however, they actually interview the family who have taken possession of the Sphinx and it is fair to say that, once we hear their story, our views become a lot more nuanced. One of the most interesting scenes in the film comes when Stephan Keszler, a German art dealer with a high-end gallery in Southampton, meets with the family at their home to view the Sphinx and to negotiate to sell it on their behalf. The contrast between the world of Keszler ―who specialises in selling street art to those, like Brad Pitt and Angelina Jolie, who can afford to pay hundreds of thousands of dollars for a replica Sphinx ―and the realities faced by the family is stark indeed.

Lastly, there are questions concerning the artwork itself. To begin with, what sort of artistic merit does it have? Is Banksy any good at art? An art expert interviewed in Banksy Does New York issues a scathing critique of the artist, describing his works as populist, unsubtle and uninteresting. It’s certainly true that many of Banksy’s works carry an obvious message. You can’t help but feel that the expert somehow does Banksy an injustice or misses the point, however. Some, like then New York Mayor Michael Bloomberg, argue that Banksy’s work is not even art because its production involves a crime. This wowserish view is surely incorrect but what then is the difference between Banksy’s artwork and a “tag” on the side of a Metlink train? Banksy Does New York doesn’t pretend to provide satisfactory answers to any of these questions but it does get you thinking about them and, who knows, perhaps that was what Banksy was aiming for with Better Out Than In.