"The miraculousness of Bigbug is the speed with which Jeunet immerses us in his vision of the future, which does not feel directly indebted to any previous vision."

"Jeunet is spot on in his anticipation of where our current increasing reliance on smart robots might take us, which is probably more of a best-case scenario than a worst-case."

Jean-Pierre Jeunet had a decade that was the envy of every cinematic visionary out there. From 1991 to 2001, he directed or co-directed Delicatessen, The City of Lost Children, Alien Resurrection and Amelie, which is a pretty great run of movies, even if that isn’t everyone’s favourite Alien movie. It was easy to confuse his filmography with peak Terry Gilliam. His next film, A Very Long Engagement, was also very good, if a little less heralded. But then Micmacs in 2009 was so-so, and 2013’s The Young and Prodigious T.S. Spivet was not even seen by this particular critic.

Well, Jean-Pierre est revenue. (That means he’s back, in French, probably translated incorrectly.) His first feature in nine years, the Netflix film Bigbug, is like a spiritual sequel to Delicatessen, only set in the age of artificial intelligence. It resembles Micmacs in name structure only. Like Delicatessen, it’s a look at the claustrophobic co-mingling of a bunch of sex-happy citizens in an enclosed space – there an apartment building, here a home of the future controlled by (mostly) friendly AI. Both visions showcase Jeunet’s delight in the absurd and his penchant for whimsical exaggeration.

It’s the year 2045, and the Yonyx are a mildly oppressive form of fascist sentient robots who are regulating society’s allowances and gradually pushing human beings to the sidelines. I say “mildly oppressive” because nobody seems too upset about it. Artificial intelligence is largely a boon to society, as the home is full of kind helper robots who are part of the family, and a cheery woman on a floating drone sidles up to you the moment a product goes belly up, suggesting a replacement like a future incarnation of Alexa.

In this one particular home, belonging to Alice (Elsa Zylberstein) and her daughter Nina (Marysole Fertard), the helper robots and fascist robots are about to fall at cross purposes, with a bunch of humans caught in the middle. Alice is being visited by a man she met on a dating app (Stephane De Groodt), who for some reason has also brought his teenage son (Helie Thonnat), but the visitors are about to increase twofold. Alice’s ex (Youssef Hajdi) and his daffy fiancee (Claire Chust) drop in on their way to Isolda Paradiso, a sort of resort barge where they plan to get married. Also popping in is their neighbour, Francoise (Isabelle Nanty), whose boisterous dog Toby is already the seventh clone of the original.

They’re going to spend a lot of time together, without the benefit of air conditioning, when the home’s preprogrammed response to an external threat – an epic gridlock, in this case – is to lock all the doors and prevent any of the people from leaving, for their own safety. (Yep, COVID lockdowns were certainly on Jeunet’s mind.) The helper robots – which include a humanoid servant (Claude Perron) and some old-fashioned AI tech called Einstein – don’t mean any harm by this, but they are duty bound to their own programming. Of course, they’ve also been built with the capacity for envy, as all they really want to do is figure out how to be human themselves. That runs in direct contradiction to the mentality of the Yonyx, who show nothing but disdain for the humans they are forced to manage. A popular reality show involves subjecting these humans to indignities, like forcing them to bark like dogs. 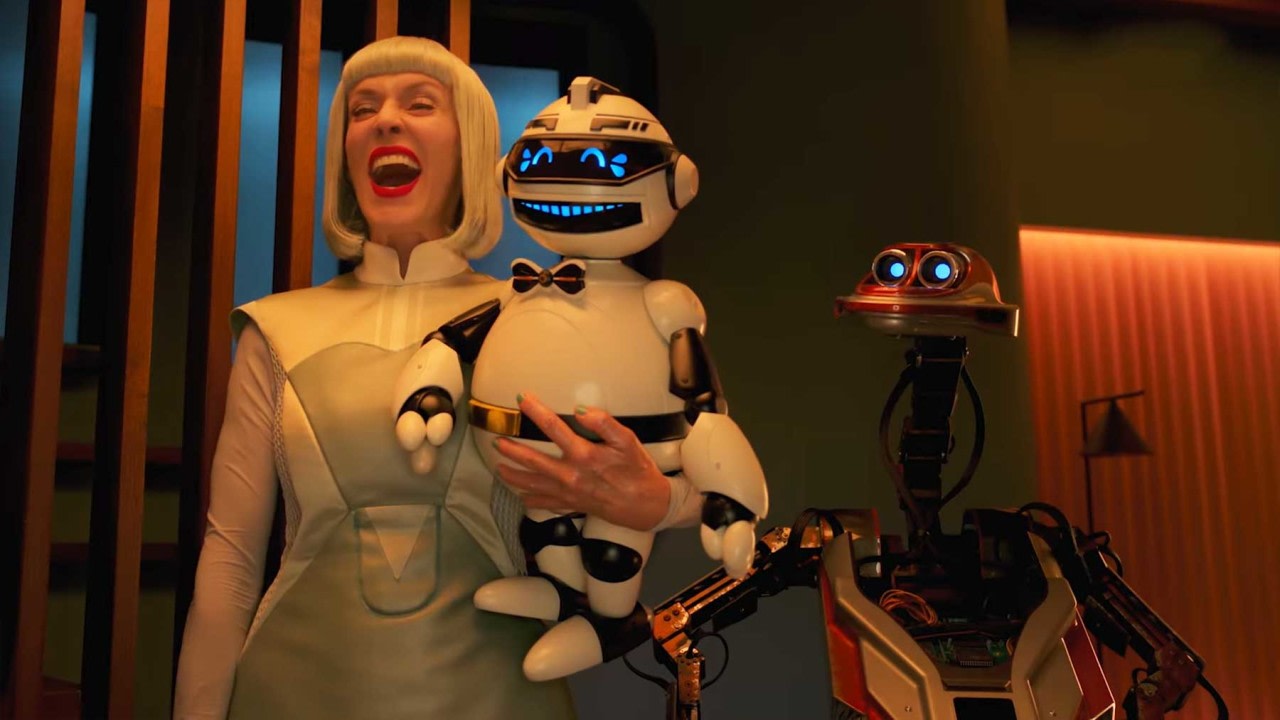 The miraculousness of Bigbug is the speed with which Jeunet immerses us in his vision of the future, which does not feel directly indebted to any previous vision despite having inevitable similarties to any number of other movies about future dystopias. This particular dystopia is bright and colourful, in keeping with an aesthetic that probably had its best showcase in Amelie. It’s impossible to feel despair for the direction we are headed as a society when seen through Jeunet’s eyes, which see this satire as a joytous tweaking of our natural human foibles – foibles that the robots we program come to share.

And what a detailed and thought-out world. There’s a certain mania with which Jeunet exposes us to his menagerie of delightful gadgets, many of which are retrofuturist in their design, and all of which are a pleasure to behold. The visual scheme for the film is first rate, as Jeunet’s feature film layoff of nine years has not left him the slightest bit rusty in his mastery of the most current available digital techniques. The helper robots are adorable, many of them fully robotic in nature, with Perron as the humanoid serving as a particularly effective conduit for Jeunet’s brand of glitchy eccentricity. While singling out performances, we shouldn’t forget to mention Francois Levantal as the primary Yonyx humanoid, his permanent grin running at odds with the menace in his eyes. 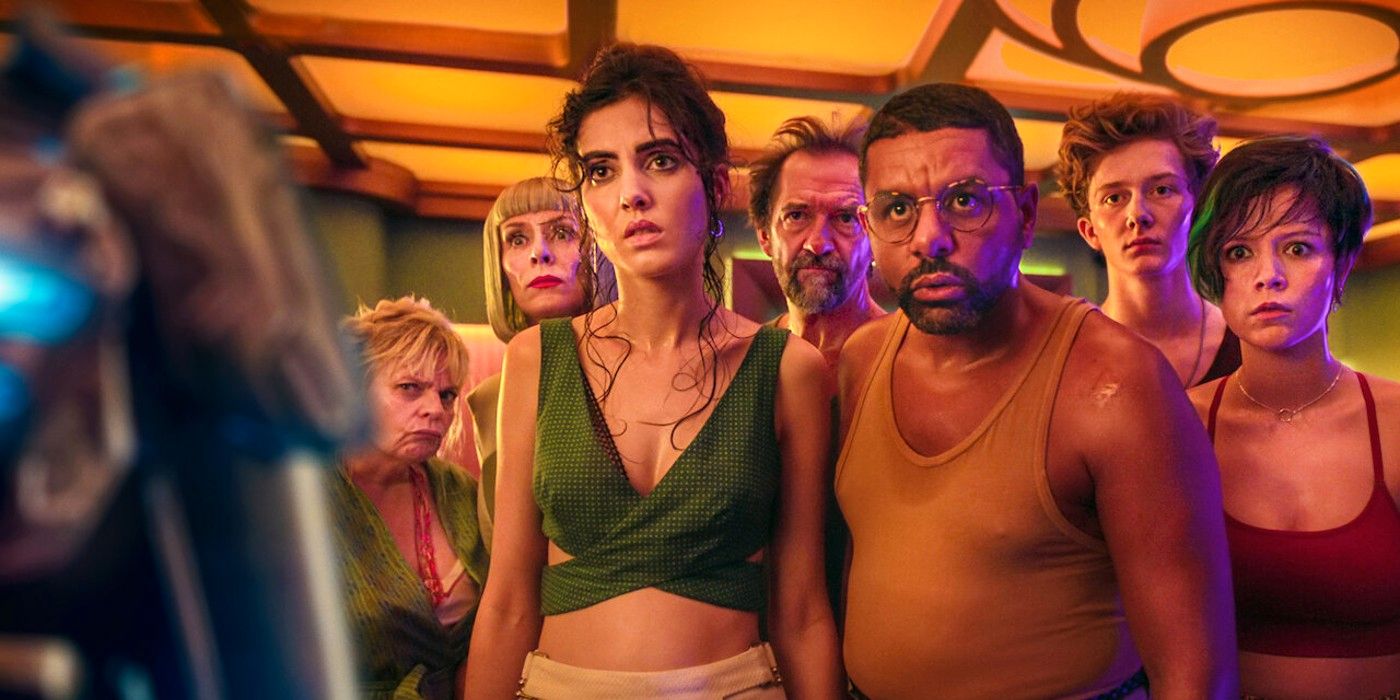 Of course the surface wouldn’t seem so shiny without the wicked satire underneath. Jeunet is spot on in his anticipation of where our current increasing reliance on smart robots might take us, which is probably more of a best-case scenario than a worst-case. Bigbug depicts the helplessness that sets in when a machine makes your every meal, computes your every calculation and solves your every riddle – riddle solving being a key component to this story. The characters are then understandably deficient in a number of key ways related to their personalities and capabilities, but not in a cyncial way, as Jeunet maintains enough of a love for them to keep us barracking for them. 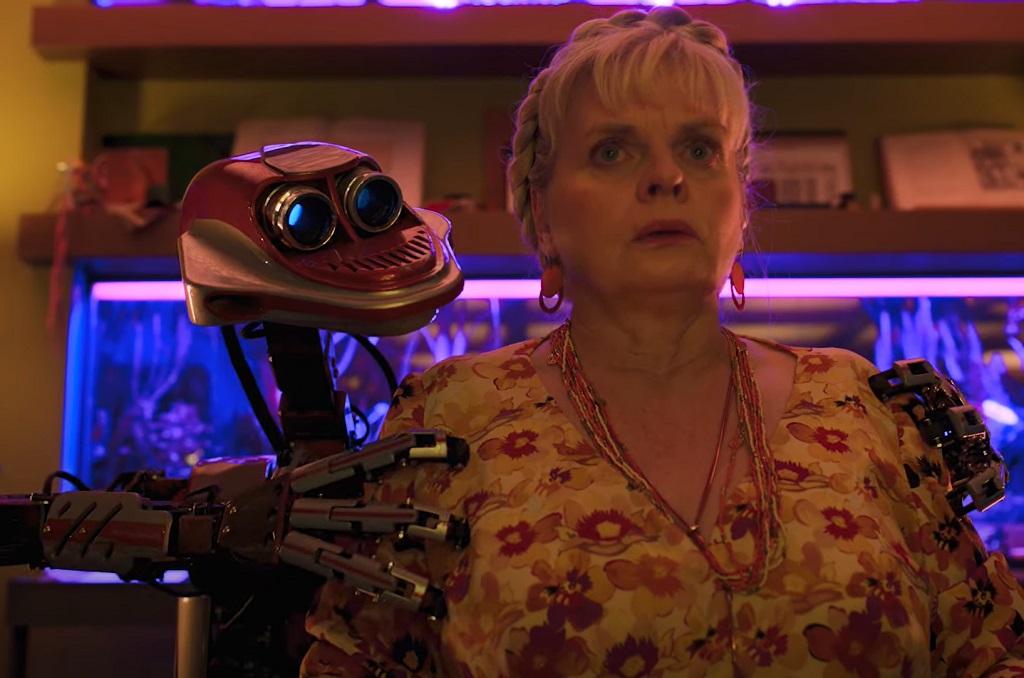 And then there’s the sex. It’s not explicit in the slightest, but boy is it everpresent, as everyone in the house is trying to get with someone else — even the robots, usually with a human rather than each other. This is perhaps the film’s most distinct echo of Delicatessen, which features an entire unforgettable sequence that’s a symphony of bed springs and ecstasy as characters fornicate deliriously around the apartment building. It’s not the only echo of the long-lost beginnings of Jeunet’s career, which don’t feel so long lost anymore.

Bigbug is currently streaming on Netflix.