"It’s a lot like Don’t Look Up in terms of being a timely, in-your-face satire that seems to be seriously turning off a large portion of its Netflix audience."

"To suggest Apatow is going for some other tone and missing it is kind of like saying Cliff Beasts is supposed to look like a legit Hollywood franchise instead of cheap dinosaur effects against a green screen."

The recent best picture nominee Don’t Look Up has drawn a line in the sand between those who like ostentatious, star-studded satires and those who really, really don’t. The best picture nomination may suggest otherwise, but the conversation surrounding Don’t Look Up, on social media anyway, was how awful it was – so much so that director Adam McKay had to take to Twitter to tell everyone how wrong they were about his movie. 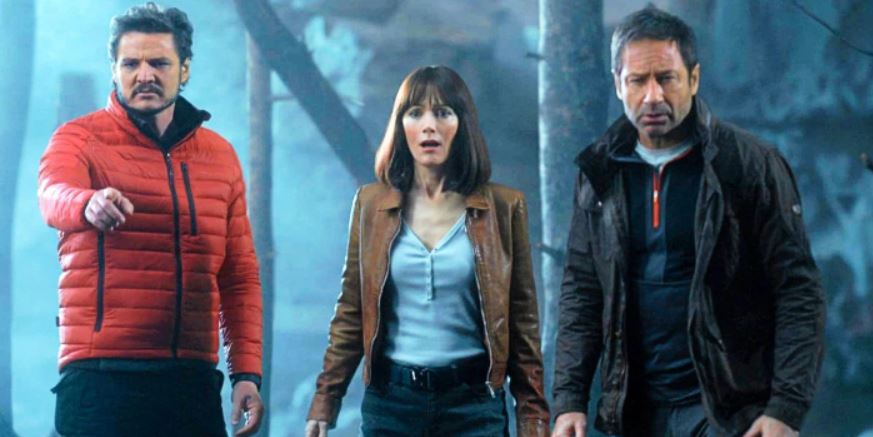 The same ratio of dislikes to likes seems to be popping up around Judd Apatow’s new film, which is not like any Judd Apatow film you’ve ever seen. In fact, it’s a lot like Don’t Look Up in terms of being a timely, in-your-face satire that seems to be seriously turning off a large portion of its Netflix audience. Apatow’s films in the past may have contained satirical elements, but they were much more likely to constitute a generally sweet blend of family dynamics and gross-out humour that remained fundamentally earnest in its intentions. Maybe the audiences expecting more of that are the ones so put off by The Bubble, which takes all the piss out of a variety of Hollywood types trying to make a COVID-safe movie, the latest in a soulless franchise about dinosaurs called Cliff Beasts. This is precisely why some of us think it’s such a hoot.

Although the conditions of our dwindling pandemic have informed a number of movies the past few years, we haven’t gotten many that pushed those themes past the vagueries of metaphor. The Bubble not only fully invokes COVID – referring to it by name rather than through euphemisms like “the virus” – but it also dives deep into the mechanics of COVID avoidance that have become familiar to all of us. The scene where a variety of familiar faces – from Karen Gillan to Pedro Pascal to David Duchovny to Keegan-Michael Key to Leslie Mann – squirm away from a particularly intrusive cotton swab that’s trying to test them, and their cacophony of gagging coughs that result, is either too close for comfort, or just the sort of hilarious release the right sort of audience has been waiting for.

Cliff Beasts 6 is the movie this crew of actors, plus their loopy director (Fred Armisen), couldn’t wait to shoot until after the contaminated air had cleared. None of them has any illusions about the quality of the series, and Gillan actually begged off the last one, only returning to this one with her tail between her legs to rejuvenate a flagging career. But they do have a director who won at Sundance for the movie he shot in the Home Depot – the American equivalent of Bunnings – where he worked. Plus an eager executive producer (Peter Serafinowicz) and a smiling studio head (Kate McKinnon) who threatens to kill you without ever dropping her smile … and has managed to take a ski holiday during what is COVID lockdown for the rest of the world. She’s all too aware that Tom Cruise has the only other film in production, and she just has to beat him. (Which also has the effect of invoking another wicked Hollywood satire, Tropic Thunder, in which Cruise cameo’d as an equally reprehensible studio exec.)

So the cast and crew gathers for a 14-day quarantine prior to entering the London-area bubble where they will freely make the movie – or so they hope. A Tik Tok star with 120 million followers (Apatow’s daughter Iris) has been added to the cast in a naked attempt to build the audience, and she’s just one of the reasons sparks fly on the set. Among others are the on-again off-again relationship between Duchovny’s and Mann’s characters, various cast member’s attempts to sneak out of quarantine, and Pascal’s character wanting to hump anything in sight – particularly a clerk at the hotel where they’re staying (Borat’s Maria Bakalova). 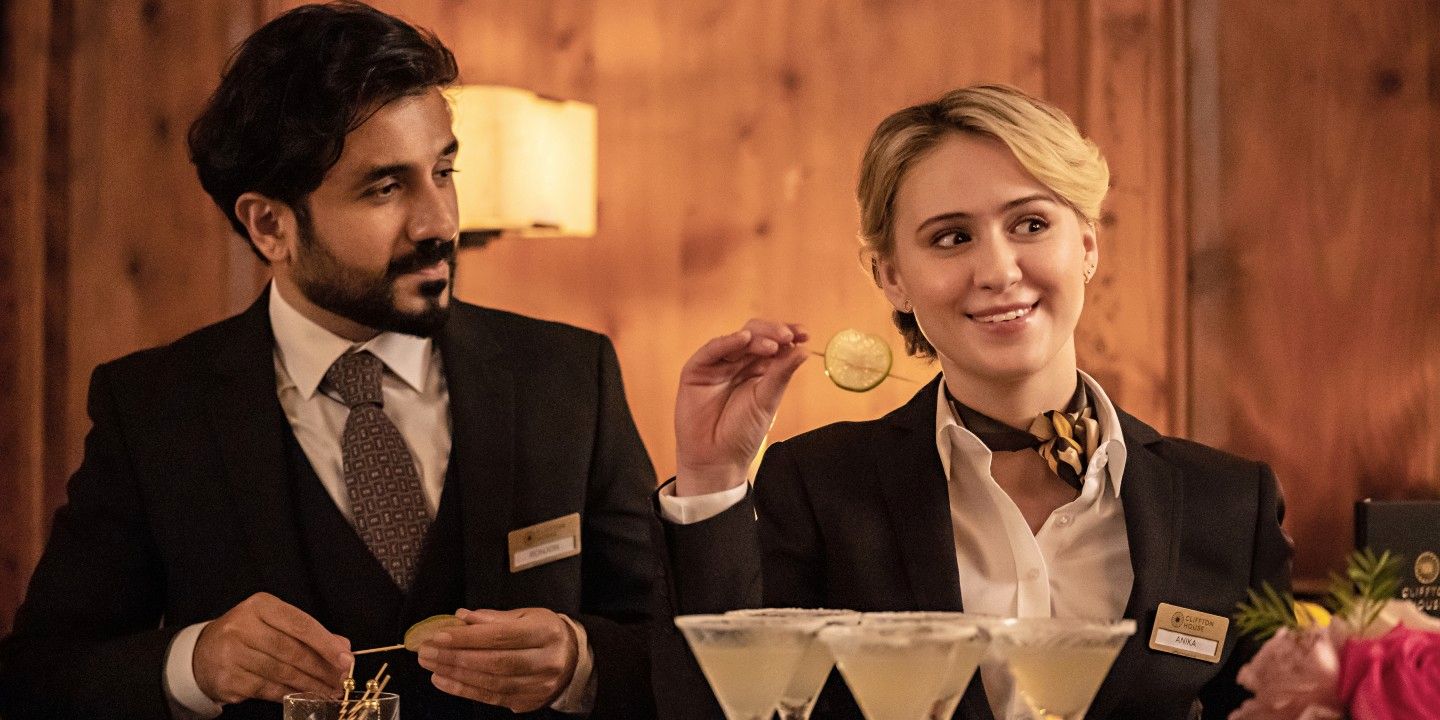 The Bubble is unsubtle and absurd, and that’s exactly as it means to be. To suggest Apatow is going for some other tone and missing it is kind of like saying Cliff Beasts is supposed to look like a legit Hollywood franchise instead of cheap dinosaur effects against a green screen. Some audiences may not connect to its essentially insiderish quality, but The Bubble is hardly the first film to skewer the inner workings of Hollywood filmmaking and roast them over an open fire. There’s an acerbic spirit to this roasting that’s present in character traits, in lines of dialogue, and in precisely realised details that prompt the viewer to spit out explosions of involuntary laughter.

This viewer, anyway. There’s no accounting for taste when it comes to humour, and there never has been, so sure, this giddy form of self-deprecation may seem indulgent to some, even while it’s tickling others pink. What shouldn’t be arguable is whether or not Apatow just tossed this off in his spare time. These jokes are sharp, always committing errors of commission rather than omission, if they commit errors at all. They are busy pricking the fragile egos of movie stars and the militant profit-seeking of studio types, and all of those observations land. Plus, just to add a little unexpected spice, you have characters like the set COVID safety officer, played by gangly redhead Harry Trevaldwyn, who casually speaks of the three times he had COVID – once almost imperceptibly, the last resulting in the loss of taste and smell, and, oh by the way, the middle one leaving him in a coma. 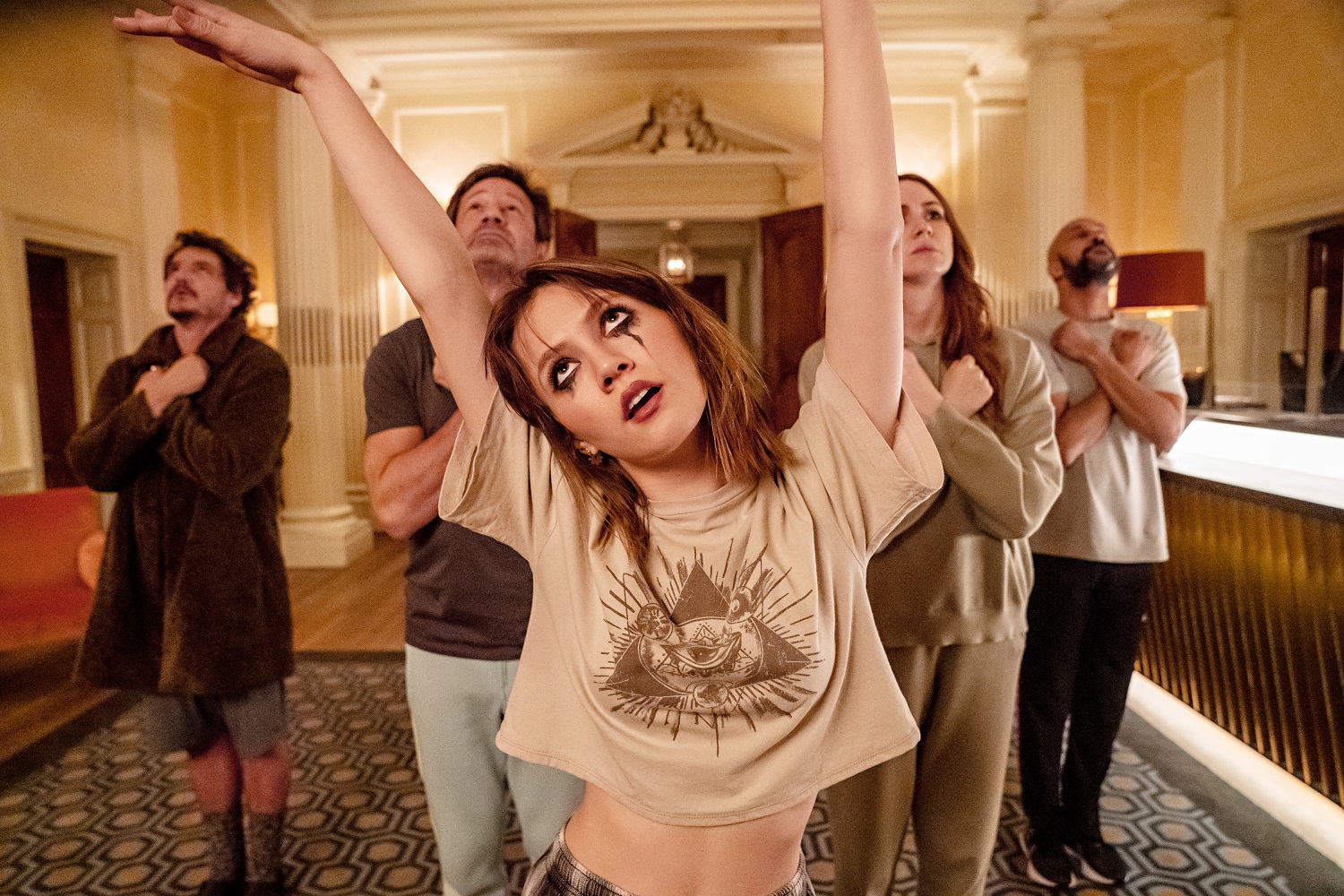 We’ve gotten enough distance from this pandemic to laugh at the new norms that have cropped up around it, and Apatow decided he was the one who wanted to deliver those laughs to us. It’s not his usual mode, but give the guy a break – he’s already made his Seth Rogen movies and now wants to try something different. If it seems like I’ve spent this entire review defending it against perceived criticisms that a contemporarily published review is not supposed to be aware of, well, it’s movies like The Bubble that inspire you to tear down the thing you love from the inside. Go on, tear off a chunk.

The Bubble is currently streaming on Netflix.