"There’s just not a lot of 'there' there, especially when that protagonist makes herself pretty difficult to like."

"Peg’s victims are people who are, in many cases, worse off than she is."

There are many films that function as a love letter to a particular American city. In fact, the city of Buffalo, New York, already has one, albeit a scruffy and misanthropic one, in Vincent Gallo’s Buffalo ’66. That film is even more obsessed with the local football team, the Bills, than the new film from director Tanya Wexler, Buffaloed. This time out, the Bills take a backseat, in terms of quirky regional preoccupations, to a debate over which local institution makes the better version of the city’s signature chicken wings.

It’s all well and good, especially for the viewers who live there, to make a movie heavy with inside jokes and Easter eggs. This continues with the regional accents, which kind of resemble the Minnesota accent, and people’s tendency to smack each other with the be-all and end-all insult by calling each other a “jagoff.” But the film still has to do something other than loving parody, and this is where Wexler’s film falls down a bit. It’s a send-up of the debt collection industry, a shady line of work if ever there was one, and our wily protagonist who finds herself sunken deep into it. There’s just not a lot of “there” there, especially when that protagonist makes herself pretty difficult to like.

Zoey Deutch plays Peg Dahl, who shows an aptitude for business from an early age. With Peg, it’s a fine line between business and scamming. Her family is very poor – her father regularly gambled away their money before he died – so while getting in to a good business school is not a problem for Peg, paying for it is. Given her, shall we say, morally relaxed attitude, Peg doesn’t fret too much about the decision to print forged tickets and sell them outside of Bills games. She doesn’t have the same forethought for self-preservation as she does for sales, though, and soon she’s arrested and doing time.

Business school is off the table when Peg emerges from prison. While banging around figuring out what to do with her life, Peg fields a call from a mulleted debt collector working in a seedy warehouse that also happens to be in Buffalo. He’s trying to track down the nearly $50,000 she owes from various legal fees related to her trial, but he shows his hand by telling her he’ll accept a fraction of what she actually owes, and that he gets a ten percent commission on whatever he collects.

Dollar signs appear in Peg’s eyes, as she realises debt collection is just another type of sales – one that sells, in effect, relief from the burdens of debt. She’s soon diving head first into the local sweat shop run by the rotten Josh Wisenewski (Jai Courtney), who will use any means necessary to part a mark from his money – legal or illegal – and will even collect the same debt more than once if possible. Before long, Peg is wholeheartedly participating in the same business of ruining lives that has been a thorn in the side of her own mother and brother (Judy Greer and Noah Reid).

If you assumed Buffaloed were based on a true story, that would be logical, as its comic style is clearly inspired by such recent reality-based hits as The Big Short and Hustlers. Peg participates in a fourth wall-breaking style of communication to explain how debt collection works, and how it can be profitable even when most people can only pay a fraction of what they owe. The movie needed either less or more of this. We don’t really get enough to understand the industry, only enough to undermine what is otherwise a straightforward style of narrative.

The reliance on Deutch as our surrogate is a bit of a miscalculation as well. She’s not charming enough to make us forget that within a world of egregious moral compromise, Peg is pretty compromised herself. We feel for the hustlers in Hustlers because their victims are asshole Wall Street types who cheat on their wives. Peg’s victims are people who are, in many cases, worse off than she is. There’s not enough good behaviour on her part to mitigate these crimes. We can see why the handsome district attorney (Jermaine Fowler) who’s gotten involved with her – who was actually the prosecutor on her ticket forgery trial, naturally – wants to distance himself from her when it’s clear she won’t change. We can’t see what attracted him to her in the first place. 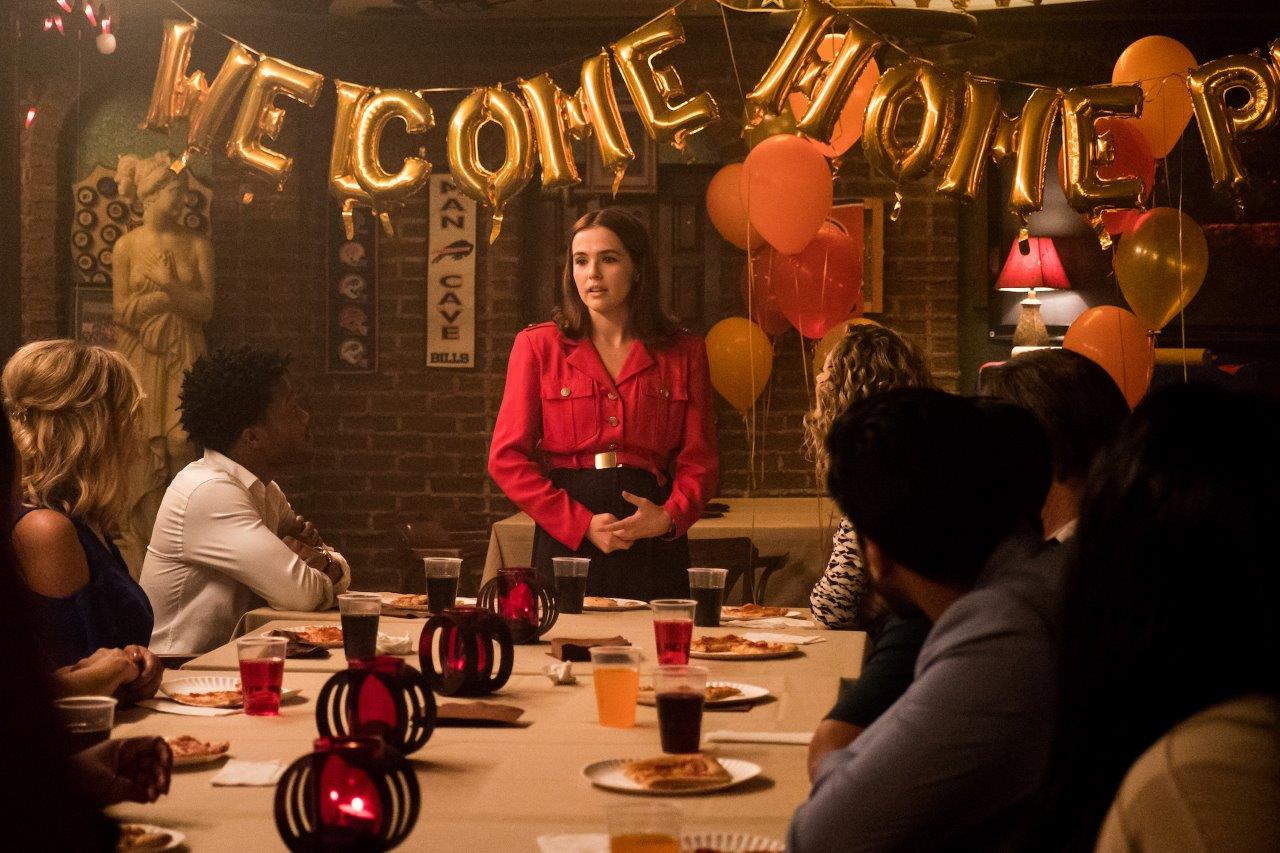 Buffalo is the best part of Buffaloed. The eccentricity of the life depicted here feels, if not exactly real, then at least true in some way. You don’t necessarily believe that a judge would eat a messy wing lunch while sitting on the bench, nor base his judgments on the wing preferences of the attorneys. Judy Greer running a nail salon out of her house, which only ever seems to have the same one customer, does not totally jive with reality. Still, they are likeable atmospheric details in a comedy that indulges in pleasant exaggerations. 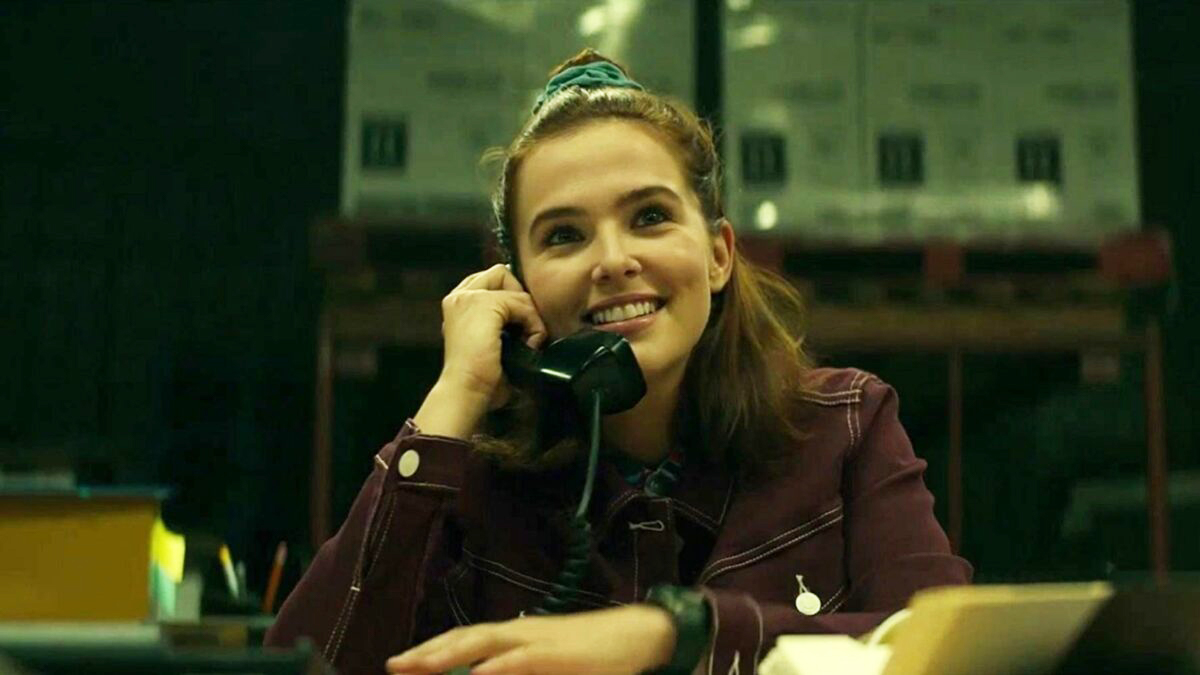 But this movie has too many jagoffs, and not the writing to make them pleasurable to endure. Aussie Jai Courtney is giving a good slimeball performance, but the movie doesn’t create the conditions for him to shine. Buffaloed is a bit like the debt collection industry itself, enclosed in a sweaty boiler room of desperation. As such, it’s incapable of being truly funny, even with everyone trying just as desperately to make it so.