"There are a lot of bad films out there but Collateral Beauty is a very bad film."

"Collateral Beauty is a morally bankrupt film because it exploits the loss of a child and the grief of a parent to conjure up shallow and thoughtless schmaltz."

Perhaps Collateral Beauty was made with the best of intentions but also perhaps not. It’s a murky world over there in Hollywood, so who’s to say for sure? The film will undoubtedly attract negative attention from punters who can smell Oscar bait from a mile away. They say a picture speaks a thousand words. The poster for Collateral Beauty certainly speaks quite a few, although none of them are positive. There are a bunch of faces, all of them recognisable actors and all of them gazing in various directions with expressions that are presumably intended to convey wisdom but sort of just look a bit dim. In bold words, the title reads ‘Collateral Beauty.’ If the poster is enough to trigger a sense of caution, then this film isn’t for you. If the poster doesn’t trigger that caution, there’s still a pretty big chance that Collateral Beauty isn’t for you.

There are a lot of bad films out there but Collateral Beauty is a very bad film. It’s also very manipulative, which doesn’t matter in some films, but does here. Part of me resents the way in which Richard Curtis’ Love Actually exploits me emotionally but part of me is happy to be taken along for the ride because it’s fun and it’s engaging and not every film needs to be a Bergman. All of me found Collateral Beauty repellent. Where it seeks sympathy it begets disgust, where it tries to be sentimental it incites dispassion and where it wants to warm the heart all I wanted to do was throw up. I’m not being hyperbolic when I say that Collateral Beauty inspired nausea in me. 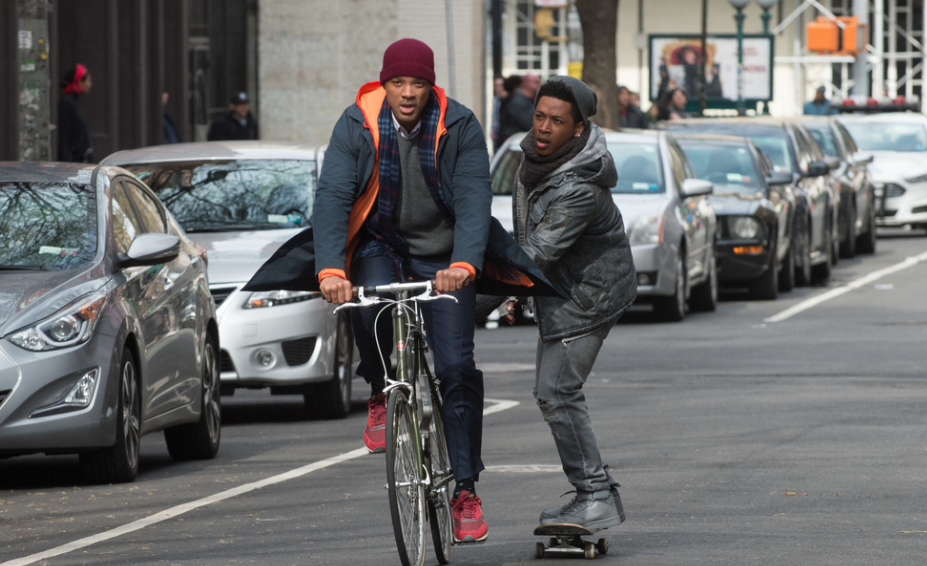 Will Smith plays Howard Inlet, which I think is a funny surname, but that could just be me. He’s a successful New York advertising executive who we’re told is very brilliant but who also never does anything to support that assertion (although at one point the camera pans over a pile of books that he is reading and they’re all smart people books – that’s bad film shorthand for smart). Inlet loses his daughter and becomes a semi-crazed recluse who shows up to work only to construct elaborate domino arrangements. He’s also writing letters to Death, Time and Love, the three factors he once viewed as crucial to successful advertising.

Howard’s  behaviour is putting the company at risk, so his colleagues Whit Yardsham (Edward Norton), Claire Wilson (Kate Winslet) and Simon Scott (Michael Peña) cook up a plan that stretches credulity beyond the point of incredulity. They have intercepted the letters, and decide to hire three actors, Brigitte (Helen Mirren), Aimee (Keira Knightley) and Raffi (Jacob Latimore) to portray Death, Love and Time respectively. The idea is that Whit, Claire and Simon will secretly film Howard’s interactions with the three actors, then digitally remove those actors and show the footage to the board to get Howard voted off. Right.

Who could have ever predicted that the three colleagues trying to rid themselves of Howard and his issues all have issues that need to be worked through themselves. Because that’s life, isn’t it? We all have issues and it’s important to meet them head on. Shucks, lucky Collateral Beauty has come along to help us navigate the labyrinth of existence. Nope. Collateral Beauty is a morally bankrupt film because it exploits the loss of a child and the grief of a parent to conjure up shallow and thoughtless schmaltz.

The mystery of Collateral Beauty is how actors as wonderful as Kate Winslet, Edward Norton, Helen Mirren, Naomie Harris and the exceedingly likeable Michael Peña (the only one to emerge from this performance shitstorm unscathed) signed up to this drivel. Smith is less of a mystery, because he has a number of Oscar bait-lite notches along these lines on his belt already. What does ‘collateral beauty’ mean? It’s explained, briefly and ambiguously. I’m inclined to believe that the ambiguity is intentional because under any degree of scrutiny the phrase sort of just ends up like the movie, which is a big nothing. Collateral Beauty sucks.