"You would expect a movie like Colossal to have a sense of humour, or at least be fun. "

"Only Tim Blake Nelson attains a modicum of respectability by just being his likeable old self..."

If you type the word “colossal” into your phone and then thrice select the middle option for the next suggested word, you get “colossal waste of time.” Writer-director Nacho Vigalondo surely intended the title of his new feature, Colossal, as a reference to the size of the kaiju that populate it, but few phrases could more aptly describe this movie. Vigalondo struck gold with the self-contained and twisty time travel thriller Timecrimes, but bombed hard with his English-language debut, Open Windows. With Colossal, he’s still bombing.

The fact that there are kaiju in this movie is not a spoiler, it’s a poorly kept secret, or maybe not a secret at all. In order to sell a movie like this, you have to let audiences know that giant creatures will be destroying a city in Asia – otherwise, it’s just a movie about an alcoholic woman trying to figure out her life after her boyfriend kicks her out. That woman is Gloria (Anne Hathaway), a hot mess who tries to reclaim some part of the person she once was by moving back to her hometown. There she gets a job at a local bar, owned by a childhood friend/possible love interest, Oscar (Jason Sudeikis). A cold open involving a reptilian behemoth looking down upon scared Korean schoolgirls ruins some of the surprise, but Gloria’s story is not merely local. Turns out that by standing in a particular playground at exactly 8:05 a.m. on any given morning, she can make this reptilian behemoth materialize in Seoul, and inadvertently start wreaking havoc merely by the movements of her body. It’s like she’s playing Dance Dance Revolution, only the dancer is a giant monster. 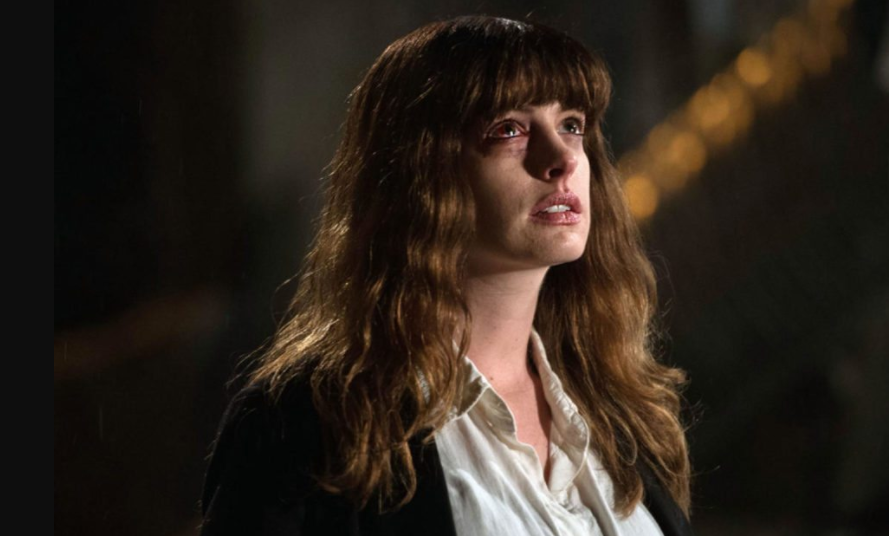 Funny, right? No. You would expect a movie like Colossal to have a sense of humour, or at least be fun. It hasn’t any of the former and is none of the latter. Instead, Vigalondo makes the intensely weird decision to pursue impotent male rage as a social issue in his mashup of a monster movie and a domestic drama. For reasons known only to Vigalondo, Oscar is bubbling over with anger that he directs at Gloria without cause or explanation. And then he materializes as a giant robot, and they fight.

Pacific Rim this is not. Scarcely do we even see the two oversized Korean combatants, let alone see them do anything awesome. They are basically as anonymous as the hordes of fleeing citizens of Seoul, who never think to abandon the city despite the repeated catastrophic appearances of these moving skyscrapers who crush them like ants. I repeat: How can this movie not be fun?

Trust me, it isn’t. It’s got laughable tonal problems as Sudeikis becomes increasingly unhinged throughout the narrative, more and more chips stacking on his shoulders as he tries to prove to Hathaway that she’s not better than he is because she left their sleepy little town to move to New York. Alcohol is some explanation for his behaviour, as it is for hers, but there’s just no justification in the story for why he transforms from a welcoming friendly face into a sardonic boor who takes sadistic glee in forcing her to do things. The movie holds off as long as possible on introducing actual male-on-female violence into the equation, but when it does come, it only sours the mood further.

It seems likely that Vigalondo has an honest interest in considering the scourge of domestic violence (though these two characters are not in a relationship), and believes that his ultimate message of female empowerment will serve a greater social good. But it’s handled so clumsily that it only draws attention to his unclear thinking and poor execution thereof. You can’t explore something as deadly serious as men who physically and emotionally abuse women through something as inherently B-movie fantastic as giant creatures who fight each other. Either could make for a good movie separately. Together, they ruin each other. 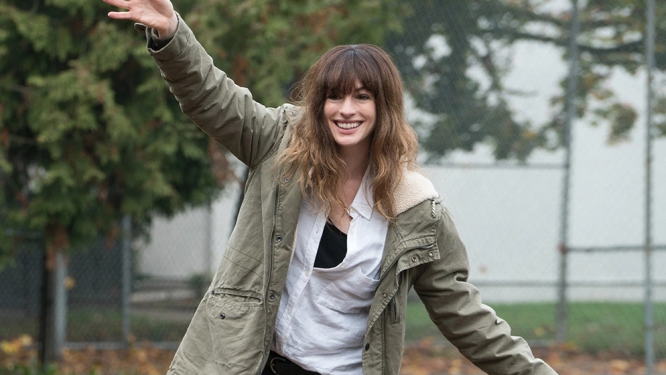 The cast does not help. As broadly as Hathaway and Sudeikis play their roles, Austin Stowell is equally blank as another potential suitor for Hathaway. Then there’s Dan Stevens as yet a third suitor, playing the thankless role of superior English prig. Only Tim Blake Nelson attains a modicum of respectability by just being his likeable old self, though in an another example of the story’s dunderheadedness, he gets prematurely dismissed from the plot as a result of one of Sudeikis’ meaningless rages.

As this movie has been receiving generally positive reviews, one has to wonder if the majority of critics were just so tickled by the idea that they forgot to actually see the movie to find out if it works. An idea will only get you so far. If you don’t have solid execution, decent editing, a sense for how to structure a narrative and a knack for making us laugh, that idea is just a colossal waste of our time.