A film that squanders its potential is a far more frustrating viewing experience than a film that is wholly bad. Django Unchained, the latest film from Quentin Tarantino, promises a great deal but is ultimately encumbered by the director’s inability to sit still. Much of your enjoyment of the film will depend on your ability to embrace Tarantino’s unconcentrated filmmaking style. 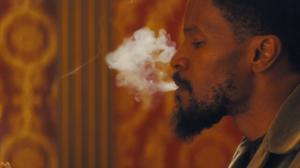 Django Unchained is a Western, more Leone than Ford, although the film is really set in the South. It’s two years before the break out of the Civil War and atrocities towards slaves are rampant. Tarantino has defended his brutal depiction of slavery, stating that the reality was far worse and I’m inclined to agree that any easy film about slavery would be a disservice to those who suffered. But Django Unchained is still difficult to watch.

Discussing the violence in the film is unproductive. It has become one of the defining characteristics of Tarantino’s work. There’s a lot of it in Django Unchained, I didn’t enjoy it at all, but it’s nothing we shouldn’t expect. Any complaints about violence in a Tarantino film are about twenty years too late. As the man himself said, ‘you don’t go to a Metallica concert and ask them to turn the volume down.’

The story follows Django (Jamie Foxx), a slave who is separated from his wife Broomhilda (Kerry Washington), after they’re caught running away together. Django is bought and subsequently freed by bounty hunter Dr. King Schultz (Christoph Waltz) because he happens to know information about the three outlaw brothers Schultz is hunting. The pair strike up a friendship, and Schultz begins to feel obliged to help Django rescue Broomhilda from her owner, the villainous Calvin Candie (Leonardo DiCaprio) and his blackhearted servant Stephen (Samuel L. Jackson). There’s an amazing film in there somewhere, but this isn’t it. 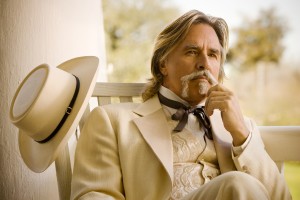 This is the arguably the most narrative-driven film Tarantino has made to date and his discomfort with structure is apparent. There are some fantastic sequences, such as the long journey to Candieland, DiCaprio’s desolate plantation almost reminiscent of Kurtz’s compound in Apocalypse Now (1979). But the film feels inappropriately episodic. The final act would be entertaining as an isolated short film, but feels totally unnecessary within the context of the film as a whole. Considering the film’s lengthy running time, this whole section could have been culled in favour of developing the fairly thin characters. There is also an unfortunate cameo from the director himself. I don’t believe anybody thinks Quentin Tarantino can act except Quentin Tarantino.

Tonally, the film is disorganised. At times Tarantino seems to want to examine slavery seriously, at other times he’s preoccupied with referencing the classic films that served as inspiration. Sometimes the blending of moods works. More often than not it means we don’t ever really care about anything we’re seeing. Django Unchained always threatens to settle into something more interesting than linked vignettes, but Tarantino’s attention moves on before we can latch onto anything. How are we supposed to feel when in one scene an African American slave is being brutally whipped and in the next people are getting their penises shot off? Who knows? I doubt Tarantino gave it much thought. 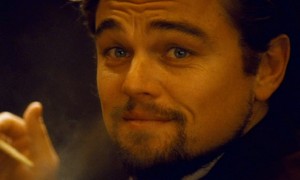 The film is full of homage, and while Tarantino’s knowlege of cinema is remarkable, it often hinders Django Unchained from becoming a film in it’s own right. I had the same issues with the Kill Bill films, particularly Volume 1, which to me was more of a series of interesting moments rather than a cohesive film.

This review is harsher than the film deserves. Django Unchained is an entertaining piece of cinema, with some good performances and some great scenes, but then entertainment has never been a problem for Tarantino. I can definitely recommend the film, especially for fans of the filmmaker’s previous work. Unfortunately, the hints of a film Django Unchained could have been are impossible to ignore.