"Imagine Downey giving a gorilla crap because he’s addicted to bananas or has a hairy butt."

"What is it about casting talented comedians as animals that robs them of their best selves? "

Robert Downey Jr.’s best mode is when he’s taking the piss out of a kid. It sounds cruel, but I think you know what I’m talking about. Think about his interactions with the kid in Iron Man 3, or any time he has a conversation with Peter Parker. He thrives on disarming young people by treating them with the opposite of condescension. Downey reserves the same type of smack talk for kids as he would adults, maybe making the content a little more PG but never dialing back the sick burns just because he’s worried about their precious little ears. He respects them enough to know they can handle it. It works and it’s usually really funny.

Dolittle should have been that with animals. Imagine Downey giving a gorilla crap because he’s addicted to bananas or has a hairy butt. These animals would look at him funny and then give as good as they get in their own language, only we can’t understand what they’re saying because, well, they’re animals. But Dolittle can understand them, and with whip-smart comic timing he’d throw another piece of vicious ammunition right back in their face. Maybe this time it would be telling an ostrich he’s an inadequate bird because he can neither fly nor swim. 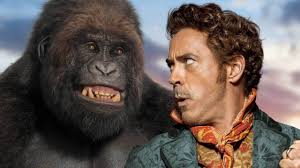 This is not what Dolittle is. Dolittle is a movie where Robert Downey Jr. puts on some kind of unplaceable accent – is it Irish? Is it Eastern European? – and plays a Character with a capital C. You can understand him wanting to leave Tony Stark behind, but maybe he shouldn’t have left, you know, all of Tony Stark behind.

As bad as he is in this role, and Downey is bad, it’s nothing compared to what they’ve done with the animals. They speak English because maybe that was the only way you could really do it and still connect with the youngest tots in the viewing audience. But once the first one of these animals opens his mouth – or maybe her mouth, as the film is narrated by a parrot played by Emma Thompson – you want him or her to shut up. Tom Holland even voices a dog with spectacles, in an abortive attempt to draw out some of his rapport with Downey, but there’s no Iron Man vs. Spider-Man sizzle here.

What is it about casting talented comedians as animals that robs them of their best selves? Certainly it’s the writing, writing they would crush into a ball and throw into the nearest bin if they were asked to bring it up on stage for a stand-up set. But it may really be that when they are given such a short time to shine and to ingratiate themselves with the audience, and that time is crammed into some kind of daffy CGI chase scene or set piece in which all the furniture in a room is being upended, the only thing that comes through is the broadest version of whatever the shtick was that made them famous. If they are a member of any kind of racial minority, it just makes it all the more uncharitable.

This Dolittle goes outside the modern-day veterinarian milieu of the most recent filmed version of this character, played by Eddie Murphy, who has also slummed it as unfortunate talking animals. It restores the action to 19th century England, the setting of Hugh Lofting’s original children’s stories, in which the eccentric animal doctor lives in a mansion covered with moss as he’s forever mourning the loss of his wife, who died in a shipwreck years earlier. He’s jolted back out of his indifference when a young, unwitting hunter (Harry Collett) brings to him an injured squirrel whom he shot while trying to intentionally miss his airborne target. Plus, there’s this whole bit about Dolitte possibly losing his eccentric, animal-covered acreage if the queen dies. Time to shave that beard and stop pissing away your life. 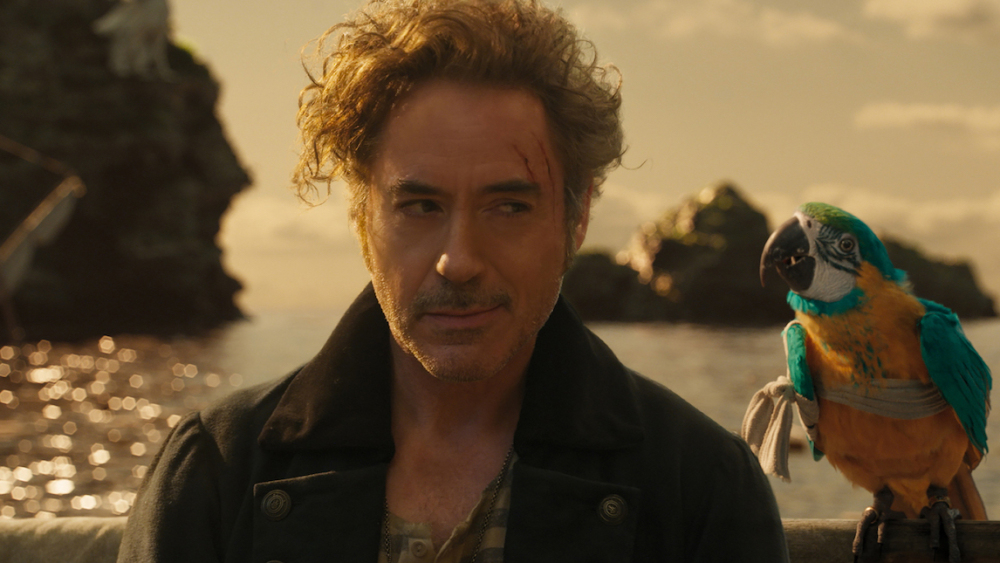 Because so much emphasis is placed on Dolittle’s heartbreak in the film’s animated prologue, you expect some exploration of his grief to be the film’s sentimental underpinnings. Downey makes that impossible. Oh, that bit is in the script, but a viewer can’t possibly feel warmth or pity toward the character because he’s such a bloomin’ goofball. Think Johnny Depp left to his worst instincts and maybe also a little drunk. In fact, that may have actually been what Downey was thinking, as it seems likely someone figured they could wring a little early-days Pirates of the Caribbean charm out of this movie. There are ships with big sails and asshole British soldiers and everything.

Their mission is to find some mythical land with a mythical tree whose mythical fruit will serve as the antidote to the poison that has been filling the tea cups of the queen, whom prats played by Michael Sheen and Jim Broadbent want to overthrow. (Oh, the list of people laid low by this film just gets longer and longer. You can add director Stephen Gaghan, who, very improbably it now seems, once wrote and directed Syriana.) It’s the very mythical land Dolittle’s love was seeking when she was shipwrecked. 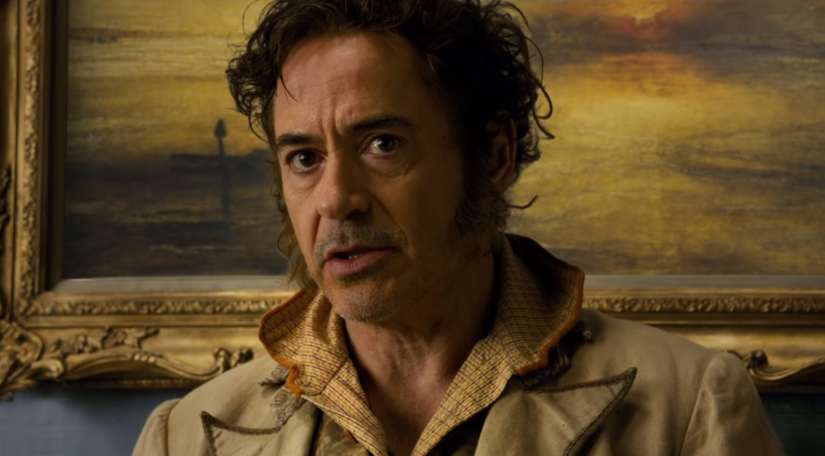 So Dolittle takes the kid (who has no personality or character development) and a bunch of his most impractical animals aboard his ship in search of it. Because, you know, a polar bear wearing a winter hat is just who you need in that situation, and a giraffe will certainly come in handy somewhere. It’s even better if they can yell lines like “Hate the game, not the player!”, which I don’t think is an actual line in the movie, but it’s the type of line these animals are forced to spew out every three-and-a-half minutes.

The one animal creation, actually an insect, that sort of works is Jason Mantzoukas as a dragonfly with crazy eyes. They sort of get the CGI right on him – an outcome never realised elsewhere, especially in the case of the parrot – and Mantzoukas seems to have been the only one who knew how to take the thing he does and not make it annoying. That one dragonfly-sized element works, in a film this overstuffed and bloated, is the kind of thing Tony Stark would totally give this movie shit about.