"Payne set ups potentially compelling conflicts and then abandons them once the sight gags are worn to the nub. "

"...it's a total mystery why the filmmakers decided to bother pursuing a central conceit with such potential."

It takes a lot of creativity, intelligence and energy to make a good film, as any filmmaker will tell you and any avid film lover will attest to. For the past two decades, Alexander Payne has been consistently producing excellent films; a constancy that suggests a rare aptitude when it comes to filmmaking. Most great filmmakers have made a lot of bad films, a snag that Payne has to date managed to elude. Downsizing is his first misstep, and it’s a large one…pardon the pun. 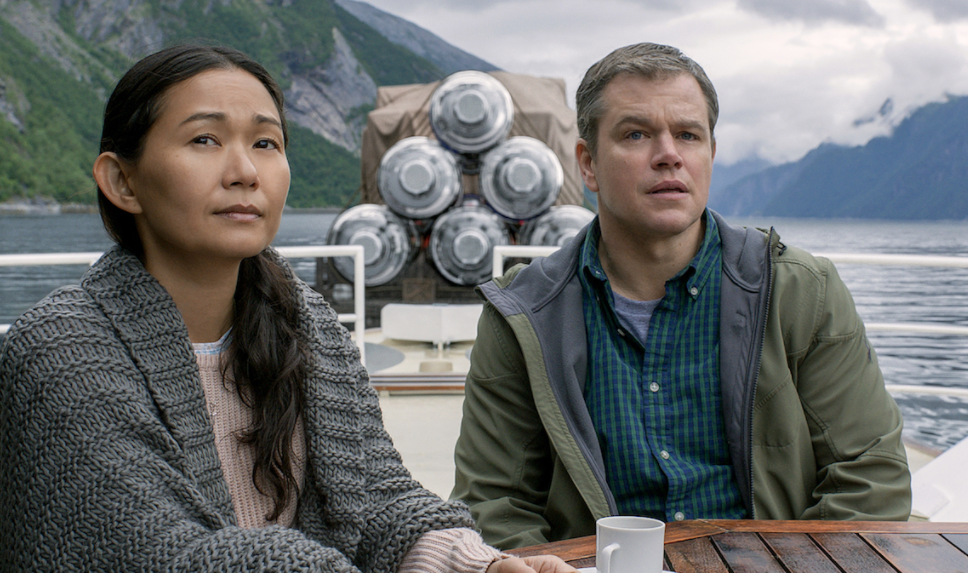 Damon plays Paul Safranek, a man living in a world in which Norwegian scientists have discovered a unique solution to the problem of over-population.  A 200-year global transition is suggested, a plan to shrink the entire community down to 5-inches, integrating them into a miniature world in which resources are stretched substantially. Not only does downsizing have a significant environmental impact, but anyone who decides to downsize will find themselves vastly more wealthy than they have been as a regular-sized person. Paul and his wife, Audrey (Kristen Wiig) decided to undergo the irreversible procedure, waving goodbye to their lives as they know it.

And then, following the procedure, almost everything that occurs has almost nothing to do with the film’s central concept. Once Paul is downsized, almost the entire narrative could have remained intact if Paul hadn’t been downsized, which is a problem that’s called wasting a nice idea. Any social implications of the downsizing process or environmental themes that may be on Payne’s mind are hinted at but never really explored. Most of the film revolves around events that bear little to no relevance to what should have made Downsizing interesting.

Payne set ups potentially compelling conflicts and then abandons them once the sight gags are worn to the nub. This is when I began to really lose interest, because a 5-inch Matt Damon can only make me laugh for so long. As an example of the way in which Payne doesn’t have an authoritative grasp on his material, there is an early scene set at a bar the night before Paul and Audrey undergo their downsizing procedure (referred to colloquially in the film as ‘getting small’). A drunk patron raises the question of how fair the downsizing revolution is on the people who are left large and whether the super-wealthy downsized citizens should retain an equal vote. The issue is never raised again.

The blandness of Payne’s film is offset detrimentally by Hong Chau‘s performance as Ngoc Lan Tran, a Vietnamese dissident who was downsized against her will by her government for protesting the construction of a dam near her village. Shipped over to the U.S. in a television box (in another potentially interesting example of world-building that Payne entirely ignores after he has established it) Tran is the only survivor from voyage and has lost her leg beneath the knee in the process. 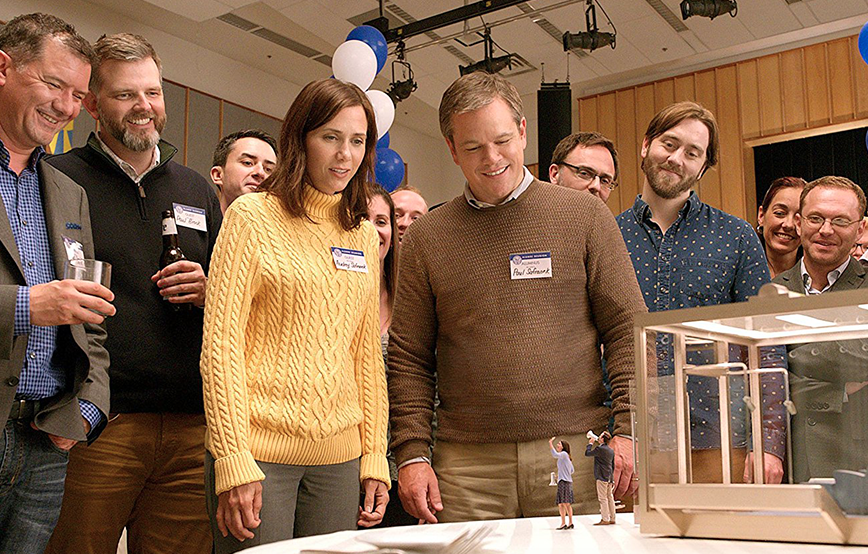 Damon’s Paul meets Tran some years after her arrival into his downsized city. She’s working as a cleaner with a primitive prosthetic. Paul and Tran connect with one another in a  manner that would have been painfully tedious if it hadn’t been for Chau’s performance. I don’t mean that as a compliment. If you found Johnny Depp’s Tonto in The Lone Ranger unwatchable then the last two-thirds of Downsizing will be even more problematic for you. Chau’s heritage is Vietnamese, but her performance her certainly isn’t doing racial stereotypes in Hollywood any favours. The moment she arrives in Downsizing, an already unsteady film becomes enormously tone-deaf and unwatchable.

Whatever Payne is trying to say with Downsizing, he is saying it through scenarios that don’t reflect reality or possibility, and his meaning reflects neither reality nor possibility. The vague environmental subtext is rendered completely naff in its ambiguity and everything else except Chau’s lamentable Ngoc Lan Tran is executed in such a lazy, bland manner that it’s a total mystery why the filmmakers decided to bother pursuing a central conceit with such potential.