Do you remember when Disney wasn’t making good films? It happened. Somewhere around the Emperor’s New Groove, Disney’s animated output was mediocre, even downright bad. There was a point where Michael Eisner threw up his hands and said ‘fuck it, no more animation.’ It wasn’t even that long ago, but the gap feels wide.

This is right around the time that Pixar and Studio Ghibli hit their peaks, which might be why it’s hard to remember, but it looked like that The Little Mermaid, The Lion King and Beauty and the Beast and the rest were going to be the legacy, stuff that Generation X and Y would remember and share with their kids. Then someone (probably John Lasseter) said “Hey, let’s try this Disney musical thing again,” followed by everybody promptly forgetting about The Princess and The Frog. I distinctly remember thinking “Oh well, I guess that’s that” after seeing that movie.

Then Tangled happened. Then Wreck-It Ralph. And now Frozen. The big trumpeting announcement that I want to make is ‘Disney is back!’, but that’s not exactly true. Some new company with the Disney name is here instead, but goddamn are they bringing some quality with them.

I am firmly over plot summaries in reviews, so I’ll keep this to a minimum: Elsa (Idina Menzel) and Anna (Kristen Bell) are sisters in fake-Norway, Elsa’s got snow powers, Elsa and Anna aren’t on great terms. Elsa does something kind of bad and Anna does her best to get Elsa to fix it. There’s a love interest (Santino Fontana) and a witty dude (Jonathan Groff) and an animal-that-is-essentially-a-dog (it’s a reindeer in this one) and a talking snowman (Josh Gad). 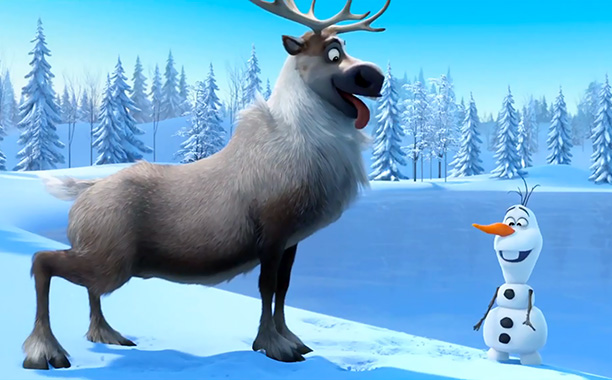 Here’s the thing about Frozen that I was nudging towards in my intro: it’s kind of not a Disney movie, at least as far as the 80s-90s musical output goes. This isn’t a bad thing, mostly. Let’s compare.

Disney musicals have a clearly defined and super-obvious villain: Jafar, Ursula, Gaston, even Mother Gothel from Tangled. Elsa isn’t a villain. She’s got her problems and causes the main issue in the plot, but there is a minimum of mustache-twirling villainy and her arc and characterisation are handled with the same deft hand and care that Anna is given.

Disney musicals are either about parents or lovers (or both): Beauty and the Beast and Aladdin are love stories, The Lion King is about living up to your Dad, Tangled is both. Frozen has a love story, but it’s about the sisters first and foremost, a more complicated dynamic altogether and one that Disney hasn’t really attempted before.

Disney musicals have really, really good songs, which always justify their inclusion in the film. Frozen…sigh, has okay songs (Let It Go is great, even though it is a huge Defying Gravity rip-off), but their quality doesn’t justify the amount that are in there. Also, Jonathan Groff barely sings, which makes his casting super weird.

Ignoring the song quality, which admittedly is kind of a bummer, these departures from the Disney standbys are welcome. The plotting and characterisation reaches the highs of the Disney classics, but the originality that Frozen brings elevates it even further. The Elsa-Anna relationship is an intriguing and three-dimensional one and the dynamic drew me into the film in that same way the classics did when I was a kid. Even more exciting, there is an honest-to-God blindsiding twist, something I never thought I’d see in a Disney movie.

What else is there to say? It’s gorgeous and creative, a wonderful evolution from Tangled’s CGI emulation of the 90s hand-drawn style, the performances are typically strong, it has some great slap-stick and some really clever set-pieces…The thing to take away here is that Frozen brings something new and different to classic Disney quality. For me, it’s a top five Disney movie. If the songs were a little better it’d be in the top two, right next to Beauty and the Beast.

Frozen’s a must-see, and it heralds a new era of quality Disney film that I thought we’d never see. If I were you, I’d make it your Boxing Day movie. I might make it mine, and I’ve already seen the thing.