"Misunderstanding has been a staple of comedy for centuries."

"The chemistry between the leads and the fun pace that Daley and Goldstein establish help keep Game Night lively. "

Misunderstanding has been a staple of comedy for centuries. Shakespeare’s A Comedy of Errors and The Taming of the Shrew revelled in the comedic potential of mistaken identity. In cinema, as far back as the silent era, misunderstanding played a large role in the films of artists like Charlie Chaplin, among others. John Francis Daley and Jonathan M. Goldstein are certainly no Shakespeare or Chaplin, who are arguably the two greatest figures in their respective lines of work, but Daley and Goldstein’s new film, Game Night, continues the long tradition of comedic error. Unfortunately, it’s not very funny. Fortunately, that it’s not very funny doesn’t particularly matter.

Game Night wants to be entertaining and funny. That it largely succeeds in one of those objectives distinguishes it from many films with comparable intentions. Daley and Goldstein, who were responsible for the dishearteningly bleak Vacation reboot back in 2015, have struck, perhaps inadvertently considering their prior resume, upon a fun pace and a congenial chemistry between their stars. Game Night may not be particularly funny, but it diverts amusingly. You’re unlikely to remember it long after you’ve watched it but hopefully Game Night won’t cause you the sort of anguish that a lot of recent American comedies have managed to induced. 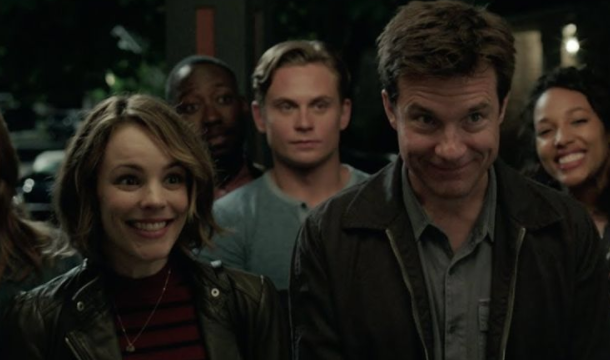 You may remember the 1997 Bill Murray comedy, The Man Who Knew Too Little. The title was a play on two separate Alfred Hitchcock films of the same name (1934 and 1956), but otherwise bore little similarity to either. Murray’s film follows a man who believes that he is involved in a roaming theatre act when in reality he has unwittingly become embroiled in a real spy drama. Game Night borrows liberally from this premise, which is a good one but not executed to its full potential in either film.

Annie (Rachel McAdams) and Max (Jason Bateman) are overly competitive game enthusiasts. They meet at a trivia night that Max is pretending to get drunk as to gain the upper hand over his opponents. They bond over their mutual love of domestic competitive entertainment. Max even proposes during a round of charades. They host a weekly gaming night and invite their best friends, Michelle (Kylie Bunbury), Kevin (Lamorne Morris) and the dimwitted Ryan (Billy Magnussen), the last of whom always loses the games because he brings dates who look better than they think. Left out is Annie and Max’s unsettling neighbour Gary (Jesse Plemons, continuing to prove himself one of the best part of most of the projects he takes on), who would like nothing more than to be included.

Max’s brother Brooks (Kyle Chandler) arrives in town. He’s better looking, richer and more charming than Max, and decides that the next game night will be held at his rented mansion. It’s a murder mystery game, Brooks announces, and it will be a game night like unlike any other. But then Brooks is kidnapped, and the rest of the gang, thinking it’s all part of his organised fun, set out to rescue him.

I laughed seldom during Game Night, a film that is ostensibly a comedy, but I smiled constantly and was rarely anything but entertained. The chemistry between the leads and the fun pace that Daley and Goldstein establish help keep  Game Night lively. It’s not uncommon to hear actors or directors discuss the role that chance plays in chemistry, which is why duos like Jack Lemmon and Walter Matthau or Lauren Bacall and Humphrey Bogart returned to work with one another over and over again. That I’ve mentioned, Shakespeare, Chaplin, Hitchcock, Lemmon, Matthau, Bacall and Bogart in this review for Game Night is possibly misleading. It is not an especially good film, but it is certainly an easy one.