"If the tired rehashing of themes and effects weren’t enough to signal the low quality of Geostorm, then the presence of the ultimate hack among action stars, Gerard Butler, certainly should be."

Dean Devlin is a name that should be familiar to anyone who came of age with the first wave (pun sort of intended) of Roland Emmerich disaster movies in the 1990s. Devlin was to Emmerich as Jerry Bruckheimer was to Michael Bay: the producer who was credited with half of the “creative vision,” if it is reasonable to call it that, behind those movies. It may surprise some to know that Devlin has not actually directed a feature film before – but then again, neither did Bruckheimer.

That has now changed, as Devlin has taken everything he learned from Emmerich and has made a close facsimile of a half-dozen Emmerich disaster movies in Geostorm, the ludicrous new blockbuster about the world being destroyed by out-of-control weather satellites. Except he has not taken quite everything from Emmerich, as even at his worst, Emmerich found a way to introduce an outsized performance or some welcome bit of camp that made the movie just a bit more eccentric. Devlin has instead given us something that’s as limp and by-the-numbers as these films get. 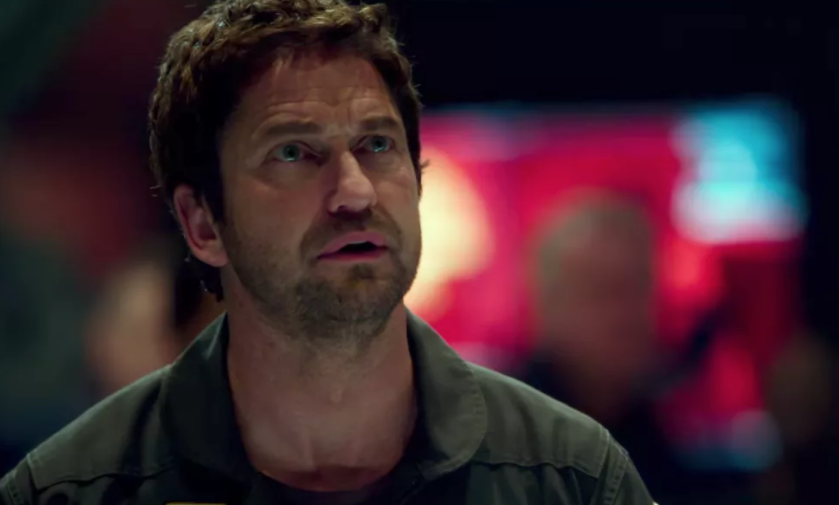 Emmerich has actually sort of already made Geostorm. Adverse weather, the type that doesn’t show up in the parts of the world where we’d expect it, has already been the subject of Emmerich’s film The Day After Tomorrow, and to a lesser extent, his film 2012. The excuse that allegedly gave this one the critical mass to be worth making? “Well, we’ve never destroyed Dubai with a wave before.” Now they have.

If the tired rehashing of themes and effects weren’t enough to signal the low quality of Geostorm, then the presence of the ultimate hack among action stars, Gerard Butler, certainly should be. Butler plays Jake Lawson, a guy who designed a massive network of weather satellites, which send “weather bombs” (or something) down to hurricanes and blizzards when they get particularly uppity. Butler doesn’t seem like he has a scientific bone in his body, but our aeronautical prodigies must also have the ability to live in oceanside trailers when they become outcasts, and Butler fits the bill. 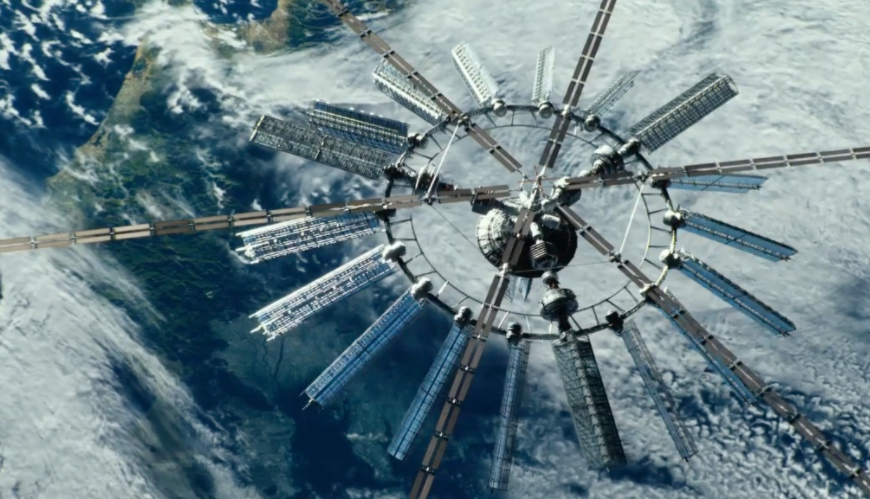 His satellite network, nicknamed Dutch Boy, has been successfully whipping that naughty weather into shape for several years, so eventually there’s a movement to turn the American-born invention over to international control. It’s at this point that a saboteur begins commandeering its programming and flash-freezing villages in the Afghan desert, a proof that Dutch Boy has software and hardware malfunctions that need rectifying before a handover can occur. Unfortunately, if too many weather satellites start launching their payloads at the same time, they bring the planet to the brink of what the movie calls a geostorm – a weather event so all-encompassing that it threatens all life on the planet.

The one way Geostorm deviates from a dozen other films Devlin has produced is that the cast is relatively small. Ordinarily we would expect to follow at least four different makeshift family units and a gaggle of cute children and dogs, but most of this film’s characters are offshoots of Jake’s own family. There’s his younger brother (Jim Sturgess), who assumed control of the Dutch Boy project after Jake was ousted. There’s the brother’s secret service girlfriend (Abbie Cornish), who fulfils half the film’s quotient of badass women (the other being the chief science officer of the International Space Station, played by Alexandra Maria Lara).

There’s Jake’s daughter (Talitha Bateman), who is curiously sidelined for most of the movie and strangely does not factor into a dramatic climax in which she is almost sucked into a tornado. There is of course, also, the president of the United States (Andy Garcia) and his secretary of state (Ed Harris). Then there’s a crew of space nerds who were picked precisely because they could represent every conceivable remaining cultural or racial demographic, ostensibly so the film can give a tip of the hat to utopian ideals, but really just to sell this movie to audiences in every corner of the world.

If the scenes of destruction – which is why we watch a movie like Geostorm – at least felt fresh, we might be getting somewhere. But the only trick we haven’t seen before is these scientifically dubious weather anomalies in which the air becomes cold enough to instantly freeze people where they stand. If watching Brazilians turn into statues of ice as they scamper off a Rio beach meets your threshold for the price of admission, then go for your life. 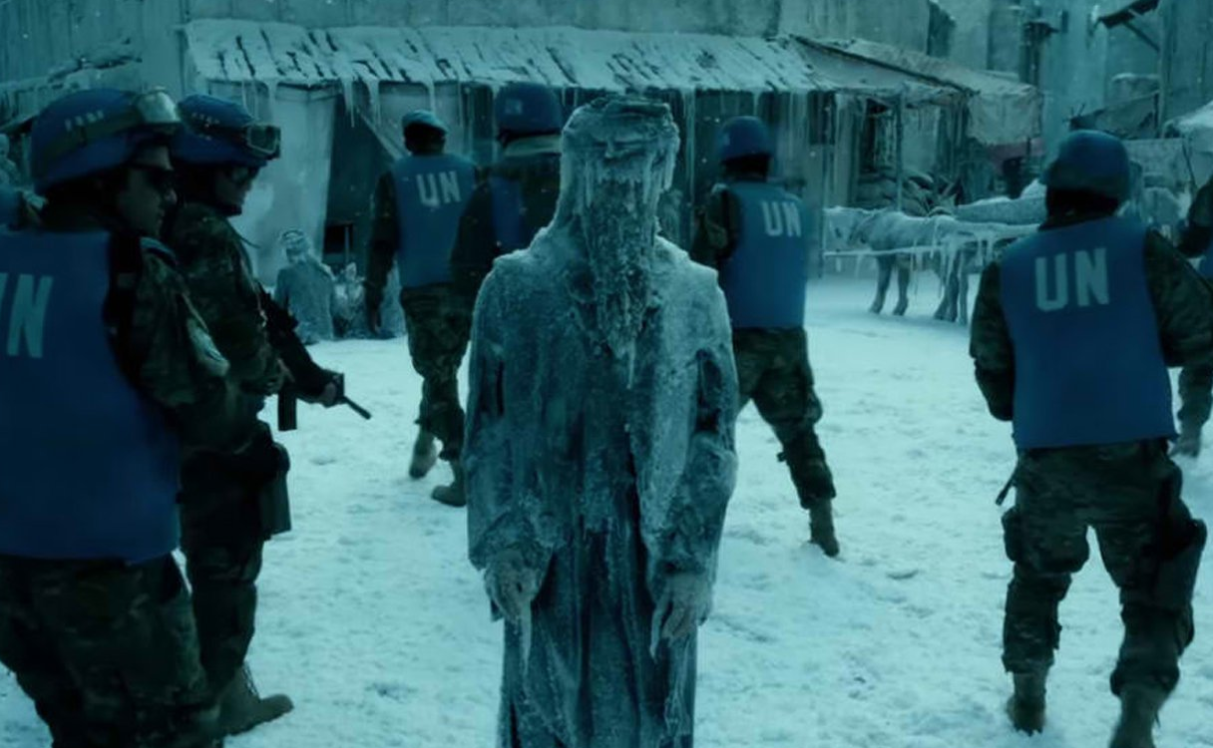 The expository dialogue in this film is particularly painful. Experts explaining how things work to each other, when they would all already know how these things work, has rarely been this clumsy. The emotional arcs between characters, designed to underpin the pyrotechnics with sentiment, are executed with about the same level of finesse. Which is to say, none.

That Devlin does a reasonably credible Emmerich impression is probably impressive on some level, though you could also say that it’s dispiriting to learn the roles of director and producer would be so easily interchangeable. But we need Geostorm like we need a hole in our heads – or a hole in our windscreens from a massive piece of hail. Even disaster movie enthusiasts will find it something of a disaster.