In 1991 Jeff Buckley was a young, session musician working in California when he was asked him to perform in a tribute concert to his late father in Brooklyn, New York. Within this small narrative focus, Greetings From Tim Buckley blossoms into an engaging and haunting story about the bond between father and son, or lack thereof, in the lives of two very different and very famous musicians. Where many other music biopics seek to follow a musician’s meteoric rise and fall, from birth to death, Daniel Algrant’s Greeting From Tim Buckley narrows its focus to develop a more detailed understanding of singer, songwriter Jeff Buckley.

As a wistful snapshot, rather than a fully-fledged biography, the film’s specific context is able to provide an interesting window into an already well-known story, and provides an entry for both new and established Buckley fans alike. Abandoned by his father from birth, Jeff is at odds with the man so many adored. Having died of an accidental drug overdose at 28, Tim Buckley was an absent figure in Jeff’s life; the pair would only meet on a few occasions. However in Greetings From Tim Buckley, Jeff is forced to confront the man who was never there, but whose presence would go onto haunt him throughout his career.

With Algrant at the helm the film is shot with an almost documentary-style distance, ensuring each scene feels organic and genuine and each character unscripted and improvised. Rehearsal footage and scenes of idle chitchat amongst band members support the more poignant and emotional moments, as they generate as sense of casual realism. The film’s musical performances are captured with similar accurate practicalities; shot from offstage and amongst the crowd, and cut together as if they were live concert footage from a touring band.

The 1960s flashbacks however feel a little more contrived. In a rather clunky attempt to connect the young Jeff with his late, great father, Algrant intersperses the film with various flashbacks to Tim’s early days on the road. But by the film’s end it feels like an altogether, unnecessary act, and it would have perhaps served the narrative better to leave Tim as an omnipresent, yet unseen force in Jeff’s life. 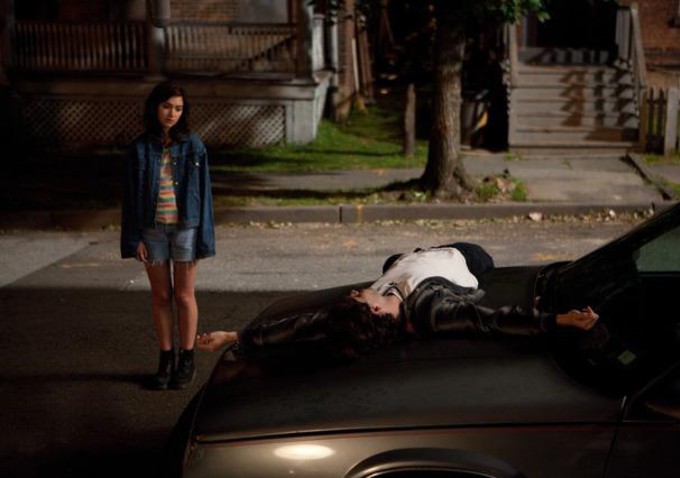 Ultimately, the real strength of the story lies within the unexpected talents of Penn Badgley. Best known as Gossip Girl’s “Lonely Boy” Dan Humphrey, Badgley’s previous big screen efforts have been relatively simple roles in the likes of Easy A and Margin Call. Undoubtedly the portrayal of such a well-loved, popular identity – like that of Jeff Buckley – would seemingly prove a great risk for Badgley, (and expose him to the wicked critiques of Buckley diehards worldwide) but he more than seizes the opportunity at hand.

Coming from a CW teen series I expected he’d nail any longing gazes or smoldering glances the narrative would require, but I did not expect such emotional depth and that rousing set of pipes. All the film’s musical numbers were performed live on set, no lip-synching involved – and Badgley matches Buckley’s poignant falsetto pitch for pitch. His voice haunts you just as Jeff’s did, his range stretches just as wide as Jeff’s did, and he’ll make you cry, just as Jeff did.

But this is far more than mere mimicry and Badgley’s portrayal only expands on the legend rather than compounds it. Despite being locked into only depicting a small window of Buckley’s short life, Badgley’s rendering is able to provide viewers with more than a measly glimpse. Buckley has seemingly made himself at home under Badgley’s skin, as Penn exudes the singer’s unique charisma and magnetism. And Buckley’s well-documented quirky sense of humour is thankfully not forgotten; an extended scene at a New York record store where Jeff impersonates rock legends of the past is an absolute delight to watch.

Badgley is well-supported by rising-star Imogen Poots who is gentle and tender as Allie, the tag-along intern who floats around New York with the troubled Jeff. While Broadway theatre veteran, Norbet Leo Butz is similarly understated as concert organiser, Hal Wilner. A smattering of actors and real life musicians, including British alt-pop songstress Kate Nash, come together as the tribute performers, providing some interesting reinterpretations of Tim Buckley’s classic folk songs.

The impending tribute concert provides the film’s climax, and sees Jeff quietly announce himself and his style to the world at large. Three years later Jeff would release his first and only full-length album, Grace, to widespread critical and commercial success. Only another three years later his body would be found in the Mississippi River; an accidental drowning after an impromptu night swim. Greetings From Tim Buckley marks the first in a slew of upcoming Buckley biopics, the next, Mystery White Boy staring American singer-songwriter, Reeve Carney is due to begin pre-production shortly. It will be interesting to see how others may interpret Buckley’s tragic life, and whether a broader focus may serve his story better.

So, while The Wolverine charges onto our screens this week and the violent, action of Kick Ass 2 opens next; here is a film of nuance and subtlety. It is a lingering portrait of a brief life, handled deftly by an indie director who understands the phrase, ‘less is more.’ Furthermore, without a true ‘leading man’ edge Greetings From Tim Buckley announces Penn Badgley as a former small screen actor and future big screen star with some exciting work to come.