"There may not be a single development in Hustle that you won't see coming. "

"This is a well-made film, with good performances, even and perhaps especially from the many NBA players who pop up."

All inspirational sports movies are the same. The sports may differ, the players may differ, the stakes may differ. But in the end, you’ve got the purest incarnation of screenwriting’s foundational three-act structure, with the character or team starting down and out, then making demonstrable progress toward the desired outcome, then hitting a snag that leaves them at their lowest moment, then finally achieving that goal. Ho hum. People like them so they keep making them. 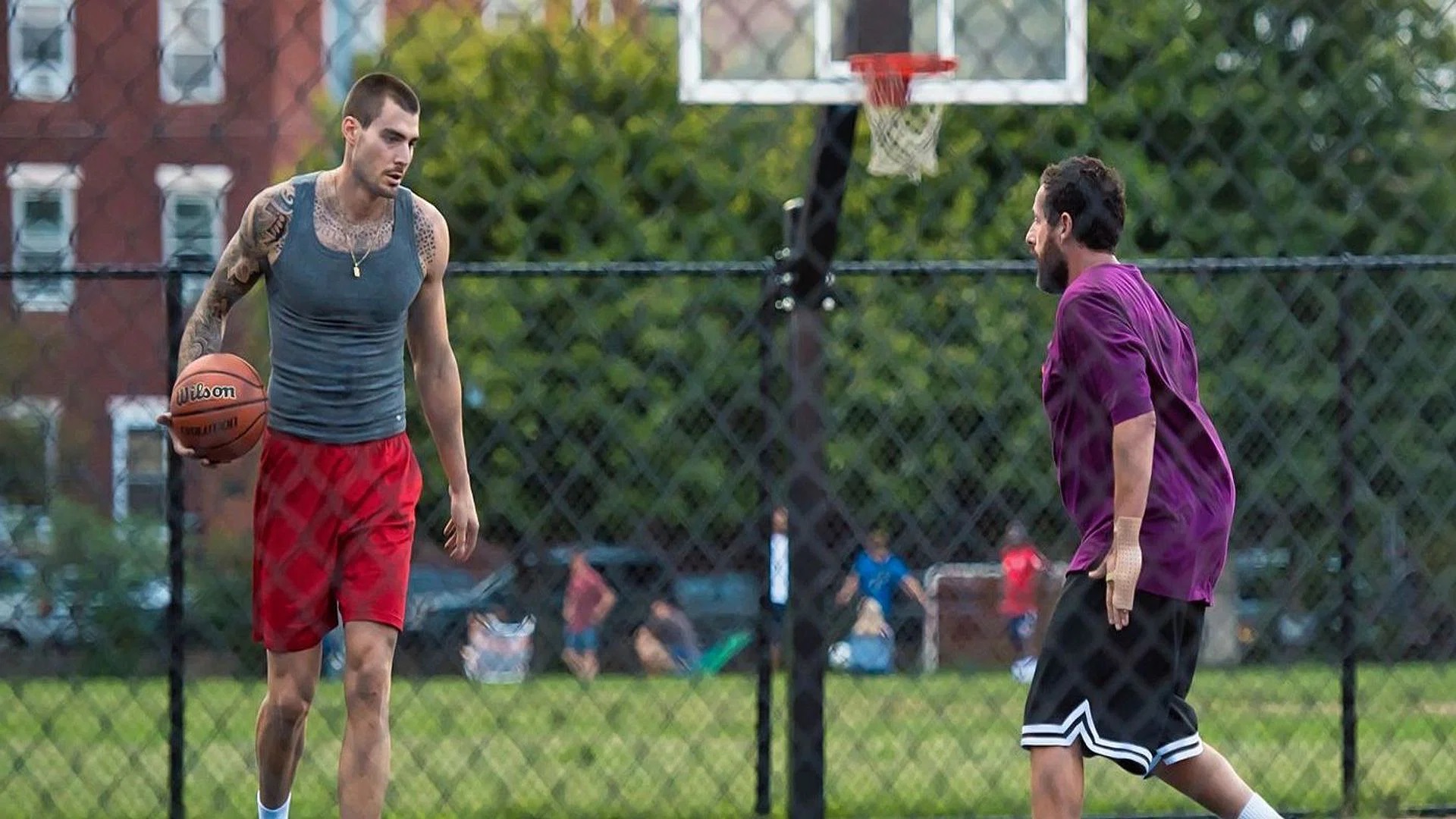 This doesn’t mean that all inspirational sports movies are bad, and the ones that aren’t escape that fate via memorable ingredients. In deciding to make one of his serious movies – even though it’s under the banner of his production company, Happy Madison, and is debuting on Netflix – Adam Sandler is one such potential ingredient. The last role for which Sandler received widespread acclaim, Uncut Gems, also featured basketball’s Boston Celtics, currently in the NBA Finals, though it was not a proper sports movie. The team with the most airtime in Hustle is the Celtics’ Atlantic Division rivals, the Philadelphia 76ers, but this sure is a proper sports movie – even with Sandler doing whatever he can to set it apart.

Sandler plays alliteratively named Stanley Sugarman, a successful university point guard whose chance at a professional career was derailed by a hand injury sustained in a car accident. That was 30 years ago, and Stanley has been biding his time as an advanced scout for the 76ers, hoping to make the step up to coaching. He’s on the cusp of that promotion – not replacing, but somewhere on the bench next to Sixers coach Doc Rivers – when the team’s owner dies, leaving its future in the hands of his pissant son (Ben Foster), whose permanent Kangol cap accoutrement is meant to signify that he’s an asshole. Which he is.

Rather than find a new line of work altogether, Stanley grudgingly goes back out on the scouting beat and discovers a rough but gifted Spaniard named Bo Cruz (real NBA player Juancho Hernangomez). The seven-footer can shoot, he can block, he can even pass reasonably well – but he also has a chequered legal history that has so far prevented any opportunity for wider discovery in the basketball world.

Stanley makes Bo his project, having received vague promises of that coaching promotion if he brings the new owner “the next big thing” – though it may strain the finances of him and his wife (Queen Latifah) to the breaking point just to put Bo up in a fancy Philly hotel, where Bo insists on eating everything in the mini bar. Actually eating these things wouldn’t be a problem, because he’d stop after one or two – but since he’s a would-be professional athlete with a body to maintain, he buys the whole $40 steak just to sample one bite, then moves on to the next item on the menu.

There may not be a single development in Jeremiah Zagar‘s film that you won’t see coming. Stanley and Bo will wrestle with their demons, they’ll fall flat on their faces right at the moment they need to shine, they’ll fend off the smirks of Foster’s smarmy owner, who unaccountably wants them to fail, as every movie villain should do. They’ll continue to fail right until pulling an 11th hour success out of their hat. And because this is 2022, it’s also easy to predict that Bo’s ultimate success will hinge on going viral on social media. Perhaps that’s the only way this musty formula has been updated in the past 40 years.

Hustle also has that problem staging its basketball scenes shared by almost every basketball movie. Every made shot is a swish or a dunk, every block is the platonic ideal of defensive perfection, where Hernangomez gets his whole palm around the basketball in flight and swats it in the opposite direction, making nary the slightest body contact. No sport looks less like the real sport on film than basketball. 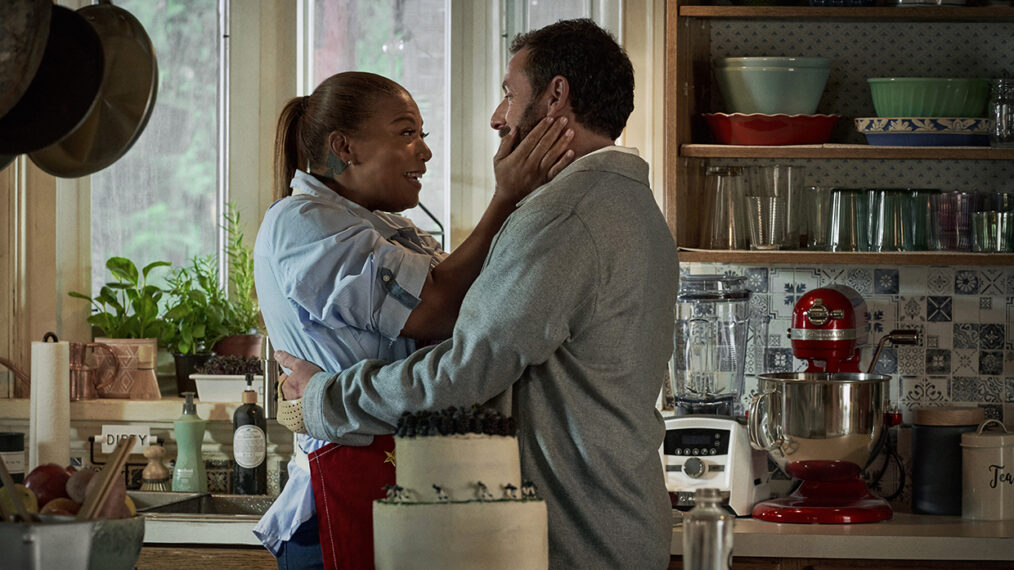 Why then, after two solid paragraphs of disparaging and nitpicking this movie, will the remainder of this review be a sturdy recommendation? For one, you can’t just write off sports movies as a genre. Secondly, it really is nitpicking. This is a well-made film, with good performances, even and perhaps especially from the many NBA players who pop up. Hernangomez was likely chosen more for his sculpted physicality and real basketball skills than because he’s going to contend for any acting awards, but he gives us a real portrait here. He’s capable of the emotions required of him, and he can be endearing enough to keep us pulling for him.

Then of course Sandler exudes natural ability every time he chooses to play a role that doesn’t require him to cross his eyes and do goofy voices. Those roles may put the food on his table, but these are the roles that clearly nourish him. The contours of the role are not particularly demanding, but Sandler brings the grizzle in giving us a real sense of a man whose dreams have been deferred so long that he’s almost forgotten them. He’s got more skin in the game than just the promotion, as this is sort of a chance to live a life he never got to live himself. 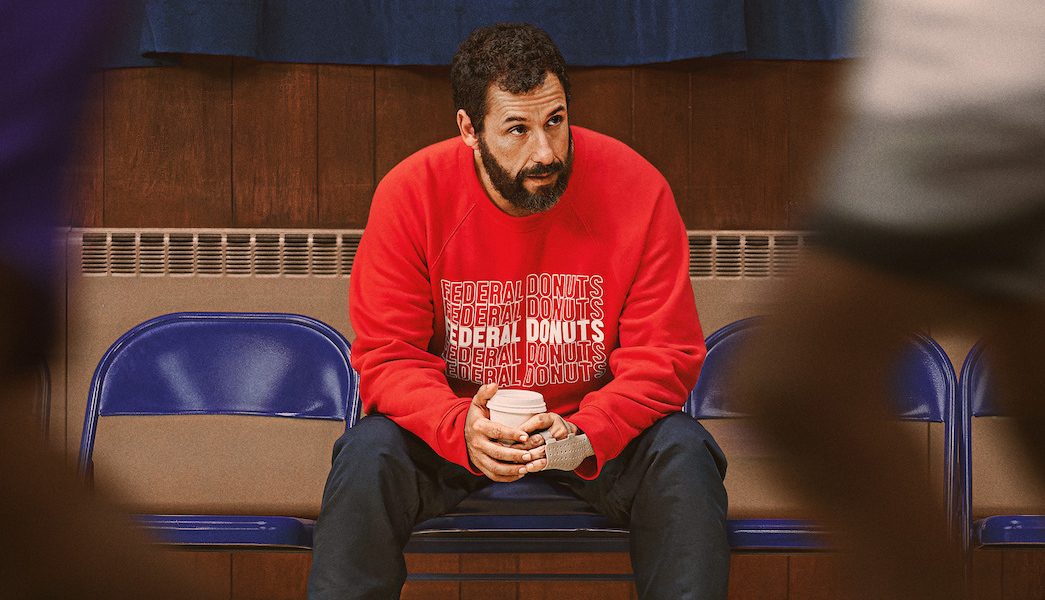 We love these sorts of movies because they satisfy deferred and unrealised dreams for all of us, and because we all want to smack that Kangol cap off the head of the person in our life who is smirking at us and wanting us to fail. Hustle doesn’t rewrite any playbooks, but it’s a far better way for Sandler to spend his time than crossed eyes and goofy voices – which makes it a good use of our time as well.

Hustle is currently streaming on Netflix.