"The fact that Waititi is so likeable could make his new film, Jojo Rabbit, more problematic than it already is. "

"It's quite a trick Waititi pulls off with the tone of this movie, which has its most clear embodiment in his own portrayal. "

The comedic persona of Taika Waititi is one of the most delightful to emerge over the past decade. Our most extended exposure to it was as the vampire Viago in What We Do in the Shadows, when he was the most kind-hearted and straight-faced of a crew of undead living together in a house in Wellington. His understated naivete was what made him so funny. Waititi’s Kiwi charms were then translated to the masses in Thor: Ragnarok, as his clipped deliveries and jovial loyalty made the rock creature Korg one of the standouts in a film full of good characters. He reprised the role in Avengers: Endgame. He hasn’t yet played a real jerk, though the dad character in Boy probably came the closest.

The fact that Waititi is so likeable could make his new film, Jojo Rabbit, more problematic than it already is. Here he brings his distinct sense of humour to the role of Adolf Hitler, a man who has been a figure of fun in the cinematic past (The Great Dictator, The Producers, Looks Who’s Back) but never a child’s imaginary friend. And never played by someone you want to hug as much as you want to hug Waititi. 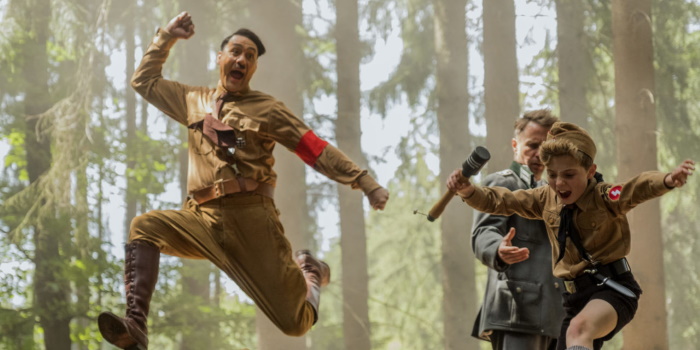 It ends up being just one of the deceptive strengths of Rabbit, which seemed like it was designed as nothing more than an eccentric palette cleanser after Ragnarok, not to mention an implicit promise he wasn’t selling out to Hollywood. Not only is the movie more serious-minded and socially significant than such a palette cleanser might ordinarily be, but Waititi’s portrayal of Hitler, while mostly comedic, leaves no doubt about the man’s historically reprehensible nature. Only by being such a huggable performer can Waititi so effectively undercut that persona when the time comes. Jojo Rabbit consistently surprises in this manner.

It’s the story of a conflicted ten-year-old boy (Roman Griffin Davis) who thinks he wants to be a shining example of Hitler youth in the waning years of World War II. He doesn’t know he’s conflicted, but learns it when he’s invited to demonstrate his killer instinct by snapping the neck of an innocent rabbit. Unable to do the deed, young Johannes instead earns the nickname “Jojo Rabbit” for his apparent cowardice. As an attempt to correct his peers’ impression of him, he dives headlong into a grenade drill and ends up with shrapnel in his face and leg.

There to console him are his best friend (Archie Yates), his mother (Scarlett Johansson) and none other than Adolf Hitler himself. Der Fuhrer appears as an imaginary friend who offers him what seems to be well-meaning advice, bringing a more sympathetic perspective than one would generally attribute to such a mass murderer.

One of the issues on which Hitler advises him is the Jewish teenager he’s found in his attic, whom his mother has been harbouring. Elsa (Thomasin McKenzie) doesn’t adhere to the wild stories he’s been fed about Jews – she doesn’t have horns nor sleep hanging from the ceiling like a bat – but she does fulfil the adversarial role he imagines her to have. That’s because Elsa doesn’t know if she can trust Jojo the way she can trust his mother, and her discovery could lead any of them to hang in the town square like the others doing what they can to rebel against the Third Reich. 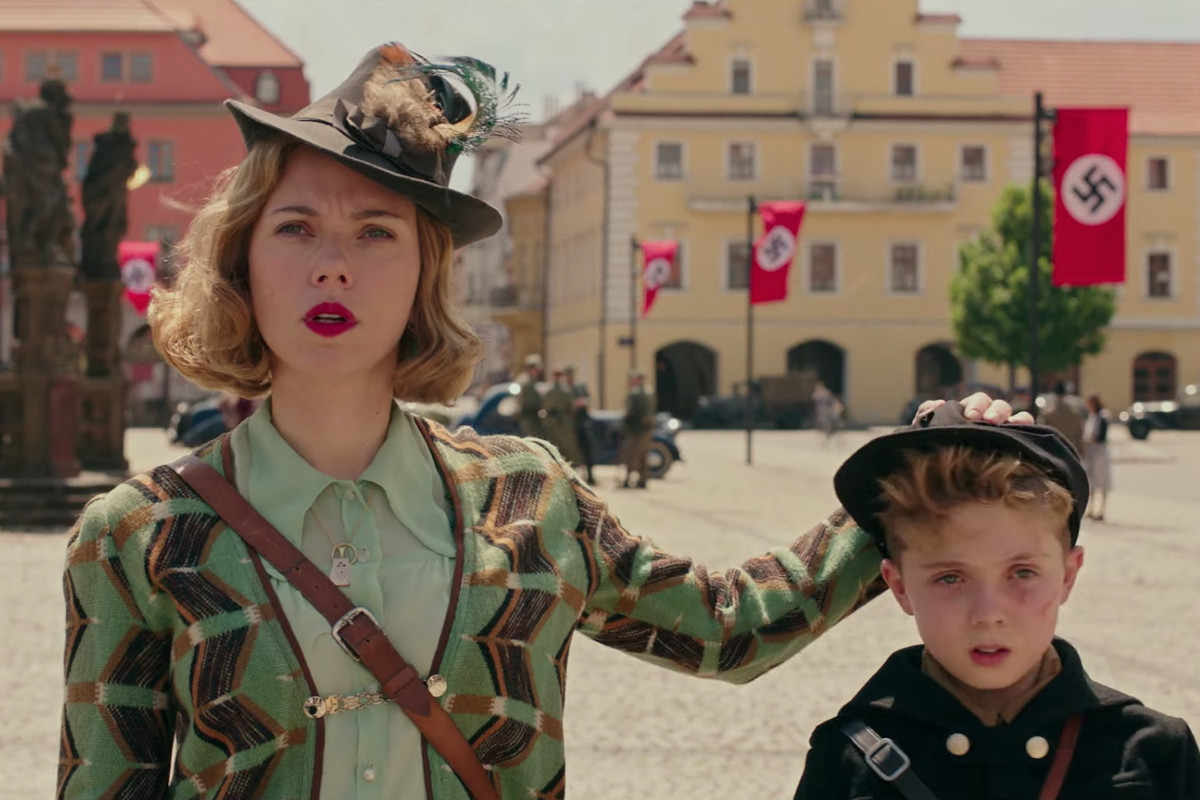 It’s quite a trick Waititi pulls off with the tone of this movie, which has its most clear embodiment in his own portrayal. His Hitler is a total gas. He interacts with Jojo not unlike Mister Rogers might, seeming to genuinely comfort him when he’s sad, or pump him up when he’s doubting himself. Because it’s Hitler, there’s a great cognitive dissonance here that repeatedly disarms us and makes us laugh. Unlike Mister Rogers, though, this Hitler doesn’t always stay positive. When Jojo asks if his scars have made him ugly, Hitler simply says “Yes,” his face communicating a “hey, I gotta be honest” shrugging quality. He’s a clown with an impish physicality that tickles the funny bone.

This quality is reflected in the movie on the whole. There’s a certain Wes Anderson aspect to the opening scenes, as the camera regularly pans to the find the humour in the shot before panning back to the original subject. The Hitler youth even seem a bit like the boy scouts in Moonrise Kingdom, led by Sam Rockwell with only one working eye (rather than Edward Norton), doubting his own ongoing commitment to the party after years of increasing disillusionment. It won’t surprise you to know that Rockwell is also hilarious, particularly in his relationship with his assistant, played by Game of Thrones’ Alfie Allen. The very absurdity of what the party is teaching its youth makes it funny in spite of the disturbing ideology at its core. 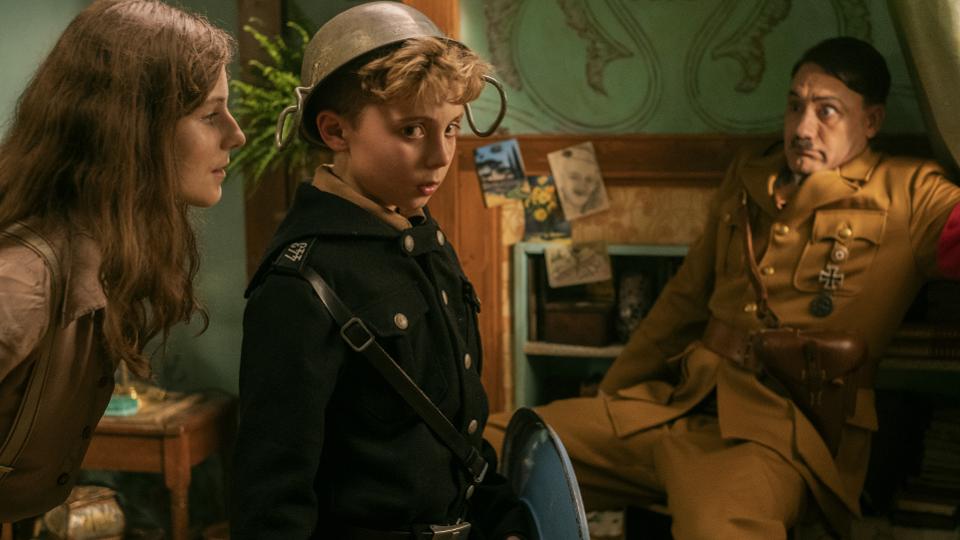 Where Waititi shines as writer and director is by delivering serious sentiment without ever toppling over into self-righteousness. Some artists would be creatively crippled by needing to prove at every turn that they don’t make light of this subject matter, but Waititi credits his audience with knowing there’s no other defensible attitude toward the atrocities committed by Nazis. Waititi himself understands that perfectly well, as he used to be known as Taika Cohen, a nod to his own Jewish heritage. So the moments he chooses to remind us that none of this is actually funny have more power for their relative scarcity. And he does that also by showing Hitler’s monstrous side emerge, even in Jojo’s own imagination of him as he starts to doubt he’s worshipping the right heroes.

Perhaps the film’s best and most representative performance comes from Johansson as Jojo’s mother. She’s a bit of a firecracker – she has this habit of winking and making a noise like a camera shutter snapping – who obviously loves and enjoys life. But she’s walking a tightrope by hiding a Jewish teenager, not only from the party, but from her own son, who she’s worried could either be caught up as a conspirator, or inform on her himself. Her schizophrenic life takes on literal form in a scene where she does a bit of play-acting for Jojo, taking on the roles of both herself and her absent husband, and demonstrating the strain she is doing her best to subdue. 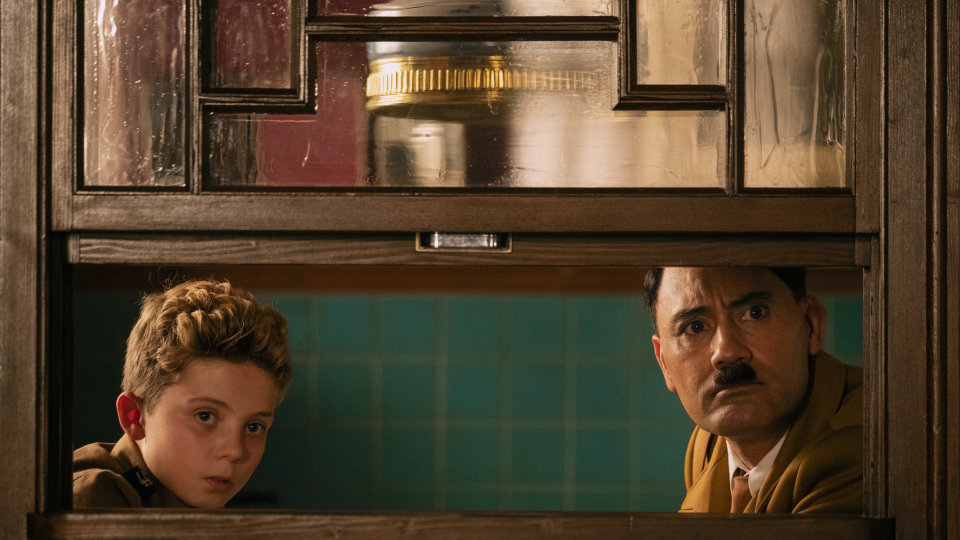 No discussion of the best performances of the film could be complete without spending time on its youngest performers. Davis and Yates are both revelations as the young kids, Davis impressing for his earnestness and Yates for a comic timing that defies his years. It’s McKenzie, though, who really slays with her portrayal of Elsa. Her survival instincts prevent her from freely showing the world anything less than her toughest face, but as she gradually befriends Jojo, we see other sides to her shrewdness. The craft of acting seems to come easily for this talented 19-year-old, and she’s the soul of this movie, as demonstrated in a face that runs the gamut of possible human emotion.

Naysayers might not have expected a “comedy about Hitler” to have any soul at all, but we should all learn to stop doubting Taika Waititi. He emerged from very local, very idiosyncratic comedic beginnings in New Zealand to make one of the most beloved entries in the Marvel Cinematic Universe. That he can deliver a World War II movie with a lot on its mind, not the least of which is making us laugh, should no longer surprise us.