"As hard it is to imagine a world where unstoppable carnivores multiplied beyond our ability to manage them, we should have realised this was never – could never be – the series’ endgame."

"Too quickly, Jurassic World: Dominion wants to get its characters back to the more familiar ground of just another fenced-in location they must escape with their lives."

The threat underpinning all previous Jurassic Park/World movies has been easy to summarise: “What if the dinosaurs escaped out into the world? What then?” To have this actually happen, though, has always been a bridge too far for the screenwriters, who felt more comfortable penning them within the constraints of a discrete location, most often an island. That’s because anything else was too apocalyptic to consider. 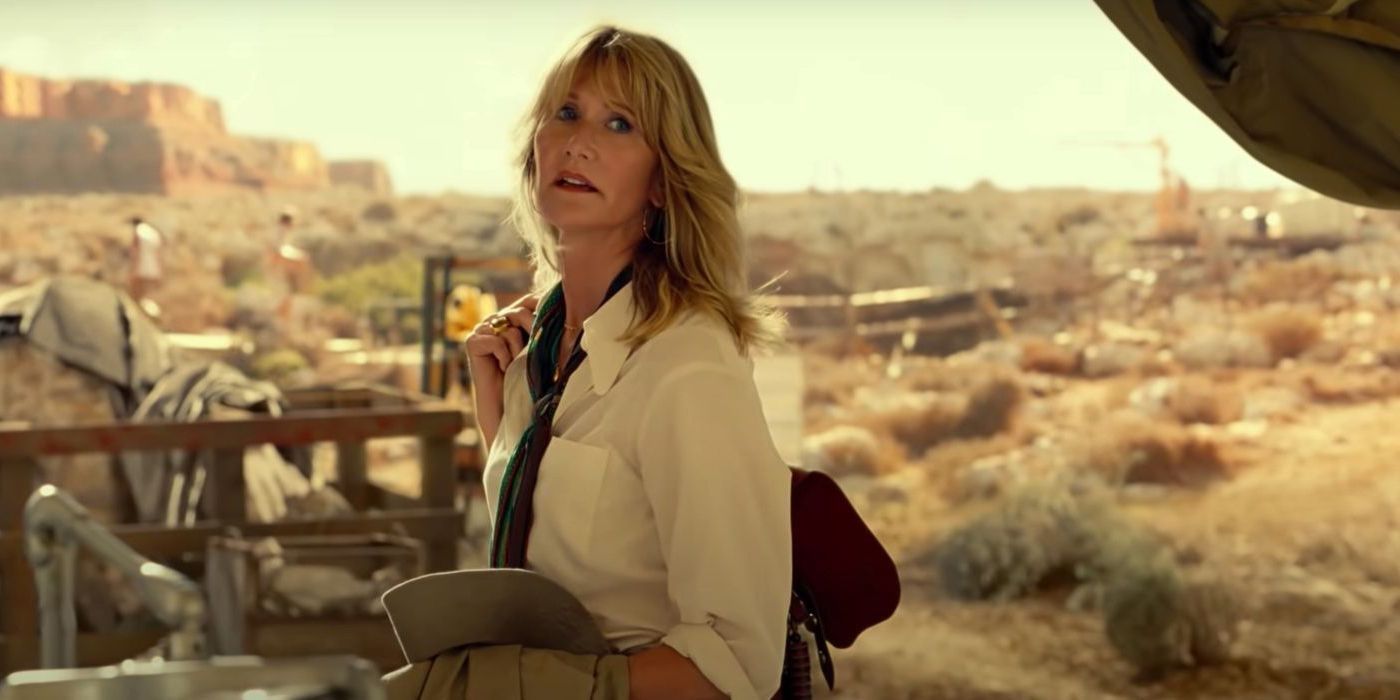 Yet the door to that apocalypse was opened at the end of the previous film, Jurassic World: Fallen Kingdom, when indeed, no last-ditch effort to restrict the range of these escaped behemoths was successful. We came to Jurassic World: Dominion – which has been billed as the final of the six movies – finally expecting to see what that apocalypse looked like.

Except in actually getting there, we should have realised it was our lot to be disappointed. As hard it is to imagine a world where unstoppable carnivores multiplied beyond our ability to manage them, we should have realised this was never – could never be – the series’ endgame. That’s because while humans may be the protagonists of these films, dinosaurs are not the antagonists. It’s other human beings who made the catastrophic decision to spawn a new age of dinosaurs from DNA frozen in amber, then turn a massive profit on them, so it’s these same humans who are going to be the villains of Jurassic World: Dominion. And while that’s the far more ecologically progressive choice, it feels far less apocalyptic, making this an inevitably anticlimactic way to end the six films that began in the minds of Steven Spielberg and Michael Crichton.

In fact, it’s not even dinosaurs that our human villains are monkeying around with this time. Rather strangely, it’s oversized locusts who strike the greatest concern as they swarm and decimate fields of crops, the sort of destruction that will lead to a worldwide collapse of the food chain. Who would want to wreak such havoc on the world? Why of course, an agricultural biotech company called BioSyn – “sin” being a part of their very name – who have the public face of trying to save and provide refuge for dinosaurs, as well as use their DNA to cure human diseases, but are secretly creating this scourge that will put all farmers out of business – unless those farmers have grown their crops with BioSyn’s seed, which the locusts won’t go near. Yes, six dinosaur movies have boiled down to yet another go at Monsanto, the real-world company whose genetically modified organisms have vastly redrawn the real-world agricultural landscape.

We do get to see the dinosaurs at play in that same real world, or this film’s version of it anyway, when we see a fishing vessel losing its catch to the mammoth mosasaurus we first met in Jurassic World, or a gentle herbivore who gets turned around in a snowy mountain pass and has to be helped out by men on trucks with flares. Then of course there are poachers and illegal breeders and all sorts of others capitalising on dinosaurs in ways they should not be. This encompasses about the first 20 minutes of the film and makes for a thoughtful consideration of what would become of these dinosaurs, the majority of whom are benign, if they were turned loose in a world that was not made for them, and what responsibilities humans would have for caring for them. 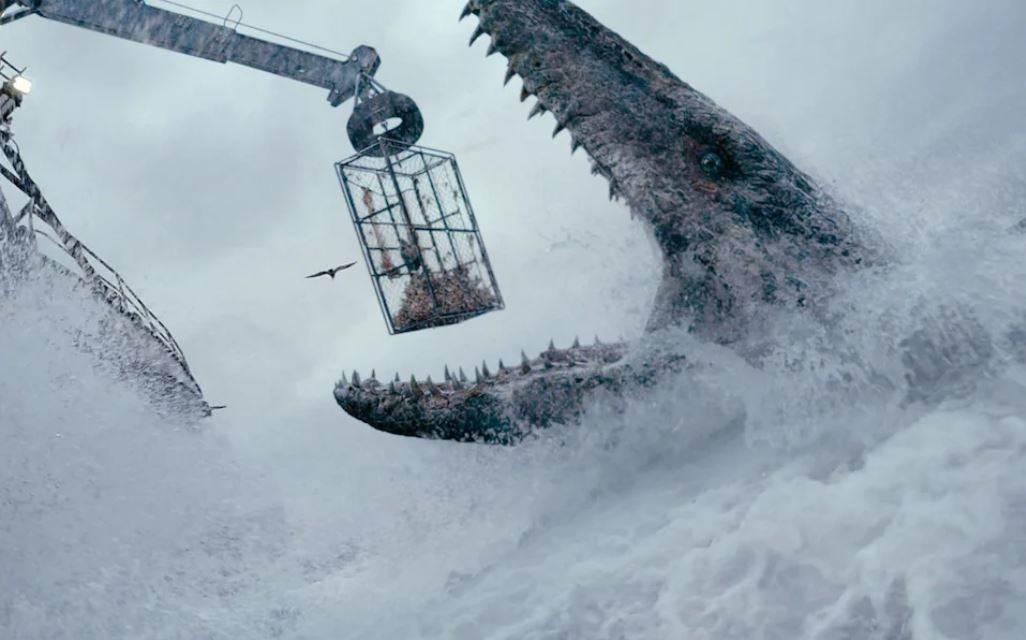 Too quickly, though, Jurassic World: Dominion wants to get its characters back to the more familiar ground of just another fenced-in location they must escape with their lives. That’s BioSyn’s headquarters/dinosaur sanctuary in the Dolomite mountains in Italy, where the characters from both Jurassic trilogies will soon find themselves. Ian Malcolm (Jeff Goldblum) is already working as an advisor to BioSyn’s corrupt CEO Lewis Dodgson (Campbell Scott), though he’s trying to take the company down from the inside. He’ll have old pals Ellie Sattler (Laura Dern) and Alan Grant (Sam Neill) there to help him when their research of the overgrown locusts leads them to BioGyn’s doorstep. Plus our Jurassic World heroes, Owen Grady (Chris Pratt) and Claire Dearing (Bryce Dallas Howard), will also find themselves here, having followed the cloned child they have been protecting, Maisie (Isabella Sermon), whom BioSyn has kidnapped because her unique DNA is the final key to their latest master plot to take over the world.

The path to getting here is anything but straightforward. You know that scene in every James Bond movie, particularly those starring Daniel Craig, where Bond runs along the rooftops in a European city, chasing or being chased by an adversary? There’s that scene in this movie, only it involves Claire and dinosaurs. That gets at a bit of this film’s confusion about what sort of movie it wants to be, as indeed, there are times when it feels more like a spy movie and less like the grand final entry in a stalwart movie franchise. The momentary pleasures of scenes like this, which also include a Bond-style motorcycle chase with Owen on the motorcycle, are quickly overcome by the sense of how little they belong in the grand scheme of things. 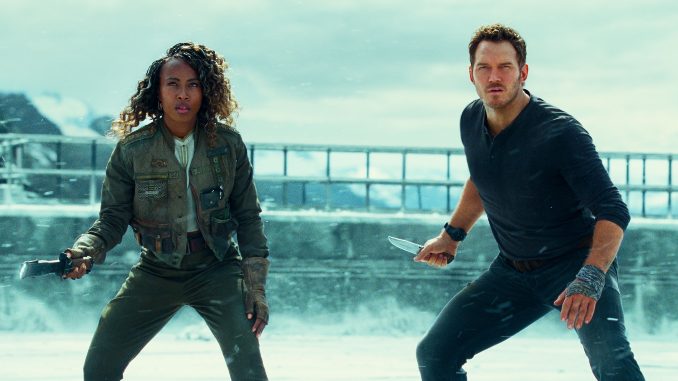 Colin Trevorrow, who directed the first Jurassic World, was once supposed to have directed Star Wars Episode IX, before it became the J.J. Abrams-directed The Rise of Skywalker. That’s curious because there’s something about this that resembles Rise of Skywalker, both in feeling like a course correction to the previous film, and in its insistence on gathering all our beloved characters together at the same time, as if reassembling a splintered family. The climax of this film has any number of shots that include all the characters we have come to know in one frame, adding only the refreshing new character of pilot Kayla Watts (DeWanda Wise). It’s almost as though the blocking of having them all together there at the end was more important than any plot logic to what was going on, especially strange given that some of these characters had never even met. 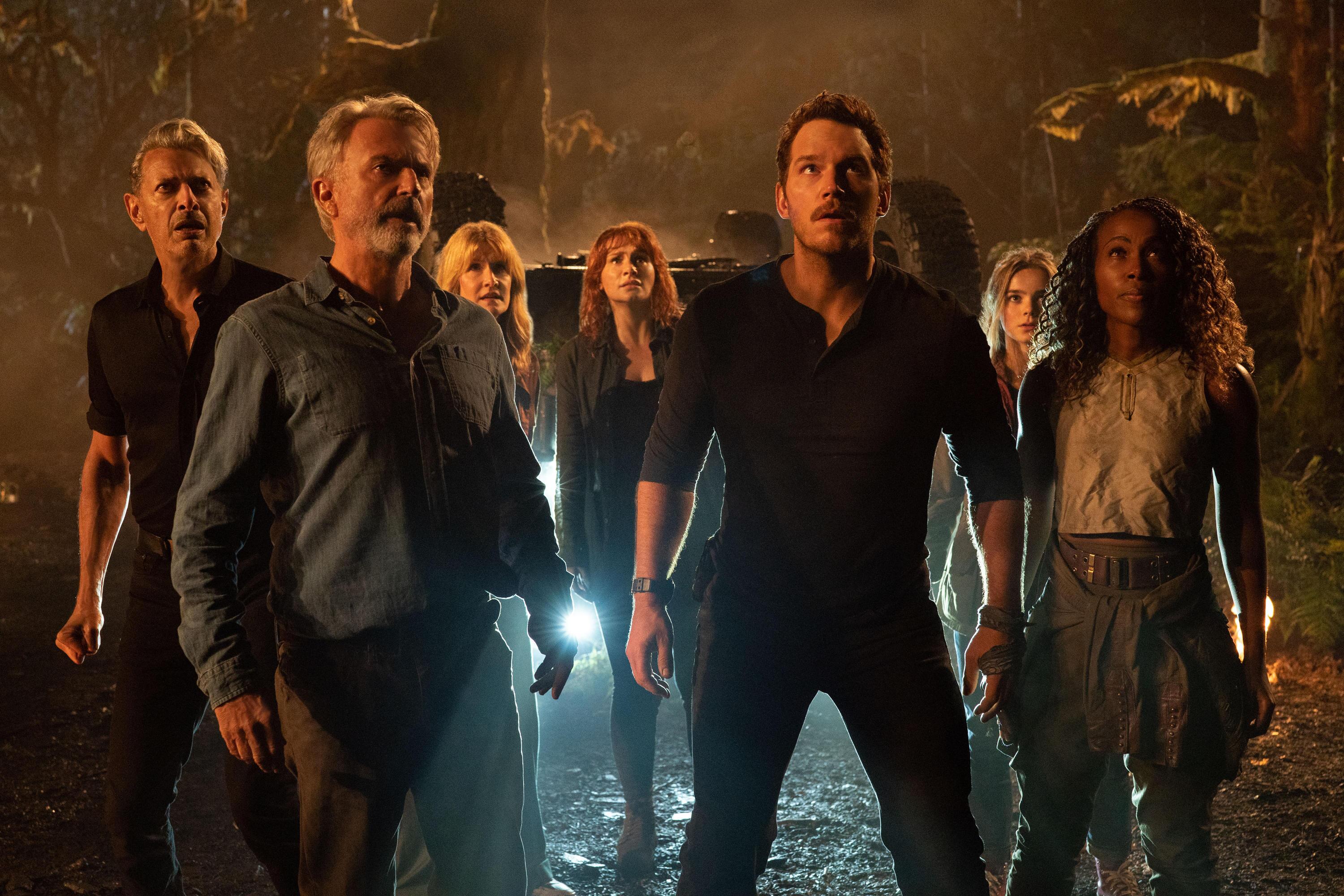 Having them together at the end of what, though? Given how little Dominion actually does to distinguish itself from the other movies, and feel like a proper ending at all, it’s debatable whether we should even consider this the resolution to the series. And that may be the most disappointing thing about the film. We’ve already alluded to two other “final” films in this review, if you consider both The Rise of Skywalker and the recent Bond “finale” No Time to Die. Whatever their strengths and weaknesses, those films at least felt like endings. In hedging its bets and keeping things open, Universal has left us sensing we may have to endure any number of other sub-par episodes, instances of humans with too much hubris evading dinosaurs with too little space to roam.