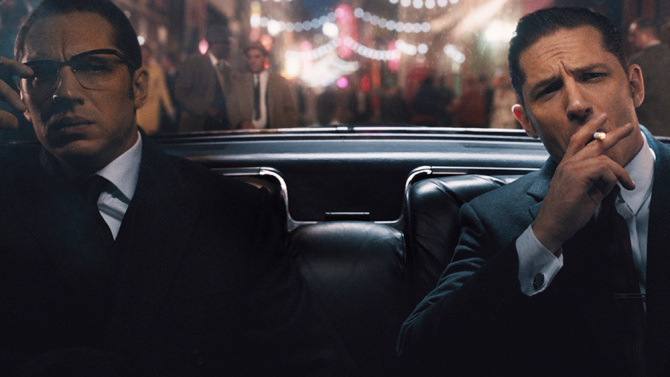 If you’re the kind of geezer who enjoys watching other geezers beat the living piss out of each other, then Legend is definitely the film for you. Fortunately, it’s also got rather more to offer. The new biopic of the legendary Kray brothers, written and directed by American filmmaker Brian Helgeland, is yet another great vehicle for Tom Hardy to show off his superior range. Hardy plays the fearsome Kray brothers – yes, both of them – who reputedly ran the East London crime racket throughout the 1950s and 60s. Reggie Kray is the suave and debonair entrepreneur of the two, keeping business ticking along, running the nightclubs, and keeping the ‘fuzz’ from spoiling the party. Ronnie Kray is his psychiatrically maligned twin-brother, whose preferences are psychotic violence, firearms and young boys. Accordingly, the film’s main point of suspense is making us guess just when and how Ronnie – the obligatory Cockney nutjob of this particular English crime film – will bring their empire to ruin. The ensuing chaos is violent, reprehensible, and of course, deeply amusing.

Punctuating the mayhem is the relationship between Reggie and local Bethnal Green sweetheart and long-suffering wife, Frances Shea (Emily Browning). Shea, initially seduced by the power and charisma of Reggie, gradually realizes the costs of being a kept woman in the London underworld. Her deteriorating relationship with a frequently preoccupied Reggie lead to a gradual realization that the Kray’s glamourous and decadent world is powered by violence and exploitation. Much like Kay Adams in The Godfather or Karen Hill in Goodfellas, Frances is the moral lens through which we view our protagonist’s inevitable downward spiral. What comes up must come down. The moral: crime doesn’t pay. It’s predictable storytelling, but it gets the job done. 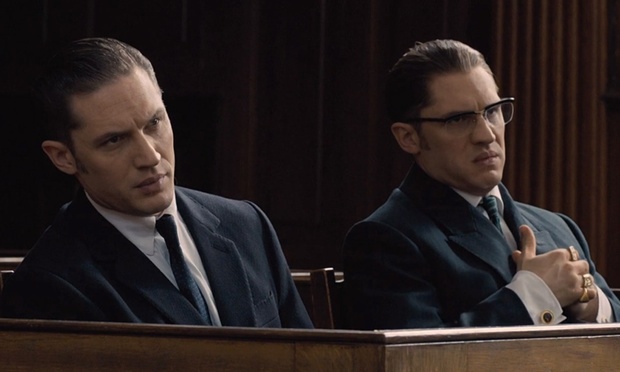 In fact, if there’s anything to say about Legend, it’s that the film is a bit of a workhorse. It’s stylishly shot by Dick Pope (actual name), with 60s East London presented in dazzling, colourful panoramas. The acting is distinguished – especially Hardy, who imbues each Kray brother with distinctive flourishes and peculiar menace. David Thewlis, as the Kray’s long-suffering accountant, and Chazz Palminteri, as the Philadelphian mobster who can’t come to terms with Ronnie’s homosexuality, also provide stirring support. The violence is satisfying without ever being gratuitous. There’s a lot to recommend.

And yet, without the frenetic energy of a Lock, Stock style-caper, or the sobering reactionism of the more recent Harry Brown, Legend does feel a little bit lost. Perhaps telling such a quintessentially English tale required a dab English hand. At any rate, the story of the Kray’s is first-rate subject material. The film only touches upon their history as professional boxers, and their dishonourable discharge from the army, or even their appearances on television in the 60s with major Hollywood stars. Arguably, Ronnie and Reggie are as indelibly woven into the volatile fabric of East London as are the riots in Hackney in 2011; such that they represent a brilliant revolutionary counterculture to the areas ongoing gentrification in the last few decades. For a London enthusiast like myself, Helgeland’s Legend is worth seeing for the period it depicts alone, a 1960s Bethnal Green when you couldn’t order a café latte or live in a renovated studio apartment.

PS: Legend isn’t the first film about the Kray Brothers. Actually, Gary and Martin Kemp of new-wave band Spandau Ballet actually starred as the infamous duo in 1990s film The Krays. I haven’t seen it – but it looks pretty, pretty good.