"If The Lego Ninjago Movie were our first introduction to a Lego movie, it might not have been the huge hit that The Lego Movie was..."

The Lego Batman Movie demonstrated that the Lego company couldn’t pass up an obvious chance for a sequel/spinoff. Six months later, The Lego Ninjago Movie prepares us not only for an enduring franchise, but possibly even an extended cinematic universe. It also marks the moment when the toy company leaves the comparative safety of one of the world’s most recognisable characters and goes world building. While the first two movies tapped into the nostalgia of parents while also pleasing their kids, this third has the unenviable task of selling its characters and stories to a whole swath of the viewing public that wasn’t weaned on them. The task proves to be both unenviable, and ultimately, impossible.

“Ninjago” is of course a portmanteau of Ninja and Lego, and it describes both a themed series of Lego sets, and, in the context of this movie, the land in which their adventures take place. A modern-day city set on an Asian-inflected harbour, Ninjago is protected by a series of masked ninjas, who are known by the colours of their outfits and are plucky high school students by day. 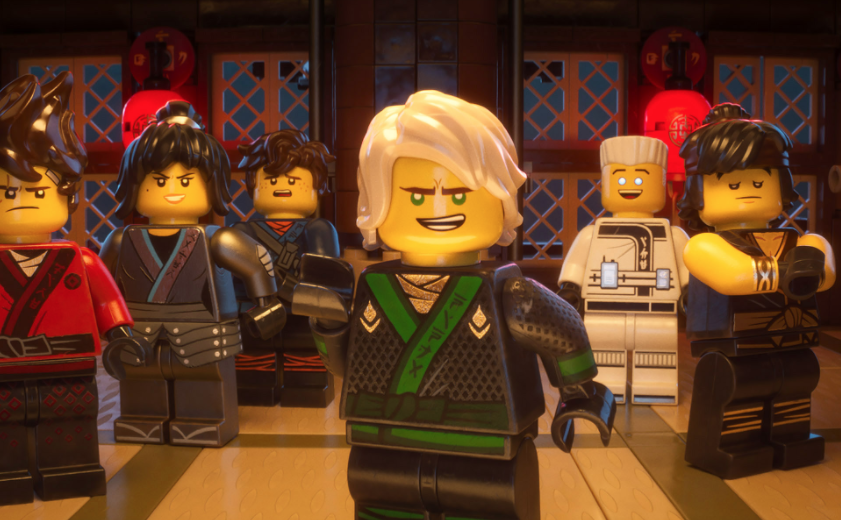 Their most consistent threat is a would-be despot named Lord Garmadon, who continues devising new plans to attack and take over the city from his offshore volcano lair. Garmadon’s son, Lloyd, is the green ninja, though his status as the offspring of the supervillain earns him the constant cold shoulder from his classmates. The ninjas use complicated mech suits to ward off their rival, who himself builds bigger and better robots and machines to execute his conquering agenda. Meanwhile, Lloyd just wants a father figure, even if that father figure is an embodiment of evil bent on world domination.

The Lego Ninjago Movie may do no worse a job than its predecessors of establishing the contours of its characters and story, but it also proves how comparatively easy those films had it. The original Lego Movie was presenting mostly new characters, but its world was intuitive, based on simple ideas of conformity and rebellion within the physical restrictions of a world defined by interlocking toys. We were discovering that world, but also recognising it from our own countless hours of play, deriving humour from our understanding of the physical properties and limitations of the toys. 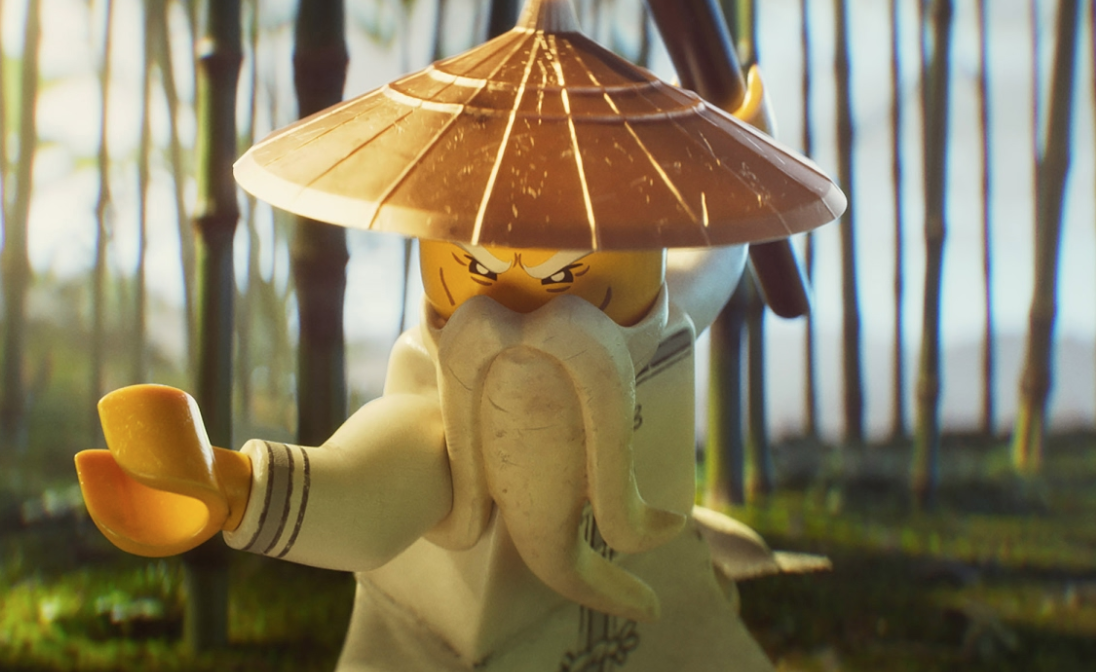 The Lego Batman Movie took what we’d learned about that world and combined it with what we already know about one of the most famous comic book characters of all time. The Lego Ninjago Movie, on the other hand, plunges into new territory with no safety net, making Legos less the subject of the story than a medium for telling it.

This is a problem unless you really connect with the Ninjago universe, which is no guarantee for anyone outside the subset of children already familiar with it. Perhaps aware that it could be a niche product, this movie has worked hard to duplicate the charms of its two predecessors, with familiar voice talent and the type of ironic humour that Phil Lord and Christopher Miller, the original Lego Movie writer-directors who have stayed on as producers, brought with them. But this feels like 20 percent new inspiration, 80 percent pale retread.

Lord Garmadon himself is the perfect example of these diminishing returns. As voiced by Justin Theroux, Garmadon is like a combination of Will Ferrell’s President Business and Will Arnett’s Batman, possessing the type of buffoonish machismo you’d want from a vainglorious supervillain who’s slowly and comically getting in touch with his own dormant paternal instincts. Father-son conflict is, of course, also a theme of the original Lego Movie. Theroux doesn’t make the role his own, meaning he can’t get out of Ferrell’s and Arnett’s shadows.

Jackie Chan voices a wise old spiritual type who serves a similar function to Morgan Freeman’s Vitruvius from The Lego Movie, only he’s not as funny as Freeman either, hampered both by lesser writing and by his own inadequate line deliveries. Speaker of lesser versions of things, Dave Franco, the lesser Franco brother, voices Lloyd, and does so with a kind of petulant whininess that does him no favours. Even the way Garmadon calls him “L-loyd,” pronouncing both L’s, is kind of a variation on the way President Business worshipped an ultimate weapon he called “the Kragle” (a container of Krazy Glue with a weathered label). 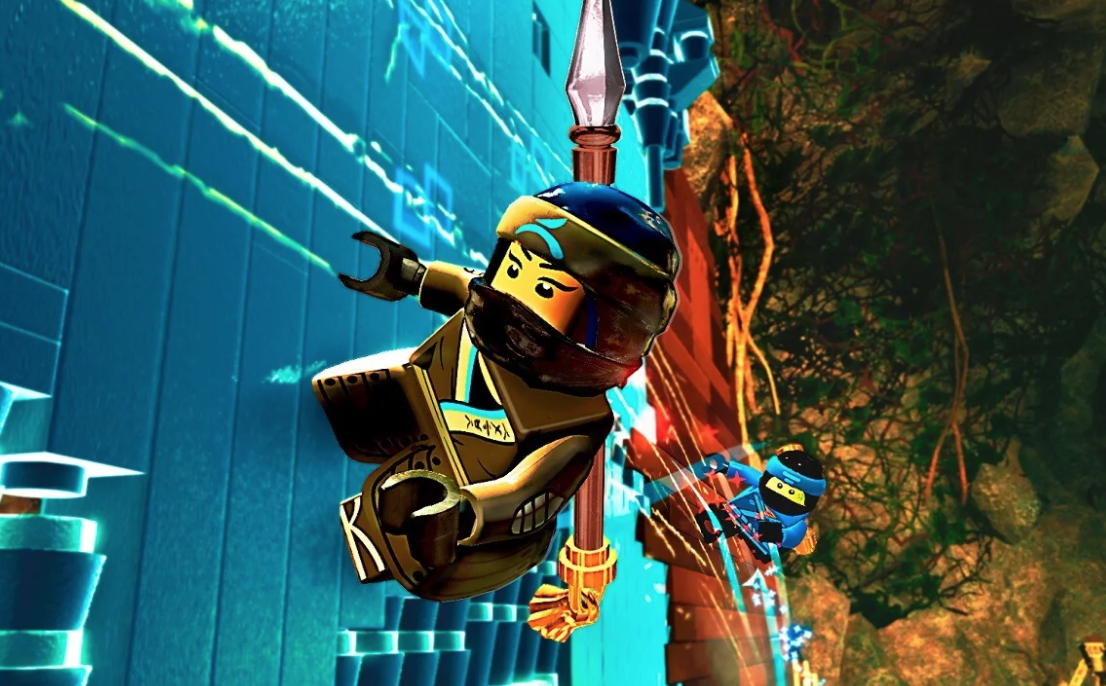 The movie has a difficult time getting off the ground, as its first act relies heavily on scenes of mechanical suits fighting within the towering buildings of a city, giving it all the visual coherence of your average Transformers movie. It does recover a bit when the action shifts to a quest within more traditional “ninja territory,” a forest of bamboo shoots and other more rustic settings. In its rush both to move things along and to drop in as much self-referential humour as possible, though, the movie short changes some very funny voice actors – among them Kumail Nanjiani, Zach Woods and Fred Armisen – whose characters are simply not getting developed. The movie may be trying to do too much, simply because it has too much it has to do. The result is that it fails to fully take flight.

If The Lego Ninjago Movie were our first introduction to a Lego movie, it might not have been the huge hit that The Lego Movie was, but at least it might have seemed like a fresh exposure to the possibilities of this world. As a third movie, and a bellwether of the possible success of future movies with inevitably narrower focus, it’s not nearly as promising.