"If that’s your child about to spend the rest of his or her life in prison, you have no idea what you might be capable of."

"The trouble with The Lie is that the decisions they make lack the exquisite cleverness of a tightly plotted thriller."

The Lie debuted at the Toronto International Film Festival in 2018, then wandered the wilderness for two years before landing as part of Jason Blum’s new deal with Amazon Prime, called Welcome to the Blumhouse. It’s easy to see why it didn’t find a home before now. The eventual eight-film series is supposed to explore “family and love as redemptive or destructive forces,” a theme that can easily be examined through the prism of Blum’s usual mode, horror. The Lie is basically not horror at all, and it feels like the series’ theme might have been reverse-engineered to include this family drama that doesn’t otherwise have a place among Blum’s body of work. 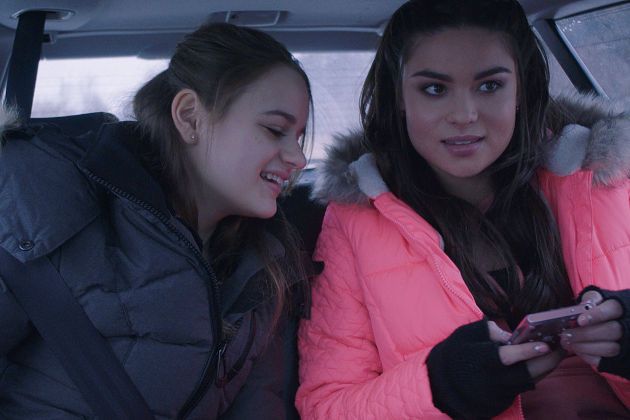 The story involves a terrible accident borne out of jealousy. Kayla (Joey King) is being driven to a ballet retreat by her father, Jay (Peter Sarsgaard), somewhere in the snowy hinterlands of greater New York state. On their way they see Kayla’s friend, Brittany (Devery Jacobs), waiting for a bus to the same event. They pick her up, but trouble brews right away when Brittany starts flirting with Jay, the lead singer of a band whose music is currently pulsing through the car.

Brittany says she needs to wee, so they stop by the side of the rode and she and Kayla flit off into the woods. When Jay goes in search of them, he hears a yell – and sees his daughter with her legs dangling over the side of a bridge over an icy brook. She’s distressed about something, and Jay quickly figures out what: Kayla pushed Brittany into the water. Now, only Brittany’s purse can be found.

Jay and Kayla flee the scene, and soon involve Kayla’s mother, Rebecca (Mireille Enos), in a cover-up of Brittany’s disappearance. She’s a high-powered lawyer and has been separated from Jay for some time. It isn’t long before Brittany’s father, Sam (Cas Anvar), turns up to try to find out what happened to his daughter. He doesn’t even know they picked her up from the bus stop, but as Brittany and Kayla are close friends, this was a logical place to start looking. Of course, Sam can tell straight away that something’s off when the shell-shocked family behaves anything but normally.

The Lie’s central focus is on something that should have ongoing value as a cinematic theme. Ordinary, law-abiding citizens who would never dream of covering up a crime suddenly find themselves able to do so, when the guilty party is their own child. You might think you’d go to the police in that situation, trusting the system to be lenient on a first-time offender who acted impulsively during an irrational moment, but you’d be kidding yourself. If that’s your child about to spend the rest of his or her life in prison, you have no idea what you might be capable of. 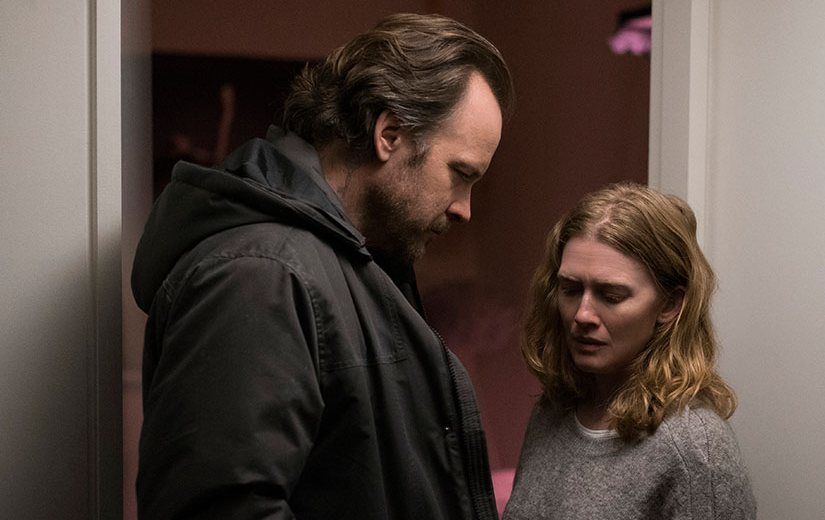 Veena Sud’s film, which she wrote and directed as a remake of the 2015 German film We Monsters, does tackle that subject reasonably well. We watch as Jay and Rebecca find themselves acting on instinct, as a necessary response to the need to act quickly, doing things they might later regret because they simply didn’t have time to think it through. And once they start to erect a façade, an alternate explanation, even a chain of evidence that might implicate Brittany’s own short-tempered father, they have no choice but to increasingly commit to it. Which also involves divorcing themselves from the stress of the moment and engaging in spontaneous, high-stakes improvisation.

The trouble with The Lie is that the decisions they make lack the exquisite cleverness of a tightly plotted thriller. The repercussions increase in severity, but they don’t possess their own sense of ironic, tragicomic or just tragic momentum. The banal details of the story are designed to leave more emphasis on the character relationships, which also come up short despite performances from the cast of varying success. Sarsgaard is always a top-notch talent, but Enos fixes herself in a mode of deer-in-the-headlights panic. She has this permanent expression of looking like she’s just sucked on a lemon, and it limits her effectiveness. 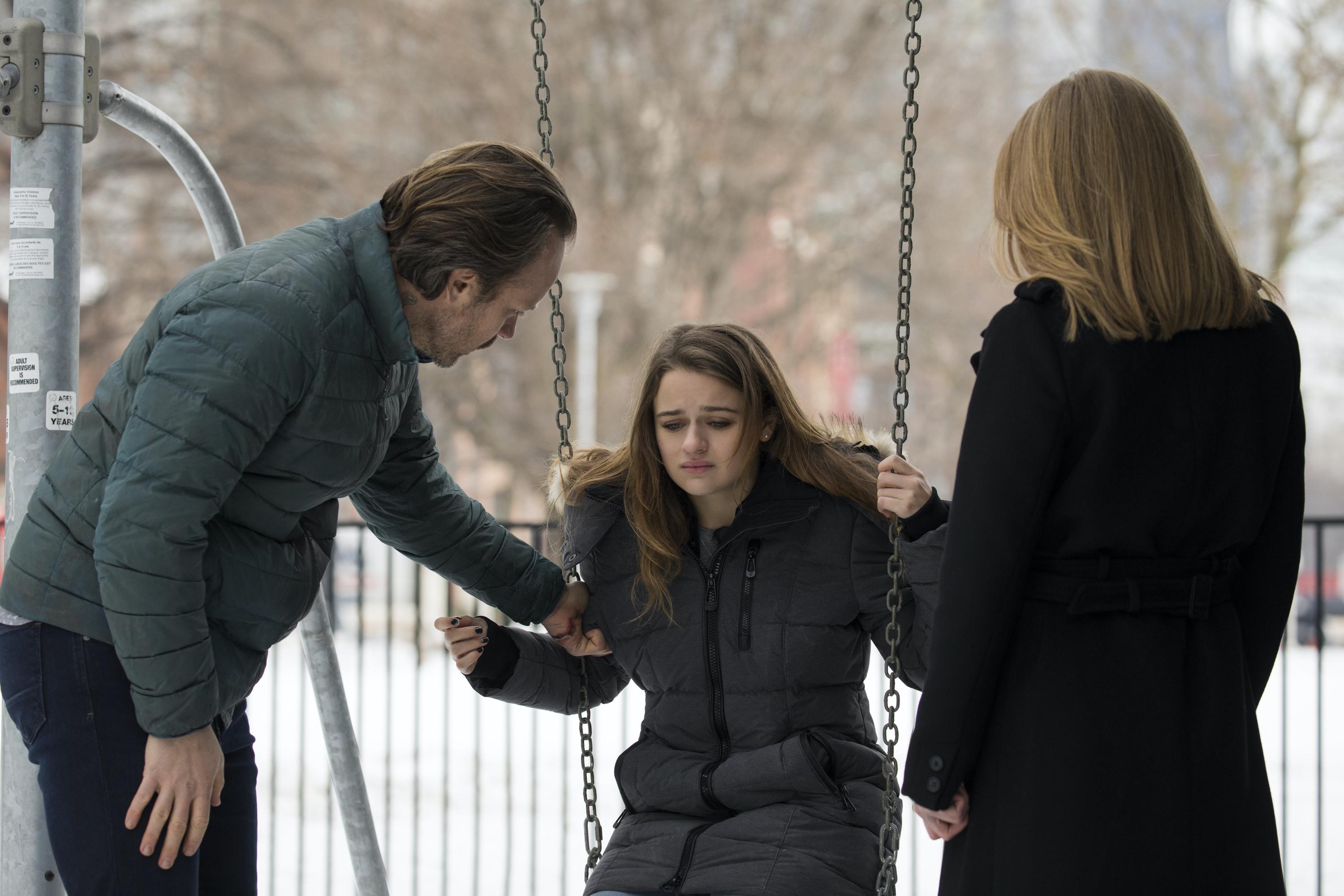 To say The Lie is without cleverness, though, is inaccurate. But it gets itself into even bigger trouble when it takes a big swing at something more unexpected. You have to kind of dance around talking about it if you don’t want to give too much away. Let’s just say that something happens toward the end of the film that calls into question the behaviour to this point of one key character. Though the impact of this event is, in itself, somewhat satisfying as a narrative development, it doesn’t stand up to a moment’s scrutiny in terms of the events that have preceded it.

The Lie is also deficient on a technical level. As much of it takes place around Rebecca’s house, it calls attention to the minuscule budget that is Blum’s MO. It’s smart to turn a big profit on movies that don’t cost very much, but the lack of resources shows up here where it often does not. In particular the sound recording is awful, frequently resulting in reverberations when characters suddenly raise their voices or reach a higher pitch.

There is exactly one scene constructed using horror tropes, when Brittany’s dad is trying to peek through the windows to find Kayla, who is hiding from him. This might work if we thought he was some kind of psycho hunting her down. Given that we already know he was framed for Brittany’s disappearance, it’s hard to see him as the type of menace the moment relies on him being.

Blum’s got two more movies coming out this month in the Welcome to the Blumhouse series, which seem to have been scheduled for October as the month of Halloween, when most horror movies find their most eager audience. If Evil Eye and Nocturne stick more to the horror side of the series’ focus on family, they won’t give lie to Blum’s strengths as The Lie has done.