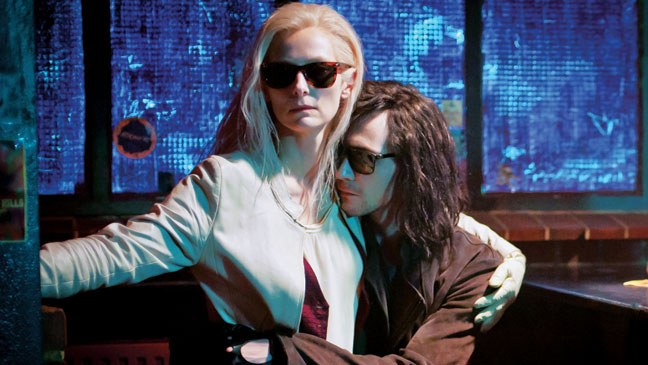 The latest offering from Jim Jarmusch promises much and has been highly anticipated. The director’s take on the vampire genre piqued my interest to say the very least, and with the cast on offer I, like so many, couldn’t wait to park myself in front of the big screen. But high expectations don’t always pay off. Only Lovers Left Alive often takes on a trance-like, hypnotic quality but it doesn’t necessarily follow that this will make the film engaging.

Tom Hiddleston plays the vampire Adam, a brilliant but reclusive musician who lives in Detroit. Tilda Swinton is Eve, his equally brilliant lover and also a vampire, who lives on the other side of the world. They’ve been married for centuries and things have changed throughout the years. They have to be far more careful about where they get their ‘food’ from now, with the diseases and drugs that are going around. Realising that Adam is feeling far more depressed than usual, Eve flies halfway around the world to join him. Their reunion is interrupted however, by the arrival of Eve’s sister, Ava (Mia Wasikowska).

I said the film wasn’t that engaging, but nowhere does the fault lie with the cast. The two leads are fantastic, and are eccentrically well matched. Hiddleston’s Adam is dark and moody, drifting through his life with a disdain for nearly everyone he meets. He could really bring down your mood, but he is offset by Swinton’s Eve. Eve has a positive attitude that far outweighs Adam’s dreary one, and there is an almost whimsical quality about her. She delights in the smallest things. Their relationship is darkly romantic, and the core of the story.

And that’s where the film started to lose me – I couldn’t find any more substance to it than that. The performances were great, and there are some great moments of dry humour. Aesthetically and aurally, the film is sensual and seductive – gorgeous colours, use of light and shadows, and the soundtrack, my god, let me own that soundtrack. But after the initial intrigue of Adam and Eve’s relationship, the film just idles. It takes a while before the disruptive presence of Mia Wasikowska’s Ava makes its appearance, and then things start moving again. Yet, I felt strangely detached from the whole experience. Maybe that was the point. Adam and Eve are so detached from the world around them – their world is each other – and maybe we aren’t supposed to be let in. Still, it doesn’t make for the most exhilarating of viewings.

As far as vampire films go, this isn’t quite a vampire film, and in that sense it more than impresses. It is unique.  Sure, they’re vampires (even though the actual word is never said as far as I can tell), and they only come out at night, and they drink blood, but Only Lovers Left Alive is very much a love story. It aims for mesmerising, but for me, it didn’t quite get there.