"Even when the more shocking elements of the plot take centre stage, they aren’t characterized by speechifying or physical confrontation..."

"Ruth Negga received an Oscar nomination for her portrayal, and it’s rare that such an internal performance has been so lauded."

Films told with restraint about restrained characters are not the types that grab you by the lapels. However, they can be deceptively effective ways to deliver stories of great social change, as is the case with Loving, Jeff Nichols’ second film within the past 12 months. While Nichols has focused primarily on films with genre associations among his half-dozen features, always giving us intimate studies of his characters, this time he’s taking on one of the landmark American court cases of the late 20th century, though it tends to be one that’s overlooked. That was the story of Richard and Mildred Loving, two simple people following the simple and highly attainable dream of marrying each other.

Except it’s not so simple or attainable in Virginia of 1958, in which the prevailing bigotry can be summarised by one ugly five-syllable word: “miscegenation.” Actually, that word in itself is not harmful – it describes, without judgement, the interbreeding of people of different races – but the word gained notoriety for the laws in Virginia (and many other states) that prevented it. As a white man (Joel Edgerton) and a black woman (Ruth Negga) who went to Washington D.C. to get married, before returning to their Caroline County home to live together, Richard and Mildred fell afoul of those laws, as well as any unenlightened Virginians who were only too eager to enforce it. They were jailed – he for a night, she for a whole weekend – upon a Friday night arrest designed to inflict maximum discomfort on them, then forced to leave the state as part of a suspended sentence for their “crime.” Never feeling at home in the big city of D.C., though, they continually fought to lawfully return to their rural Virginia birthplace, a quest that eventually involved the American Civil Liberties Union and the Supreme Court of the United States. 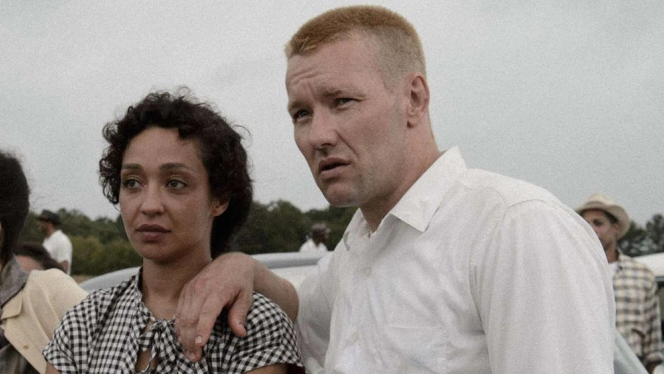 The film takes place at the same time and the same part of the country as another 2016 film, Hidden Figures, and deals with many of the same issues of racial segregation. In fact, at one point in Loving, Richard even watches one of the rocket launches the Hidden Figures mathematicians were probably working on. But Loving is the anti-Hidden Figures in almost every other respect. While that movie is big and demonstrative, this one lives in the small moments, and they’re all small moments. Even when the more shocking elements of the plot take centre stage, they aren’t characterized by speechifying or physical confrontation – in fact, a grabbed arm here or there is the most any characters in Loving become physical with one another.

Instead, the resentment over being legally denied their fundamental rights just simmers, and appears in episodes of quiet frustration and disbelief by the two leads. These were not civil rights crusaders, and even in the moments of greatest intensity, they were largely resigned to the impossibility of their own pursuits. They challenged their probation by sneaking around and trying to circumvent it, but when caught, they never ran. Dignity had no prouder example.

But eventually the ACLU got involved, and that’s when the Lovings had their chance to attain the aforementioned dream – one that began with Richard buying a plot of land he naively though he could build on to live with Mildred, openly and without repercussion. The representation of the lawyers from the ACLU, specifically comedian Nick Kroll, is the one possible place where the film makes a tonal misstep. Kind of a bro comic with a rascally streak, Kroll might seem an odd choice as the legal representation for these two quiet citizens. But the more Kroll is on screen, the more we realise there’s a kind of misdirection going on here. Kroll is unexpectedly carrying more than his share of this movie’s emotional catharsis, and his reaction to a particular climactic line of dialogue by Richard is perhaps the film’s most moving moment.

Kroll stands out in a film where not only are the protagonists low-key, but so are the antagonists. The personification of local law enforcement is Sheriff Brooks (Marton Csokas), a man whose face barely moves when he issues veiled and unveiled threats (“I’ll split your head open to the white meat”) and traffics in casual racial obscenity. Racism can actually be scarier when it is as soft-spoken and resolute as it is in the hands of Csokas. 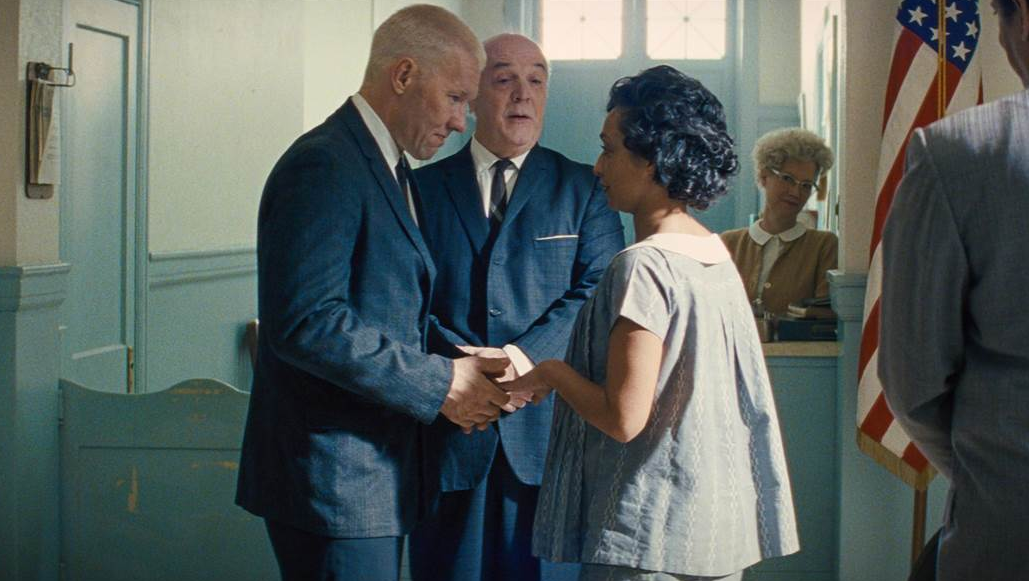 Resolve does also eventually come to characterise the Lovings, even as Richard initially resists anything that shines a light on their private lives. Mildred is no more demonstrative than her partner, but she recognises the opportunity that has been afforded them, the chance to pursue a basic right that she knows she should be entitled to even if she never righteously demands it. Ruth Negga received an Oscar nomination for her portrayal, and it’s rare that such an internal performance has been so lauded. But “internal” does not mean “underplayed” – Negga plays every development just right, leading to her own moments near the climax that will wobble the knees of the most stolid viewer. Fiery speeches may play in a movie like Hidden Figures, but not in the story that Nichols wants to tell – and tells incredibly well.