"Mank grinds through useless point after useless point, entirely missing crucial insight into what might have made Citizen Kane great."

"That David Fincher has made a boring film is unexpected considering the aptitude for engaging cinema he has hitherto well and truly demonstrated."

Mank, an onomatopoeic mess of a film largely based on a debunked Pauline Kael argument, is a good case against filial devotion. Is the motion picture business so dead in the water that one of our finest filmmakers might make such an unequivocal turkey about one of the finest films ever made? There’s no other way around it. Mank is a piece of crap, a turd in the otherwise bejewelled crown of David Fincher’s filmography.

Gary Oldman plays Herman J. Mankiewicz (or “Mank” as he prefers), a quick-witted screenwriter whose onetime friendship with newspaper tycoon William Randolph Hearst provided significant inspiration for Charles Foster Kane, the central figure in Orson Welles’ Citizen Kane. In the years leading up to his death, Mankiewicz would boast that he was solely responsible for the Kane screenplay despite sharing credit, and an Oscar (the only one the film would win), with Welles. That Mankiewicz wrote the first draft alone is true, an accuracy that the film depicts, and exploits.

Since it was released in 1941, Citizen Kane has gone on (after a slow start) to become regarded as one of the greatest films ever made. It is a movie that still magnetises today, even if its technical and formal innovations are rendered hidden to the modern observer. The creation, history and creative drive behind such a masterpiece could make for an insightfully engaging piece of cinema, which Mank thinks it is. It isn’t.

When is a movie about Citizen Kane actually about a 1934 gubernatorial election? Upton Sinclair’s loss to the Republican incumbent is true (and might have made for engaging stuff in a film to which it really belonged), though Mankiewicz’s relationship to these events, suggested by Fincher as leading to direct inspiration for Citizen Kane, seems largely to be an invention. Mank grinds through useless point after useless point, entirely missing crucial insight into what might have made Citizen Kane great, marginalising the contributions and presence of Orson Welles, who was inarguably an enormous creative force behind the film no matter what one’s stance on the eponymous Herman J. Mankiewicz might be.

Mank fosters comparisons to Citizen Kane not just in its subject. The close-up of the empty bottle slipping out of Mank’s hands recalls the famous snow globe dropping from the dying grasp of Charles Foster Kane. The celebrated use of deep focus in Citizen Kane (often erroneously reported as pioneering) by cinematographer Gregg Toland is mimicked to the effect of making us wish we were actually watching the film from which the techniques are aped.

They say that children suffer for the mistakes of their parents. The screenplay was written by Jack Fincher, David Fincher’s father, principally a journalist with this one script to his name. There is the distinct impression that the director held a certain familial reverence for the script, which is not good, and that David Fincher might have struggled with the idea of doctoring his deceased father’s words in the pursuit of a better film.

The principal sin of Mank is that it is boring, the monotonousness rendered all the starker since it is Citizen Kane – a film that still blazes almost 80 years since it was released – with which we must most readily compare it. That David Fincher has made a boring film is unexpected considering the aptitude for engaging cinema he has hitherto well and truly demonstrated. 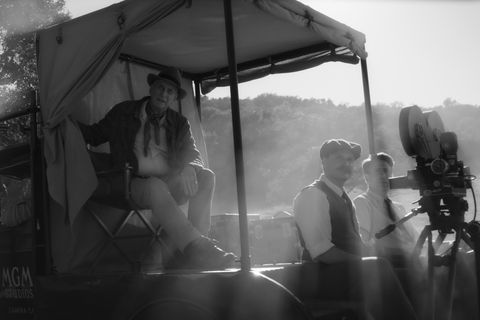 The question behind Mank is “Who Wrote Citizen Kane?” Many a film fanatic will leap at the opportunity for this question to be explored in a film such as Mank. The average punter probably couldn’t give a flying fuck. What is extraordinary about Mank in its woefulness is that it alienates both camps; far too unfocused to provide any real insight for aficionados, and so painfully dull in its execution that it shuns any broad appeal that might have made flippantly esoteric references to David O. Selznick, Louis B. Mayer, William Randolph Hearst, Marion Davies and Upton Sinclair more palatable.

In 1941, the Argentinian critic Jorge Luis Borges described Citizen Kane as a “labyrinth with no centre.” Though the comment was actually meant as praise, it is also not true. Kane had “Rosebud,” which as naff as some may find it, imbued the snapshot of Charles Foster Kane’s life with a sense of purpose. Mank, comparatively, is a fragmented mess with no focus that does a disservice to its subject and the figures that informed it.

Mank is currently playing in limited theatrical release, and comes to Netflix 4 December.