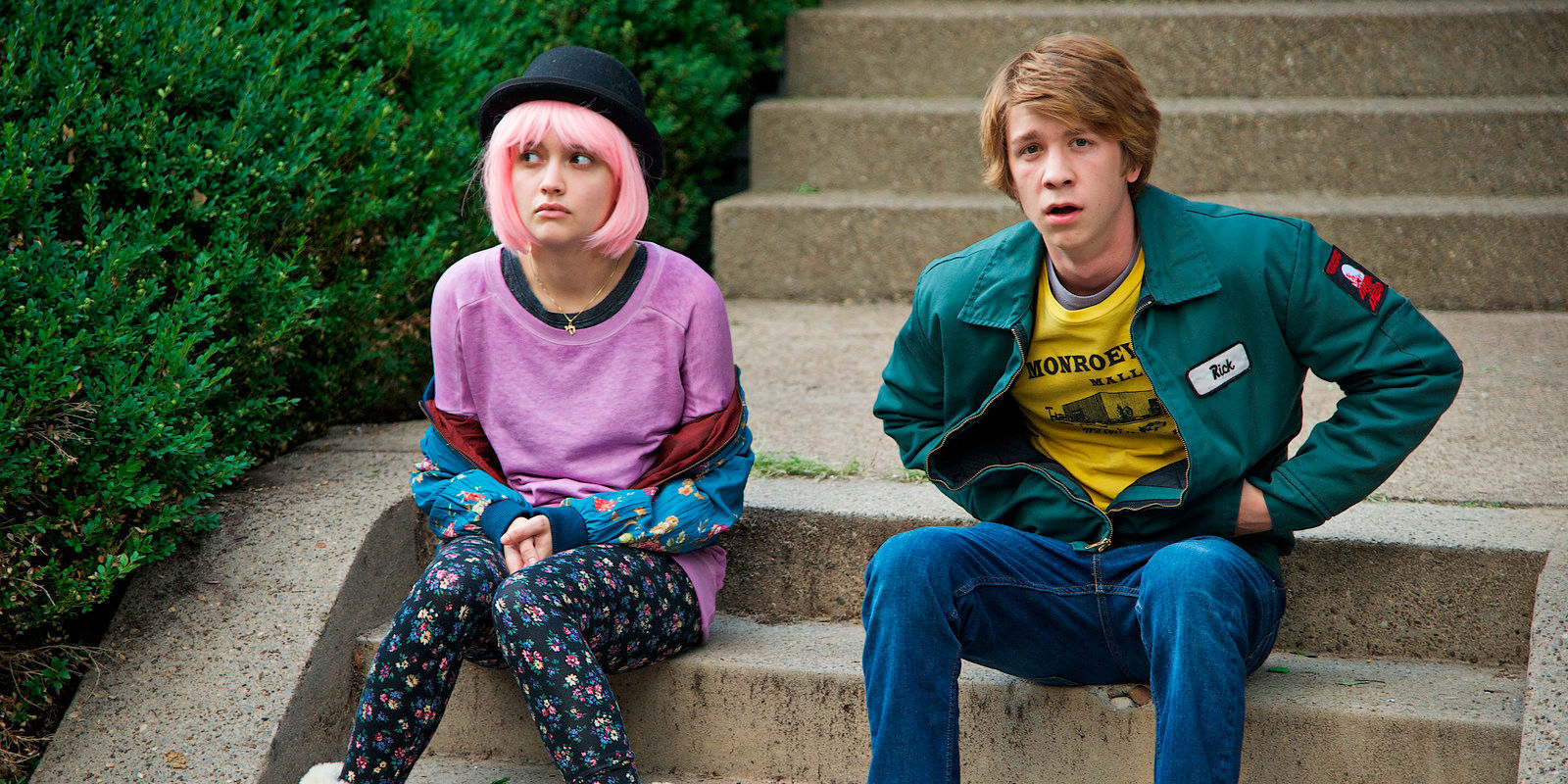 Most movies carry at least some baggage; Me and Earl and the Dying Girl carries a lot. First off, it won both the Grand Jury Prize and the Audience Award at this year’s Sundance Film Festival, kicking off a storm of hype that has had eight months to build. Then, the people who love it championed it as the anti-Fault in Our Stars, setting up lofty tonal expectations. Then there’s how it comes across in trailers, which is as a divisive Juno type, capturing a stylized version of “real” teenagers. To top it all off, it’s got a grammatically incorrect title that rhymes.

You definitely feel the baggage as you watch it, and there’s some impulse to reject it. “I get that whole Me and Earl and the Dying Girl thing that it’s going for, and I don’t want any part of it.” But Me and Earl sidesteps being too clever for its own good by also being funny, insightful and warm, without spilling over into the saccharine. Moment by moment, the film breaks down your defences. Moment by moment, that baggage slips away.

It isn’t entirely the antidote to The Fault in Our Stars, in part because The Fault in Our Stars is not quite the maudlin manipulation machine it’s made out to be, but also because Me and Earl and the Dying Girl doesn’t always avoid being maudlin and manipulative. It’s hard to tell a story about a 17-year-old with cancer without sometimes going there. The 17-year-old here is Rachel Kushner (Olivia Cooke), who has just been diagnosed with leukaemia. In a contrivance you just have to accept if you want to go along with this, the mother (Connie Britton) of one of Rachel’s classmates, Greg (Thomas Mann), orders her son to hang out with Rachel and distract her from her diagnosis – even though he has not previously been friends with her. Whether any mother would actually issue that mandate to her child is kind of beside the point, because it kicks off a satisfying narrative thrust that carries the ring of truth. 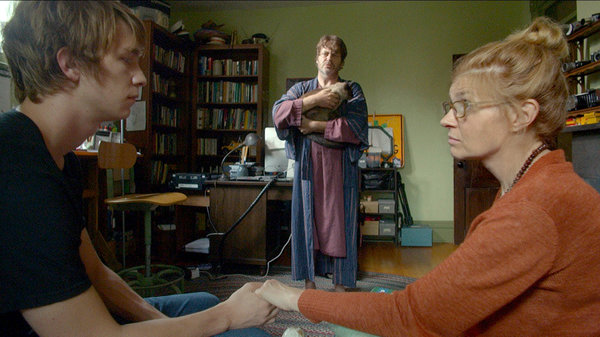 Greg is an unusual candidate for this role on the face of it, as he has made casual, low-stakes relationships with his classmates his bread and butter. (That’s also to protect him from getting too close to anyone, the result of a somewhat unconvincing poor self-image.) Whether he’s funny is beyond question, but whether he can cheer up a girl with cancer is a bit more uncertain. Yet he does cheer her up, in a refreshingly platonic capacity. That’s a testament to the great chemistry between Cooke and Mann, as well as Greg’s forthright honesty in his approach to the assignment. Greg’s closest confidante is Earl (RJ Cyler), a childhood friend he describes as his “co-worker,” with whom he has made all manner of homemade movies spoofing great cinema. (Think the “sweded” movies in Be Kind Rewind, only a lot funnier.) As Rachel, Greg and Earl grow closer, Rachel’s friend Madison (Katherine C. Hughes) proposes that they make a film for her. And then things get tough.

Me and Earl and the Dying Girl sails through its first half by being laugh-out-loud funny. Like Diablo Cody did in Juno, screenwriter Dan Fogelman has found something essential about the speech patterns of teenagers and heightened it without making it seem artificial. (Some would argue Cody failed to stay on the right side of that divide.) A good lot of this humour belongs to the absurd fake movies, such as A Sockwork Orange (the Droogs are played by sock puppets) and 2:48 p.m. Cowboy (moving Midnight Cowboy’s male escort to the arvo). It’s an extension of the film’s DIY aesthetic, which manifests itself less charmingly in the regular stop-motion cutaways.

The visual approach by director Alfonso Gomez-Rejon is a perfect match for Fogelman’s writing, as it is idiosyncratic and self-conscious, but without becoming distracting. Gomez-Rejon’s particular eye comes through in the unconventional composition of certain shots, in the swish pans between characters during conversations, in the long takes that allow the actors to really find the emotional centre of each scene. There’s no doubt Me and Earl is alive and electric. Even when it’s indebted to other films, it feels like its own entity. 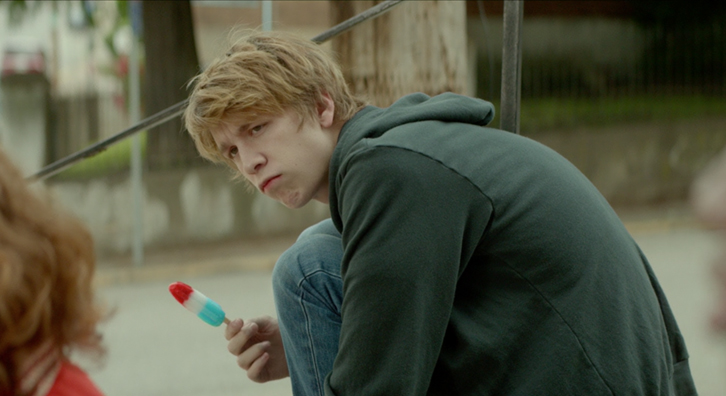 It probably does, however, contain the potential to irritate anyone who’s had their fill of excessively self-aware narratives. As narrator, Greg is always talking about our expectations as viewers and drawing attention to his story’s narrative constructs, labelling his chapters “The part where I begin senior year” and “The part where I meet a dying girl.” In the second half, as the story inevitably intensifies, some of this wears a little heavily and even becomes self-indulgent.

Still, this is a movie that does a lot more right than it does wrong, and the things it does right, it does very right. The array of memorable characters on screen is perhaps the film’s biggest triumph. Aside from the trio of teenagers, the film’s four adults really make an impression: The Walking Dead’s Jon Bernthal as a history teacher covered in tattoos, Molly Shannon as Rachel’s possibly alcoholic mother, Britton as Greg’s do-gooder mother, and the great Nick Offerman as Greg’s oddball, exotic seafood-loving father. If they are more like seasoning for the meal, the relationship between Earl and Greg is its protein. Theirs is an unusual friendship that seems devoid of genuine affection, but there’s something real about it that transcends its surface eccentricity. The fact that Greg is white and Earl is black manages to seem incidental, which is a real bonus in our race-conscious age.

As comparative newcomers, these young actors are major finds, especially Mann, who could be the best regular-guy teenager to hit the scene since Miles Tiller. We’ll be hearing more from all these people, especially Gomez-Rejon, who deserves credit for assembling the kind of movie that might one day be considered a voice for the millennial generation.