"Men in Black: International’s comedy is so dull, it almost isn’t even comedy."

"It’s dangerous, though probably inevitable, to compare the new actors they brought in with those who originated the series. "

What a good idea to cast Thor and Valkyrie in the latest Men in Black sequel/reboot. The two had great chemistry in Thor: Ragnarok, and took endless amounts of piss out of each other. Pairing one of Hollywood’s hottest commodities, Tessa Thompson, with the always-hot Chris Hemsworth gave the movie a real sense of buzz about its potential, not to mention representing a very of-the-moment correction to the gender imbalance baked in to the franchise’s very title.

Maybe they should have looked to Hemsworth’s future rather than his past, though. By all appearances, Hemsworth’s Thor is going to latch on with the Guardians of the Galaxy, and it’s that crew that has figured out the contemporary way to do human beings grappling comedically with CGI aliens. The whole opening of Guardians of the Galaxy Vol. 2 – in which Baby Groot dances while various Guardians tangle with, and are throttled by, a huge tentacled beastie in the background – is like an extended Men in Black bit, such that it might even be accused of theft. But what Guardians has pioneered is the way to be sassy, snarky and in all other ways current in its humour. To say Men in Black: International’s comedy is stuck back in 1997, when the original movie premiered, would be an insult to that very funny movie. Men in Black: International’s comedy is so dull, it almost isn’t even comedy. 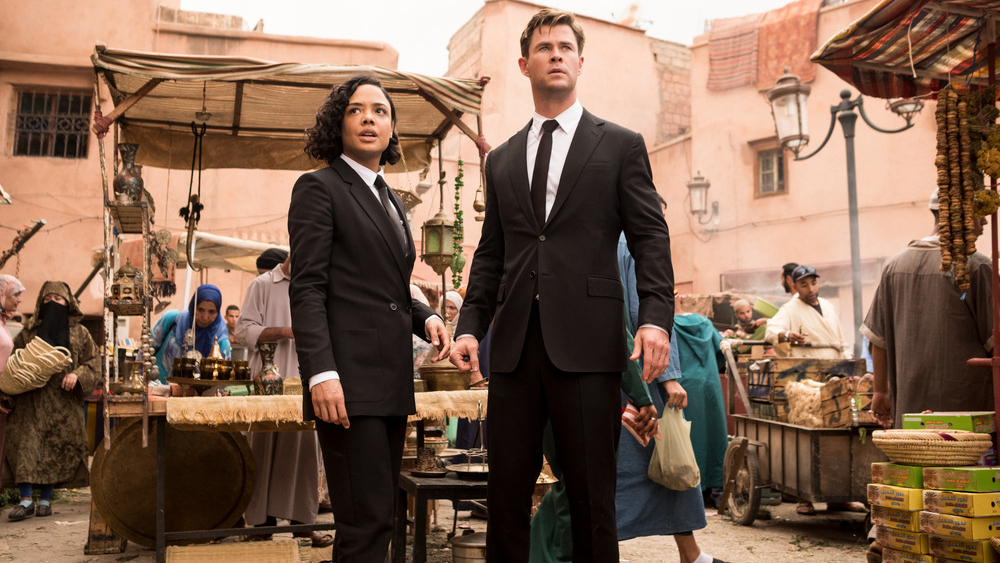 There’s a weird sense of watching this movie and seeing the spots in the script where there are supposed to be laughs or payoffs, but they’re absent. The whole thing just lies there. Thompson and Hemsworth have no chemistry under the limp direction of F. Gary Gray, a director for hire who works regularly but would rarely be confused for someone with vision. Then again, if he had brought some of the outlandish sensibilities he contributed to The Fate of the Furious, one of the most cuckoo entries in that franchise, things would have been fine. But he clearly can’t bring out the best in Thompson and Hemsworth the way Taika Waititi could, and he’s hampered by the film’s limpest element: its script.

The story picks up in present day, and makes no mention of the agents once played by Will Smith and Tommy Lee Jones except to show them in a painting devoted to the exploits of great Men in Black from the past. But first, two flashbacks. One shows us Agent H (Hemsworth) and Agent High T (Liam Neeson) saving the world from an attack by a menace known as the Hive, staged at a portal at the Eiffel Tower in 2016. We only see the beginnings of this event (with some comic setup that actually works) before shifting over to the young Molly Wright, whose parents had their memories wiped by agents after they witnessed an alien rooting through their garbage. The agents didn’t realise this young girl had also seen the alien and failed to neurolyse her, leading to a lifelong quest to seek out aliens and find the organisation that deals with them. Enter Molly as an adult, played by Thompson.

In one of many sequences that progresses without the fanfare or laughs we’ve come to expect from this franchise, Molly becomes Agent M and teams up with Agent H, who has been living as kind of a rogue Man in Black, a kind of James Bond or Indiana Jones, since the events in Paris. Hemsworth doesn’t do this as well as you’d think he would. They’d have an oil and water chemistry if they had an chemistry at all, but their relationship is established through musty one-liners that feel like placeholders for jokes the writers hadn’t yet cracked. There are numerous other placeholder-type scenes, like “the scene where something gets loose in MIB headquarters,” or “the scene where something small has big powers,” or “the scene where something is alive that you wouldn’t think was alive.”

It’s dangerous, though probably inevitable, to compare the new actors they brought in with those who originated the series. The original Men in Black was a minor comedy/sci-fi classic, one in which every decision is basically perfect, including the casting of Smith and Jones. The actors themselves may not be irreplaceable, but the traits they embody are. To work as it should, Men in Black requires that perfect blend of the unflappable (as provided by the seasoned veteran, Jones) and the incredulous (as provided by the newcomer, Smith, who is the viewer’s surrogate). Thompson doesn’t work as the gobsmacked newcomer because she’s spent her whole life trying to prove that she saw an alien when she was a child, and Hemsworth doesn’t work as the straight shooter because he’s getting drunk at games of underground alien poker. This movie can get by without Smith or Jones, but not without what they brought to the table. 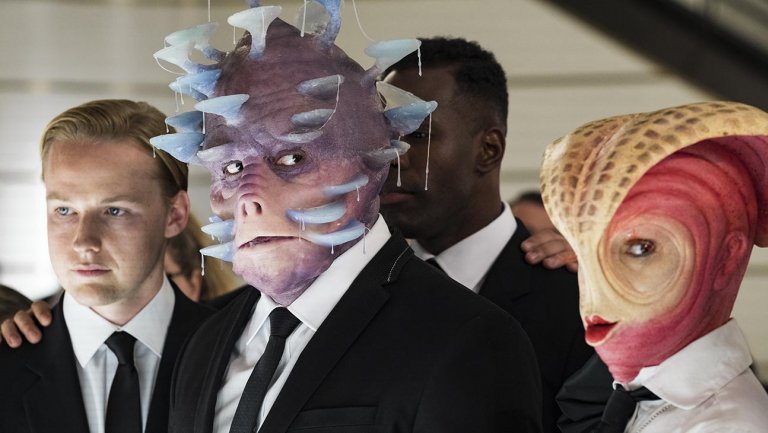 Art Marcum and Matt Holloway’s script does, or fails to do, the rest. The story they’ve concocted involves your typical all-powerful device wanted by all-powerful bad guys and a possible mole in the agency. There’s not only the mole, but the guy who so obviously seems like the mole that he can only be a red herring. See Pokemon: Detective Pikachu for another recent example of that. The film’s most enjoyable ingredient is probably the miniature sidekick played by Kumail Nanjiani. He’s a pawn in a set of living chess pieces, and he can ride around in the pocket of Agent M, who becomes his new queen after the chess queen is killed. And because Nanjiani is gifted at delivering lines, this character is almost funny. Almost.

In terms of wastes of talent, Men in Black: International got Rebecca Ferguson, one of the true acting breakouts of the last five years, on board as a villainous arms dealer. But she is introduced to the story so late, and with such indifference, that she utterly fails to register. Emma Thompson is also around as a member of the senior leadership, seemingly only so she can continue correcting the gender imbalance. That goal may be the only progressive, and in fact the only useful, thing about the movie.