"Yeah, so just in case anyone was wondering, scientists already have a pretty strong theory about where the moon came from."

"You see this a lot in very bad movies — the screenwriters can't even get themselves to the action without getting bogged down in a plot which was only an excuse to begin with."

SK: So, John, you and I went to the cinema on Monday night to see Moonfall, the new sci-fi disaster epic directed and co-written by Roland Emmerich — a name synonymous with the disaster genre. He’s been responsible for Independence Day, The Day After Tomorrow and 2012, which have all — in their own way — dealt with the end of the world and humankind’s efforts to survive. Moonfall is also the biggest budget independent movie of all time, with Emmerich and his team raising the $140 million (USD) budget without the help of streaming services or the traditional big five studios. The film’s cast is unusually low-profile — Halle Berry, Patrick Wilson, and John Bradley (previously seen as the jolly Samwell Tarly from Game of Thrones) — in that they are arguably not the current big names we’d associate with a blockbuster. Rather than immediately asking you what you thought of Moonfall, I might start by asking if you could summarise the — I guess you would call it — plot, for the readers at home. 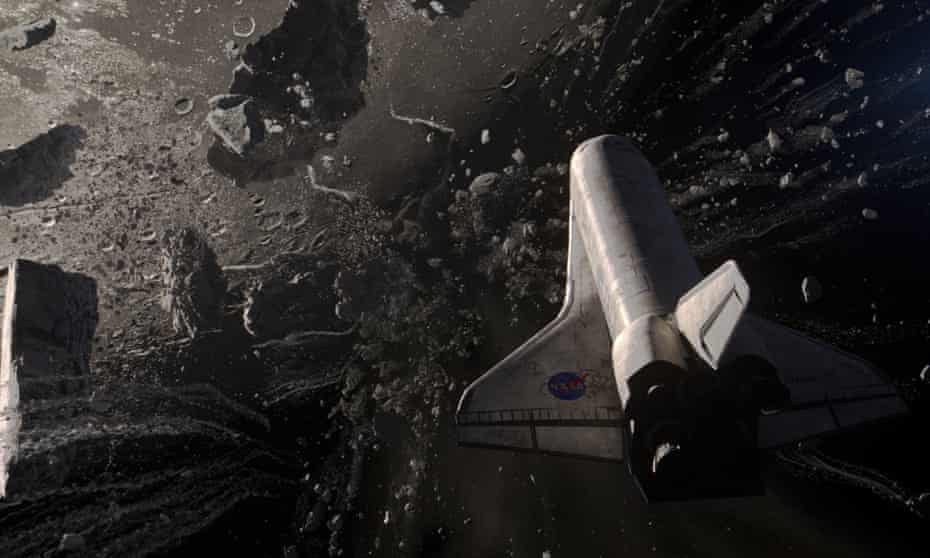 JM: The premise of this film, essentially, is that the moon is not a natural object but rather a highly advanced artificial megastructure. At the start of the film, a routine mission by astronauts Wilson and Berry turns to disaster when they are attacked by some kind of rampaging mechanical entity. John Bradley’s character is a crank conspiracy theorist who believes, correctly, that the moon is in fact hollow. When he realises that the moon’s orbit has changed and it’s crashing towards Earth, he, Wilson and Berry join forces on a suicide mission to fix the situation. There are also a few subplots involving Wilson and Berry’s families trying to survive the lunar disaster and reach safety in the Colorado Rockies. A bit of back story is revealed at the very end of the movie which explains who built the moon, and who or what is trying to destroy the Earth.

SK: Yeah, so just in case anyone was wondering, scientists already have a pretty strong theory about where the moon came from. Basically, a Mars-sized planetary body called Theia collided with the Earth approximately 4.5 billion years ago, broke into pieces and went out into orbit, eventually forming a moon. Astronomers infer this for a few reasons; one of them being that the moon is made up of of the same materials that make up the Earth. That’s fascinating, right? You know what isn’t fascinating: the plot of Moonfall. It seems like Emmerich consulted exactly zero scientists during the writing of this film, which is such a shame — because these kinds of films establish wonder and suspense precisely by setting out good science, before they get to the sci-fi part. Take Jurassic Park; it’s crucial that we learn about the cloning process, the frog DNA etc; it grounds the terror of the second and third acts. There’s virtually none of that here. The plot is really just an interminable sequence of idiotic coincidences, unexplained plot leaps and characters suddenly capable of superhuman feats. The film proposes that the moon is hollow, is powered by a captured white dwarf, and assumes that you, the audience, have no knowledge of how physics, NASA, technology, government or anything else works. But at least there’s great characters, right?

JM: This probably sounds like hyperbole, because all of these disaster films have bad characters, but I think Moonfall might have some of the worst characterisation I’ve ever seen in a film. The only character who really has any identifiable attributes is Bradley’s, and his character can be summed up as “annoying nerd.” I couldn’t tell you anything about Halle Berry or Patrick Wilson’s characters. They’re just a woman and a man. They both have families. That’s about the essence of them: they’re people with families. They’re both divorced, which I think speaks more to the screenwriters’ laziness than anything, since it’s not treated as a point of commonality between them. Emmerich even reuses the plot point from 2012 of the ex-wife’s new partner dying conveniently in the disaster, so the estranged father can return to his position as head of the family. And even though the characters are unbelievably flat, there are still way too many of them crowding the screen. You see this a lot in very bad movies — the screenwriters can’t even get themselves to the action without getting bogged down in a plot which was only an excuse to begin with.

SK: Big time. What annoyed me is how the characters were all jammed together — like Berry’s ex-husband Doug David (Eme Ikwuakor) is the military commander who wants to fire nuclear weapons at the moon before it impacts with the Earth … but he can’t, because his ex-wife Jocinda (Berry) is up in space on her own mission and he’s learnt “that he can always rely on his wife.” That this former married couple would somehow each head-up the only two attempts by mankind to save the Earth is beyond stupid. Similarly, conspiracist K.C. Houseman (Bradley) is apparently roped into a NASA mission because they’ll need someone to do calculations on the fly — even though he has no training as an astronaut and is notably mistake-prone (it should go without saying that Bradley plays his character for some painfully unfunny laughs throughout). Moonfall portends to be a film about the end of the world, but it’s a world seemingly populated and defended by about three or four characters, most of whom are deeply unappealing. 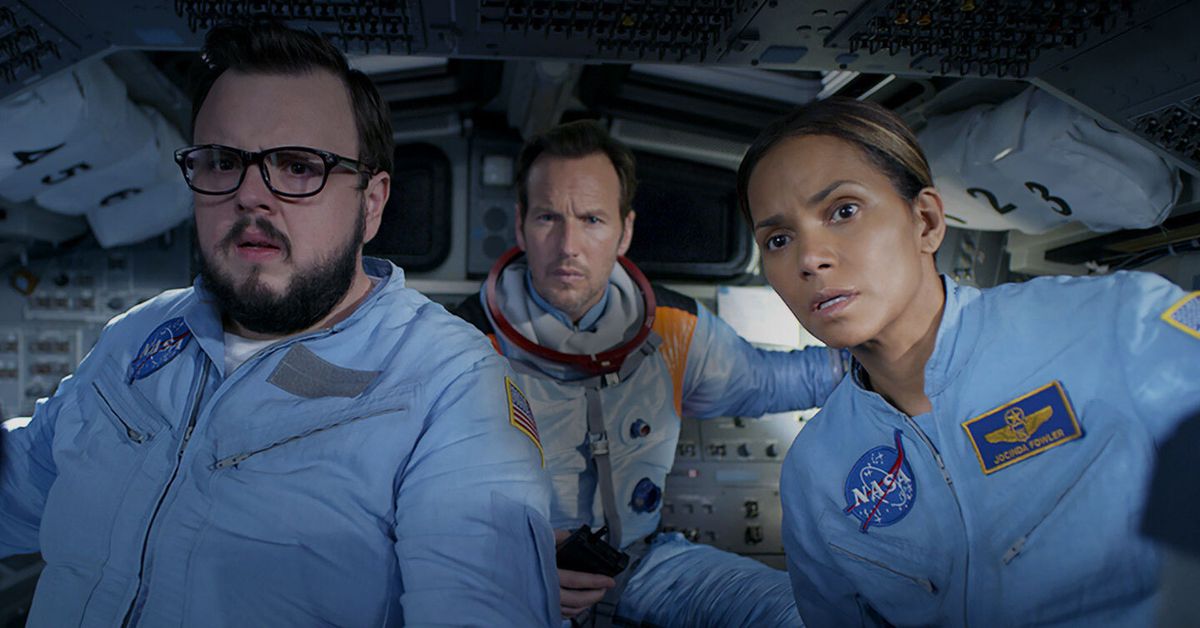 JM: Absolutely. And maybe despite this the film could work on some level if the disaster action was quality, but the CGI in this film is terrible. When a tidal wave swept through Los Angeles it looked like Grand Theft Auto. In fact, there’s very little actual screen time of cities being destroyed by the falling moon. Instead you get weird sequences like a tacked-on car chase/shootout with a bunch of mall rats who are trying to steal the family’s oxygen.

SK: I was really disappointed to not see a major western city levelled. Emmerich — for all his faults — has given us some absolutely iconic moments in the disaster genre. Think the White House being destroyed in Independence Day, or the tsunami hitting NYC in The Day After Tomorrow. That’s why we buy the tickets — not for the turgid family dynamics of the supporting cast. In Moonfall, we’re really not given much of what we want. There’s a sequence where the moon’s increased proximity to Earth causes a “gravity wave” — which is basically a tsunami that sort of occasionally floats and sends water into orbit. It doesn’t look good, nor is it very plausible. Perhaps he’s just running out of ideas as to how to destroy the Earth. Speaking of which, just what is with his fixation with ending the human race? 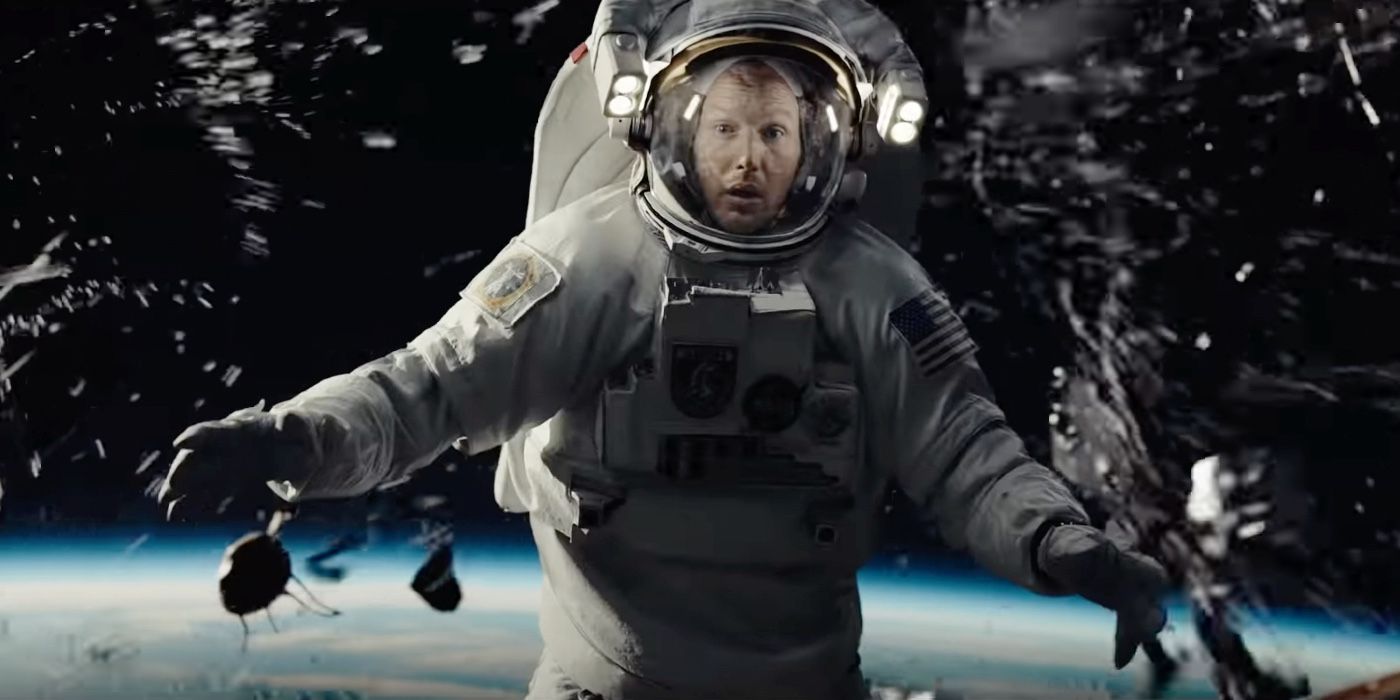 JM: Well, I’m glad you asked! So, a few years ago I was watching an episode of Amazing Interiors and they toured Emmerich’s apartment in London. His apartment contains:

Can you imagine how unbelievably cynical Emmerich must be, to turn out jingoistic pablum like Midway, when he has a diorama of Abu Ghraib sitting at home in his kitchen? That’s pretty perverse, even by Hollywood standards. But I guess what really struck me, seeing his apartment, was how fundamentally gauche and tedious it all was — much like Moonfall. The fundamental impression I got was of a man with very, very little imagination.

Now I’ve got that off my chest — any final thoughts? 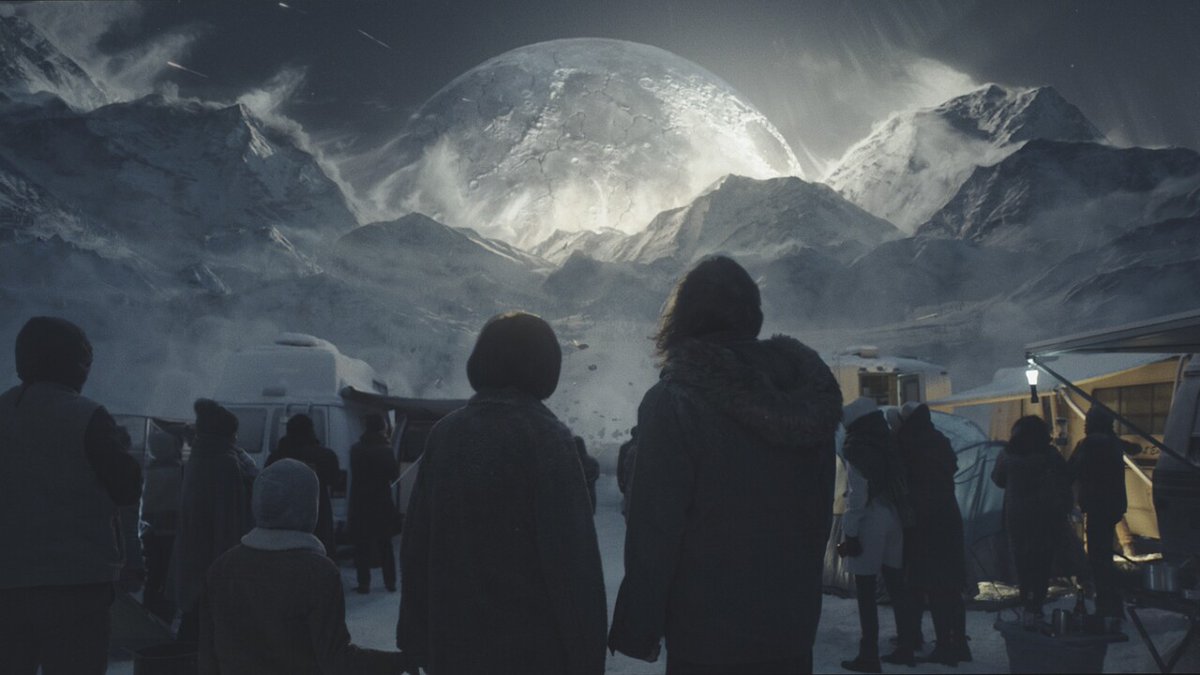 SK: Hah. Well, I think it’s pretty clear that Moonfall isn’t a good film by any standards, regardless of whether Emmerich is a cryptofascist or not. It’s poorly written and poorly cast, doesn’t deliver on special effects, destruction, excitement or science, and in my view, will be unlikely to recoup it’s $140 million (USD) budget. I’m genuinely disappointed, because I like disaster films and I’m currently predisposed to like any film which isn’t part of a franchise or a remake or a soft reboot. Unfortunately, Moonfall is a pale imitation of Emmerich’s already flawed oeuvre, and I would recommend that punters go back and revisit the high-watermarks of the disaster genre like Deep Impact, Dante’s Peak, and even Armageddon to remember how good these films can be. Also, while I’m here, I’d recommend reading the Arthur C. Clarke novel Rendezvous with Rama from 1973,  which also explored the idea of a hollowed out superstructure interacting with the Earth, and from which I think Moonfall borrowed heavily. 4/10

JM: Yep, I don’t see this movie making back its budget. You know, I think this is a rare occasion where a film actually suffered for want of studio interference! This really did feel like the work of one greedy, uninspired man. 1/10

Moonfall is currently playing in cinemas.

Averaging it out, this review definitely reads like a