With the Harry Potter and Twilight series well over and done with (please don’t think I put those two franchises in the same league, by the way), the studios are on the hunt for the next big teen fantasy blockbuster to line their pockets. With Mortal Instruments: City of Bones, they may have found just that. But while I could see the potential, the film adaptation of this popular series of books didn’t leave me wanting more.

Clary (Lily Collins) has been drawing the same strange symbol over and over again recently. She can’t get it out of her mind. Then she starts seeing events and people that no one, not even her friend Simon (Robert Sheehan) can see. When her mother, Jocelyn, disappears, Clary meets Jace (Jamie Campbell Bower), a Shadowhunter; a person who fights and destroys demons. Clary learns her own mother was a Shadowhunter, and the power is in her blood. Now she must help track down a sacred artifact, the lost Mortal Cup that her mother hid from evil forces if she is to find Jocelyn and save the Shadowhunters from destruction.

City of Bones started off strong, and then went downhill on a gradual slope. Young, likable female lead starts seeing fairly creepy, shadowy cloaked figures when no one else can is an intriguing beginning, and the initial revelation about Clary’s Shadowhunter heritage and her introduction to that world was exciting and definitely had me hooked. Once the initial excitement faded however, I started to find things more ridiculous than fun. I was disappointed, because I happen to love the fantasy genre, but it’s been a while since I’ve seen anything new that has really caught my attention. 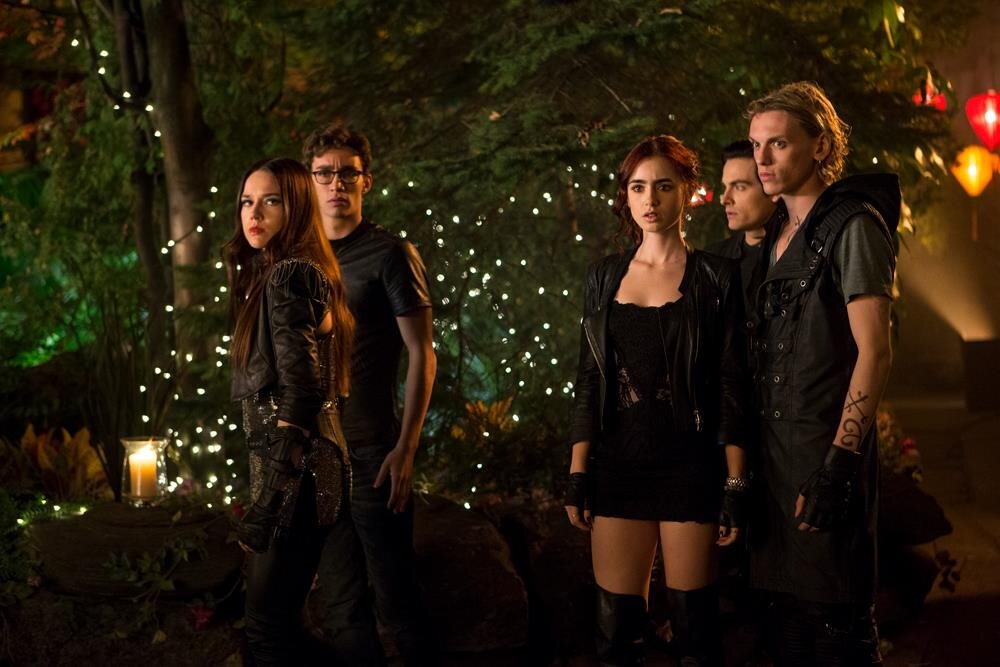 My main gripe is that the inevitable love triangle between Jace, Clary, and Simon got in the way of the plot. When the romantic subplot (which is so overblown that I could probably even call it the main plot) becomes the focus of the story, Clary instantly becomes that cliché ‘perfect’ girl that our two ‘likable but in different ways’ male leads pine over. We have Simon, who has been Clary’s best friend for years, and has been in love with her for what I assume is all of those years, as the nice guy who follows her around like a puppy. Then we have Jace, the ‘hot’, tortured, angsty soul who meets Clary and suddenly decides that life is worth living – but only if he’s with her. While the young teen girls (and even a few older ladies) giggled and squealed with delight at the romantic dramas on screen, my friend and I were trying to withhold our snorts of derision. I’m not even going to mention the twist. I’ll just say, eyebrows were raised. Less romance, more demon slaying next time please.

It’s a shame, because apart from the eye-roll inducing romance, I liked the cast. Lily Collins has some fairly kick-ass scenes, and Jamie Campbell Bower had moments of real charisma. When Robert Sheehan’s Simon wasn’t whining about how Clary doesn’t pay as much attention to him as she does to Jace, he was pretty likable as well (more so in the first half, before he started feeling so jilted). I had moments where I laughed, a couple of jump scares, and overall I was impressed with the production design and the effects. If only the plot wasn’t so out of balance. One or two exciting action sequences isn’t enough to make up for the distinct lack character development, a plot that often screeches to a halt for no other reason but to pander to the love triangle fans, and for an overall tonally inconsistent film. It tried to go for dark and moody. It didn’t quite get there.

I still think I want to read the books (I’ve had a few people I know telling me they’re okay), but I’m not anticipating this films sequel.