"... it’s the rare movie that gains footing as it goes along, that eventually excels on the strength of its plotting and the way the performers grow on you."

"The movie never precisely does become its own distinct entity."

Steven Soderbergh’s Ocean’s trilogy was never primarily classifiable as comedy, but it definitely relied on comedic elements to ingratiate itself to us. It did feature one proper stand-up comedian (Bernie Mac, R.I.P.), but the others were mostly actors who had a fitness for wordplay or charming banter that was a close cousin of straight comedy.

Since Ocean’s Eight follows the formula of those movies to a T, only replacing the men with women, it should have about the same requirements for its cast in terms of banter and wordplay. Yet this movie feels a lot more like it needs a true comedian – or, since we’re talking women, I suppose you would say “comedienne.” Someone like Melissa McCarthy would probably dominate too much, but she might have injected the laughs that could have made this movie more memorable. 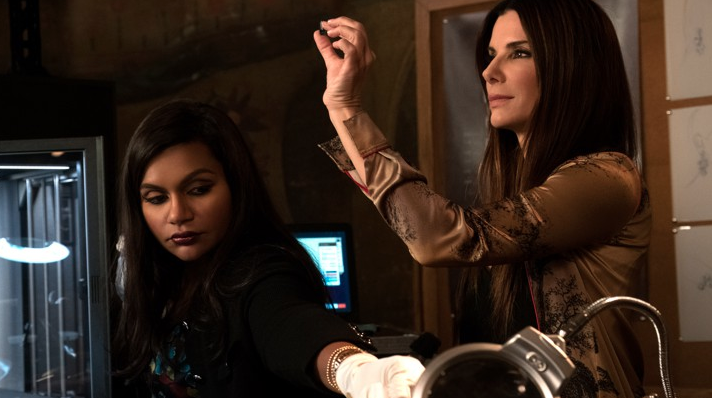 That said, it’s the rare movie that gains footing as it goes along, that eventually excels on the strength of its plotting and the way the performers grow on you. Actresses like Sandra Bullock and Cate Blanchett are not lacking in charm or charisma, but it takes the eight titular women to come together in the third act before those aspects of their personality really benefit the movie. Which is probably a good outcome for a movie about teamwork.

Bullock plays Debbie Ocean, the heretofore unmentioned sister of George Clooney’s Danny Ocean from the Soderbergh trilogy. Grifting obviously runs in the family. Debbie’s first hours after leaving prison involve stealing things from fancy department stores by pretending to return them without a receipt, ultimately “keeping” them when they won’t take back the merchandise, and scamming her way into five-star hotel rooms. 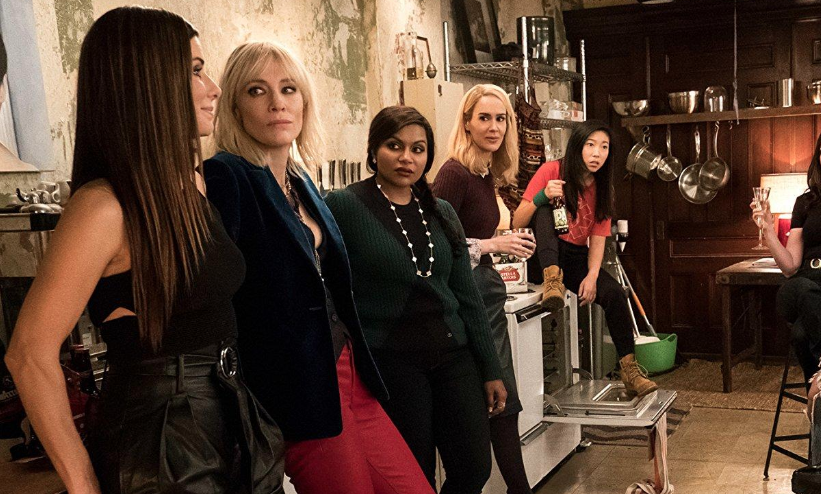 This is small potatoes, though, as Debbie’s soon in touch with her former partner Lou (Blanchett) on a scheme to steal a diamond Cartier necklace worth $150 million. They’ll get the movie star of the moment (Anne Hathaway) to wear it to a fancy museum gala by signing up a bunch of other conspirators with the skills they need to pull off the theft, including the fashion designer who will dress the star (Helena Bonham Carter), a hacker (Rihanna), a pickpocket (Awkwafina), a jewellery maker (Mindy Kaling) and a white collar thief with a garage full of purloined electronics (Sarah Paulson).

The “assembling the team” portion of the film is where it’s a bit worrisome. None of the character intros are very funny, nor do they showcase their personalities in the ways that will become more evident as the movie goes along. Bullock and Blanchett stand at a distance examining the various candidates with their arms crossed, trading clipped assessments of their skills, very much like Clooney and Brad Pitt did in those other movies. It’s here that the movie seems like it will never escape the shadow cast by Soderbergh and his troupe of collaborators. 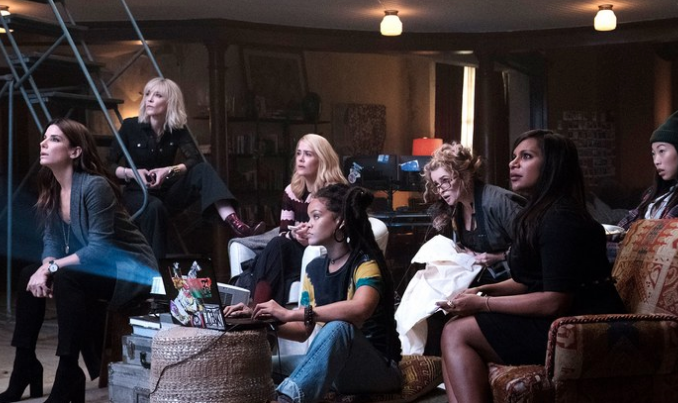 The movie never precisely does become its own distinct entity. Director Gary Ross is a competent technician who has overseen some big successes, but you’d never describe him as someone to place his own stamp on a movie. But Ross’ script, which he cowrote with Olivia Milch, does end up working well in the way the other Ocean’s scripts worked. The scheme they’ve put in motion is really clever, and it fits the characters in a way that robbing a casino might not have.

The script is smart about which things it tells us are part of the plan, and which things it only reveals once the plan is underway. Any time you wonder how they’re going to explain something that’s happening, it ends up getting a more satisfactory answer than you might expect. Coincidences are relied on, and characters get jobs related to the museum gala too conveniently. But about the same suspension of disbelief we were willing to grant Ocean’s Eleven, we grant Ocean’s Eight. Eventually we realise we’re grooving on its vibe. 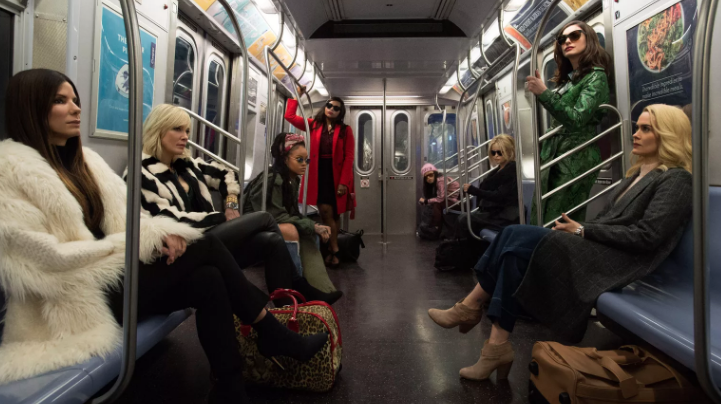 While the personalities do start to jell, there’s no doubt some of the characters are pretty underserved. Awkwafina and Kaling are the two most prominent examples of actresses not given enough to do, which is perhaps more noticeable because they’re big personalities in other aspects of their respective careers. Only one of the women (Debbie Ocean) has what you would call a backstory, and given that there are three fewer of them than in Ocean’s Eleven, you’d figure more character development would have been possible. The lack of it matters more in some cases than others.

There are standouts, though, including Bullock going big while impersonating a German celebrity, and Hathaway as the vain movie star. Though one hesitates to mention it in a movie where the focus is on the women, James Corden also has a really winning turn as an investigator of insurance fraud. The way these three liven things up in such moments draws more attention to the ways the others are comparatively quiet. 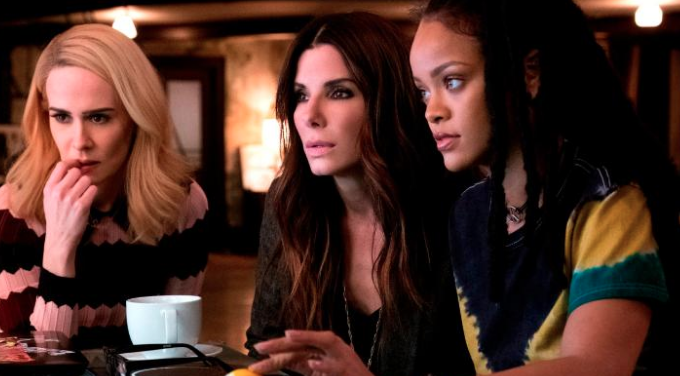 Its status as “a female version of such and such” is the type of thing that probably needs to be touched on in these dark times. The girl power is there, but it’s not foregrounded in a way that would trigger the cretins who objected to an all-female Ghostbusters. While we rightly don’t care what those people think, it’s probably a smart move for the marketability of the movie on the whole. If you’re a man, you shouldn’t think you need to leave your Y chromosome at the door to appreciate this movie.

At the end of the day you’ve got a movie that does what it needs to do, including set up potentially multiple sequels (the titles Ocean’s Nine and Ocean’s Ten, after all, are still available). Although it would be a nice bit of symmetry, Ocean’s Eight doesn’t quite earn an 8. Still, its 7 is a good outcome given that it started out heading for a 5. Like any good long con, it pays off in the end.