"...as the characters open their mouths, your breath returns with a loud thud. "

"Unable to duplicate the charm of a recent live action/animation hybrid like Paddington 2..."

Before Peter Rabbit becomes just another kids movie full of wisecracks, slapstick and tired pop songs, the movie has a moment of grace that reminds us what kind of miracles CG allows us to witness. The titular rabbit and his brood of siblings go racing through a meadow, a forest, and the English country estate that comprises their backyard. The camera captures their every lollop and leap, swirling around them, under tree roots, through brooks, past a frog sitting on a lily pad, fishing for his lunch. It’s enough to take your breath away.

Then as soon as the characters open their mouths, your breath returns with a loud thud. They’re shrill and over-the-top, and that’s not including the rooster who starts each day screaming his disbelief that the sun has come up again. 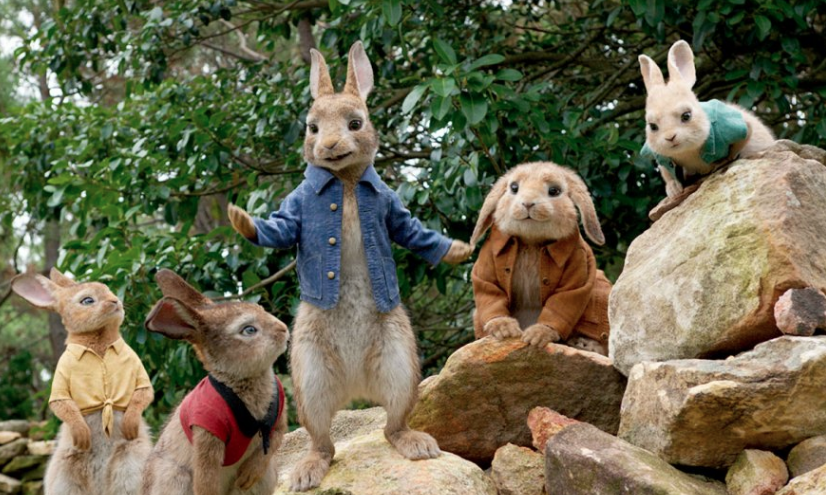 Unable to duplicate the charm of a recent live action/animation hybrid like Paddington 2, Peter Rabbit reminds us that the average kids film is much more average, relying on the same lazy shortcuts common to an average example of any product. It’s also a good reminder that James Corden has a day job he shouldn’t quit. The erstwhile talk show host has now lent his voice to two inferior children’s movies in the last 12 months, first with the much-reviled The Emoji Movie, and now as the title character here. It’s not so much that he’s bad, but that his distinct persona is starting to become synonymous with mediocre children’s fare. And possibly the quest for a paycheque.

Still, it would be unfair to just dump on the 2018 adaptation of the classic Beatrix Potter character without acknowledging the things it gets right. They didn’t scrimp on anything here, and that starts with the visuals. The verisimilitude created in the rabbits is a spare-no-expense type of commitment to excellence, as not only do they look great on their own, but they interact with the humans as seamlessly as can be. The modern standard for how hair should look is met, and then some, on these hares. 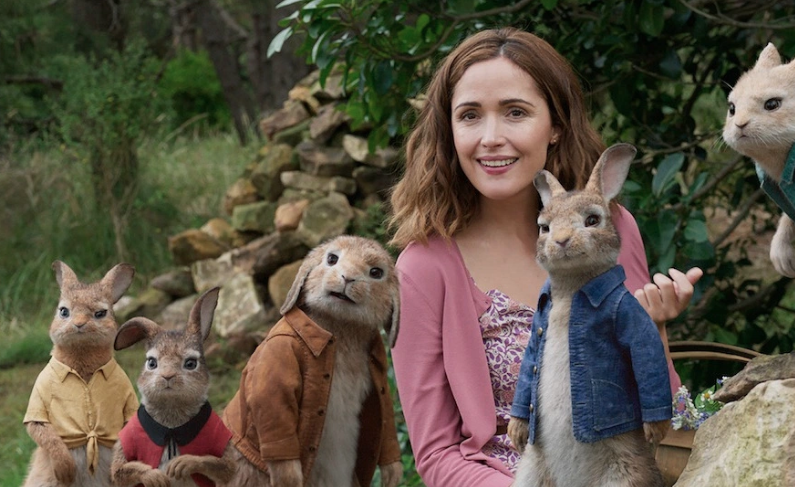 Would that there were a technical advancement on how to write a good script. Peter Rabbit has little narrative momentum as it boils down to the familiar story of a bunch of plucky heroes trying to defend a contested territory from the curmudgeon who wants to deny them. The role of curmudgeon has been handed down a generation or two from Mr. McGregor, Peter’s age-old adversary dating back to the origins of the character in the early 20th century. Oh, McGregor’s in this movie – he just dies in the first ten minutes. There begins a bout of tonal confusion that never really resolves itself.

Inheriting McGregor’s farm is his grand nephew, a London prig named Thomas McGregor (Domhnall Gleeson) who has worn out his welcome at Harrod’s and is in dire need of a mental break in the country. Thomas doesn’t realise this himself, of course, as his only goal is to fix up the place in order to flip it to another buyer as soon as possible. Standing in his way are Peter and his brothers and sisters, who have been having the run of the McGregor garden with its former caretaker vanquished.

Compelling him to consider staying on, though, is his new neighbour, an artist named Bea (Rose Byrne) who plans to manic pixie him into stopping and smelling the roses … or perhaps the carrots. Love, the gradual thawing of his character, and many vermin-related booby traps backfiring on the young McGregor ensue.

A decent amount of heart could be buried in this setup, but the problem is that the human characters are far more interesting than their rabbit counterparts. The heart related to the rabbits is supposed to come from the fact that their father was killed (and made into a pie!) by the original McGregor, and that their mother eventually died as well (of natural causes, it would seem). And though the film does hit this theme a number of times, Corden and his compatriots never sell it as an emotional core of the film.

It’s not for lack of vocal talent, either. The cast list reads like a who’s who of up-and-coming talent, including recent Oscar nominee Margot Robbie and current Star Wars star Daisy Ridley. The fact that you won’t know which one is voicing which rabbit, or care, is a big part of this film’s problem. 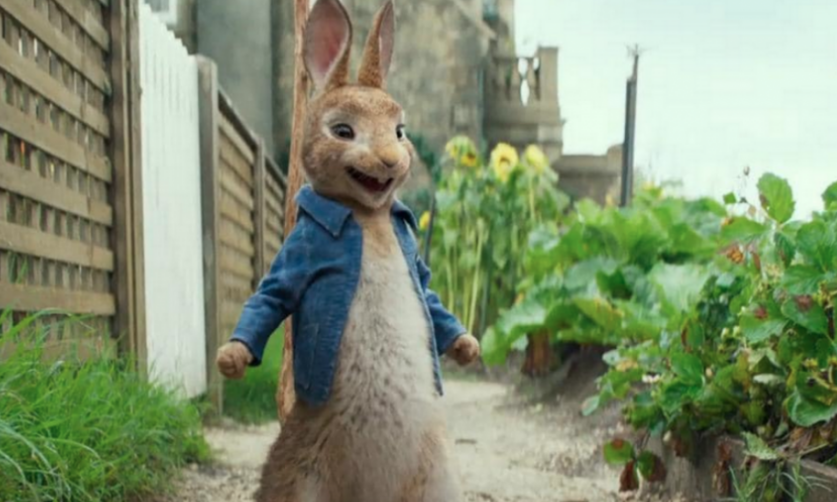 To their credit, Gleeson and Byrne do give us reason to care about the humans. Gleeson walks that fine line between total prat and viable romantic lead, and Byrne is as effervescent as ever. But Gleeson is supposed to be redeemed as the movie goes on, not the character we have found more interesting the whole time.

Maybe it’s just that different-coloured jackets are not enough to distinguish between six different rabbits, as that’s the most personality any of them gets. The defining trait of the triplet sisters (the other of whom is voiced by Elizabeth Debicki) is that they’re always arguing about who is the oldest. Relative age does not a character make. 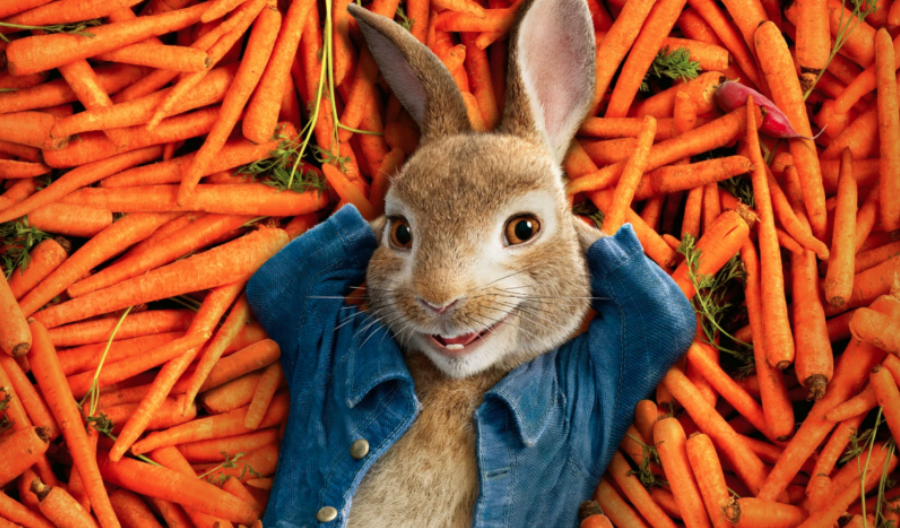 Since the rabbits are largely involved in the film’s consistent physical comedy, it further underscores the film’s key lack of heart in important areas. Again to his credit, Gleeson does what’s required of him in this area with a commendable level of sportsmanship. But there are only so many times you can watch a man get rabbit traps clamped to his butt and jolted by large doses of electricity.

Peter Rabbit was shot in New South Wales, thus explaining the presence of some familiar Australian character actors like Sacha Horler and Dave Lawson, as well as Hollywood stars like Byrne and Robbie with a fondness for working close to home. It also explains the film’s attempts to conjure our memories of Babe, sometimes blatantly, as when one rabbit says “That’ll do” to a pig.

This is the only time Peter Rabbit will be mentioned in the same sentences as Babe. Technical advances be damned; the moving mouths on those talking animals were plenty good, and the story was orders of magnitude better.