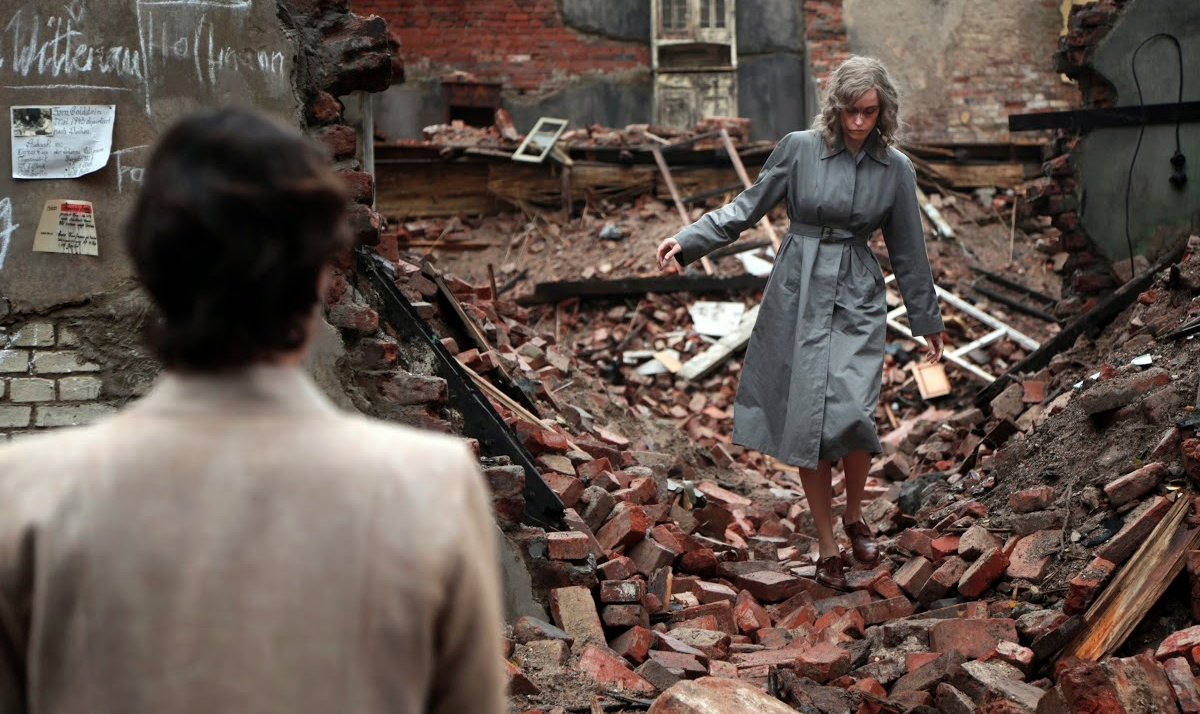 In Greek mythology, the Phoenix was the eternal bird, cyclically renewing itself through fire. In popular culture, the Phoenix has become a popular reference point for anything reborn anew. The bird conjures a dazzling sense of imagery in its regeneration. Phoenix is the new film from Christian Petzold, whose 2012 film, Barbera, garnered a string of awards, particularly in his home nation of Germany. Unlike the Phoenix of mythology, Petzold’s film is lackadaisical and gloomy. It occupies that murky point in twentieth century history in post-war Europe that Carol Reed so evocatively recalled in his wonderful film, The Third Man. But whereas Reed’s film was set in a noir-tinged Vienna, where the horrors of the war seemed like a hazy dream, Petzold’s Phoenix is set in Berlin, where the repercussions of the actions of the Nazis and the Allies are still immediately felt.

Nelly (Nina Hoss), a Jewish ex-chanteuse, returns home to a devastated Berlin after surviving incarceration in Auschwitz. She undergoes reconstructive surgery, because she was shot in the face just before the liberation of the camp. Her face wrapped in bandages, she relies on an old friend, Lena (Nina Kunzendorf) to escort her around the wreckage of a life she’s lost. Lena is doting and patient and her motivations may not be platonic.

Nelly searches for her husband, Johnny (Ronald Zehrfeld) who may or may not have betrayed her to the Nazis. She finds him working at a bar, called Phoenix, seemingly erected hastily amongst the rubble. It’s as though the smoke from the bombing has not yet evaporated. Civilians dress respectably and act abhorrently, as though the horror of war has not yet left them. The bar, like Nelly, is eager to get on with post-War life and equally unwilling to recognise that the scars have not yet healed.

Johnny doesn’t recognise Nelly because of her reconstructive surgery, but appreciates the facial similarities. His ex-wife inherited a lot of money from now-dead relatives, he tells Nelly, not realising he’s talking to the person he’s talking about. He hatches a plan to make Nelly look more like her former self, so that they can fool the powers that be and cash in on her considerable estate. There’s a dreamlike quality to the transformation that might be attributed solely to the fact that the process recalls Alfred Hitchcock’s Vertigo, another film in which a man transformed a woman’s appearance to suit his needs. That film was dreamlike. Petzold’s film may benefit from the similarities to Vertigo. The transformation in Pheonix isn’t for Johnny’s sexual gratification like it was for James Stewart’s Scotty. It’s for a broken Europe, corrupted by the war but nonetheless eager to move on and forget.

Johnny’s plan and Petzold’s method of conveying it are farfetched. This is only a problem because the rest of the film, particularly the equally captivating and repellent central performance from Hoss, is more focused on the impact of captivity in Auschwitz must have had on a person’s mental well-being. Hoss’s face is one of those rare ones that can convey pain, love, loss, suffering, strength and more in the same instant. Some of the best scenes in the film involve Nelly’s surprise at Johnny’s insistence that the people around her won’t ask about her time in the camps. They don’t want to know. They want to see Nelly looking glamorous and happy that she’s survived, not bandaged and broken.

Like its mythological namesake, Phoenix and its central character both rise to the occasion towards the conclusion, but with much less grandeur and satisfaction. The promise of the central design of the film is repressed by the dawdling pace and the doubtful credulity of the characters’ actions. A shame, since neither failing would have been so difficult to correct.