From the world of Cars (really – this is even announced before the films title), comes Planes, a DisneyToon Studios film based on a concept from Pixar legend John Lasseter. Sounds promising, but does it deliver? The short answer is no – children aside, the adult audience won’t find much to recommend – but it does have its occasional moments of charm.

Dusty Crophopper (Dane Cook) is a crop-dusting plane with a big dream – he wants to be more than what he was built for, and race in the Wings Across the World competition. With the support of his friends, Chug (Brad Garrett) and Dottie (Teri Hatcher), and the training of Skipper (Stacy Keach) a veteran fighter plane, Dusty qualifies. He meets top-class racing planes from around the world, some friendly, some who regard him with disdain. Can Dusty overcome his opposition, and his fear of heights, to take out the competition? 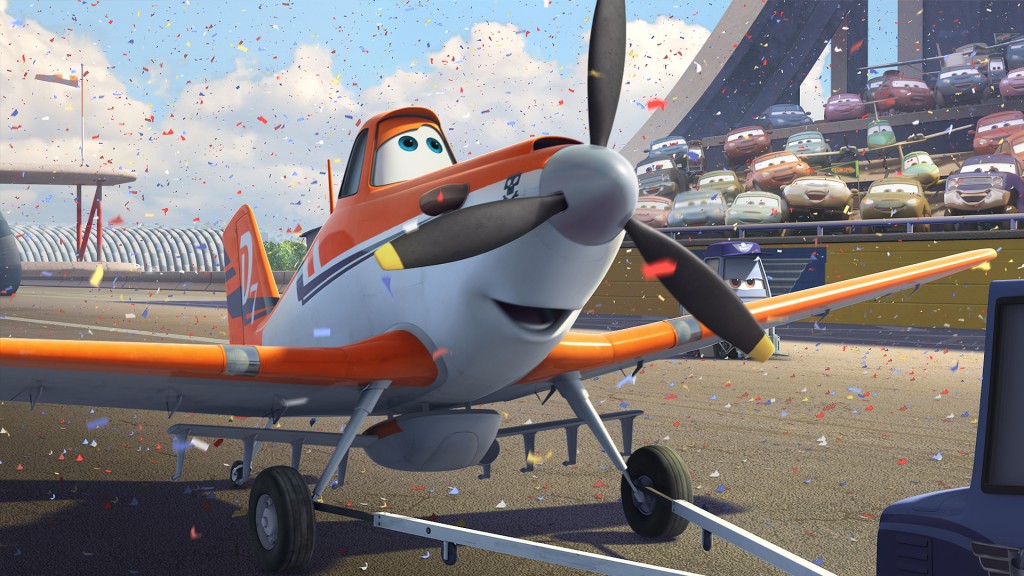 If you’re looking for a film that will entertain your kids, or your little brother or sister etc. then this will probably do the trick. Also, Planes is in 3D, so double the novelty! Unfortunately there’s not much to sing about if you’re over the age of eight. Some of the jokes were delivered with a deadpan sense of snark that made me laugh (the writers win points for working in an ‘Old Yeller spoiler alert’ joke). I also thought the use of 3D in the flying and racing sequences worked very well. I left thinking, ‘That was kinda cute…’ And then there’s the ‘but’…

Not even John Cleese as the voice of a stuffy British plane called Bulldog could save the film from its flaws. The message is positive (the usual ‘believe in yourself’) but heavy-handed, and the dialogue used to get that message across will leave you rolling your eyes. Yes, yes, I know! It’s for children, but there are so many other films with the same message that leave you wanting to cheer along with the kids! A lot of the jokes seem to have been thrown in as an attempt to appeal to the Gen Y audience (the spoiler alert joke that actually made me laugh, for example) but most of them fall flat. The animation isn’t quite up to the standard the usual Disney standard, though like I said, there are a couple of sequences that are pretty exciting to watch. And in spite of myself, I found myself willing Dusty on and hoping for his victory. It’s impossible for me not to feel for a character when they’re as nice as Dusty is, and Dane Cook does a pretty good job voicing him.

I’ve found the animated films that stand the test of time are the ones that you can revisit as an adult and find they still invoke the feeling of joy you felt when you first saw them. You find they have layers of depth and an emotional complexity that escaped you as a child. Planes sadly doesn’t have this, and its attempts to invoke a sense of nostalgia just don’t work. I swear I didn’t leave the cinema this pessimistic, but I like it less and less the more I think about it. It’s by no means a terrible movie, but aside from an afternoon of corny entertainment for the young ‘uns, it has little to offer.