"The narrative function of the growing collaboration is obvious, but that doesn’t detract from their individual charms as characters."

Disney has become so consistent in the quality of its animated product that it might be getting a little boring. That’s not to say Raya and the Last Dragon is a boring movie; it’s colourful, it has fun and well-drawn characters, it builds a resplendent world, and it moves along quickly. No, the film is a victim of the studio’s elevated standards, if it’s a victim of anything. People who find themselves tempted to praise the film more effusively, then equally tempted to squelch that praise, will have a pretty good understanding of where Disney’s strong last decade has left us. In an atypical example of bunching together similar subject matter, Raya and the Last Dragon comes on the heels of Disney’s most recent Asian-themed family movie, last year’s Mulan. Raya is certainly better than that live-action remake, and might give the original a run for its money. Still, you can feel a formula being worked to the bone, and Raya is not quite strong enough to keep us from looking past it.

The world building may be the film’s greatest triumph. Early on in Raya and the Last Dragon we are presented with a map from an ancient scroll, which shows a large river in the shape of a dragon’s body. Dotted along the banks of this river are rival kingdoms that were once in harmony, named for the different parts of the dragon at which they are geographically located: Talon, Fang, Spine, Heart and Tail. The settlements have different personalities and even different climates, indicating that this area covers a lot larger expanse than its apparent Southeast Asian setting would suggest. Then again, since no such river actually exists, comparisons to the real world are pretty much pointless.

The kingdoms have fallen out of harmony due to that oldest of human vices: greed. They all want a powerful orb that was left behind when the last of the dragons was turned to stone by an ominous enemy called the Druun. The orb currently resides, appropriately enough, in Heart, who have a benevolent guardianship over it according to the settlement leader, Chief Benja (voice of Daniel Dae Kim). Benja is training his daughter, Raya (voice of Kellie Marie Tran), to be a great warrior, and also a guardian of Heart’s most treasured object. They don’t use the orb for evil purposes, but they’re afraid the other kingdoms might, given the mutual distrust that exists between them.

In an attempt to restore Kumandra, the name once given to all the kingdoms, Benja invites envoys from the other four kingdoms for a grand banquet and to hear his proposal for collaborating to fight their common enemy. Their distrust gets the better of them, though, as Namaari (Gemma Chan), a girl Raya’s age and daughter of the Fang chieftain, infiltrates the stone’s sanctuary under the guise of friendship to Raya. Pretty soon factions from all the kingdoms are involved in a tug-of-war that shatters the orb into five fragments, in addition to unleashing the Druun, who turn many innocent people to stone and leave the prospect of Kumandra in shambles. There’s an actual live dragon as well, as the title promises, and that’s the second big creative triumph here. Not in its appearance, maybe, which is child-friendly and furry-maned, more like a My Little Pony unicorn than Smaug or some other fearful beast. Rather, they’ve gotten crackerjack casting for this part in the person of Awkwafina, who in only a couple years has gone from primarily a hip hop artist and comedian to an actress highly in demand, and for good reason. Her 21st century wisecracking is at first jarring, but after a short period of adjustment becomes the film’s primary source of humour and vitality.

The ever-expanding coterie of sidekicks for Raya, which start with the dragon Sisu but don’t end there, is also effective. The group accumulates members in each kingdom Raya reaches as she tries to put their world back together. The narrative function of the growing collaboration is obvious, but that doesn’t detract from their individual charms as characters. These include a young boy who pilots a river ferry, a baby pickpocket who travels with a band of monkey thieves, and an oversized ogre of a man with a gentle heart. Oh and then there’s the pill bug that has been with Raya from the start, which has grown to the size of a horse over the course of the narrative, and can convey her about on its back when rolled up into the shape of a wheel. 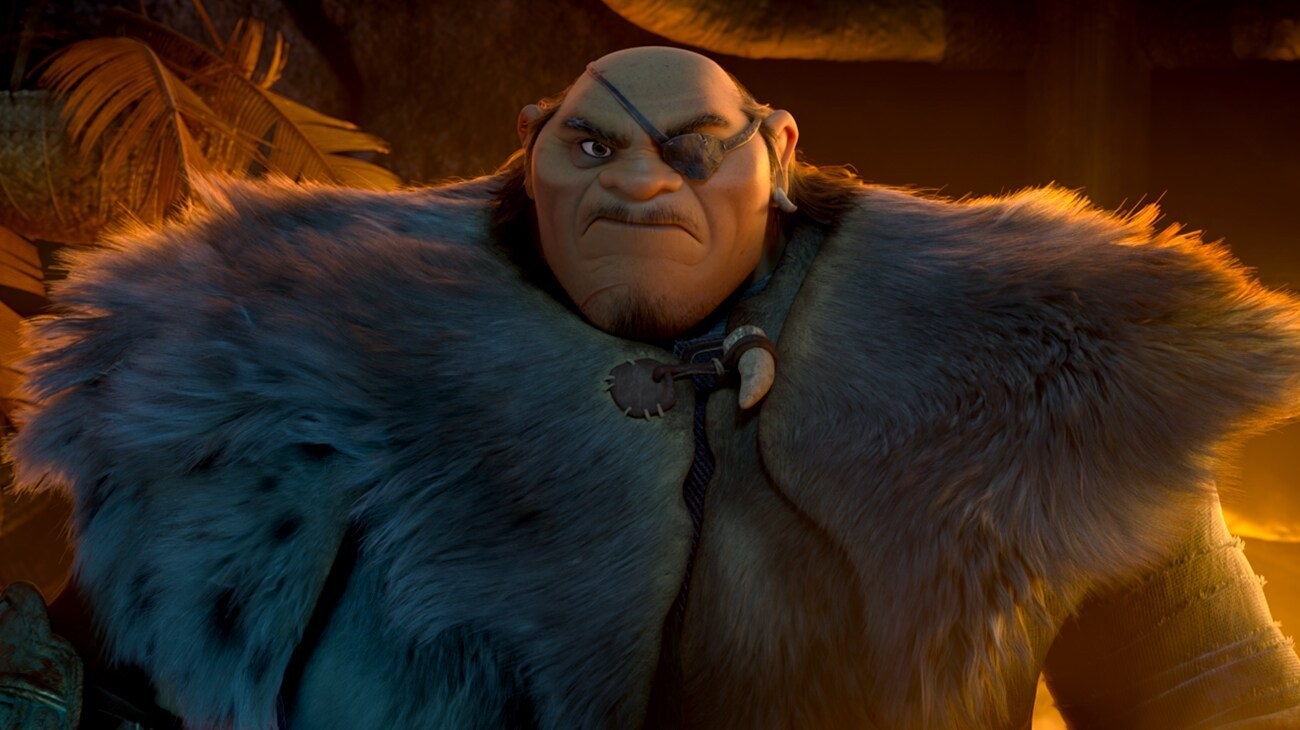 Unfortunately Raya herself doesn’t make the impact she should, which is no knock on the voice work of Kellie Marie Tran. It’s lovely to see that Tran has landed on her feet after the darker corners of the internet chewed her up and spat her out following the recent Star Wars movies. She gives the character plenty of charisma. One wonders, though, if Raya had a tough act to follow coming so soon after Mulan, who if not a better character, is certainly a more established one. Raya has sort of the same skill set and narrative function as that character, meaning maybe it would have behoved Disney to separate the two movies by a couple years on the release schedule. 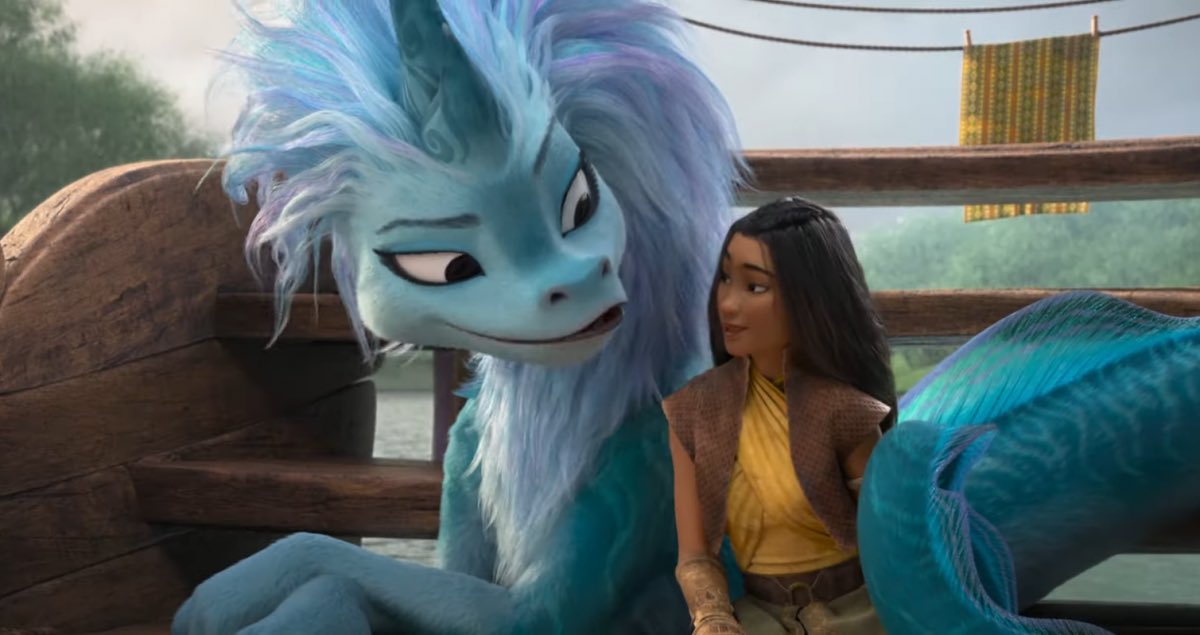 How much viewers appreciate Raya and the Last Dragon may depend on where they currently find themselves on that continuum between exhilaration and exhaustion when it comes to this type of movie. By “this type of movie” I mean one with characters learning to work together to overcome adversity, set against a fantasy backdrop with an intricate mythology. It’s a tried and true approach to family filmmaking, but after a certain saturation point, whose arrival is different for each viewer, it starts to feel like the same ideas dressed up in different costumes. Fortunately, Raya and the Last Dragon has really good costumes.

Raya and the Last Dragon is currently playing in Australian cinemas and for a premium rental price on Disney+.