Growing up near Melbourne, you can’t really escape the sounds of the Australian Grand Prix. Until I saw the documentary Senna, I never thought I could be interested in a film about Formula One. I don’t pretend that I’ll ever be familiar with the sport, but I was more than looking forward to Rush, expecting a great deal of excitement and action. I got all that and more.

Based on a true story, Rush explores the on and off circuit rivalry of F1 legends Niki Lauda (Daniel Brühl) and James Hunt (Chris Hemsworth), from their beginnings in Formula 3, to the events of the 1976 World Championship that captured the attention of the world. The film also stars Olivia Wilde in a turn as famous model Suzy Miller.

The film takes maximum advantage of the high-octane, intense environment of the track, with fast-paced editing and claustrophobic camera-work getting in as close to the action as possible. We are constantly reminded how dangerous, how life threatening, F1 racing is. I sat half in awe, half aghast at the danger these drivers placed themselves in. The flurry of the race commentary and the cheers of the crowd are drowned out by the roar of the engines and Hans Zimmer’s thrilling score. It truly makes for an immersive experience. There is a bit of an unfortunate use of voice over to set the story at the beginning, and again at the end as a kind of epilogue. I found that a bit jarring and unnecessary, but once the film really gets going the voice over is dropped and you can really settle into the story. 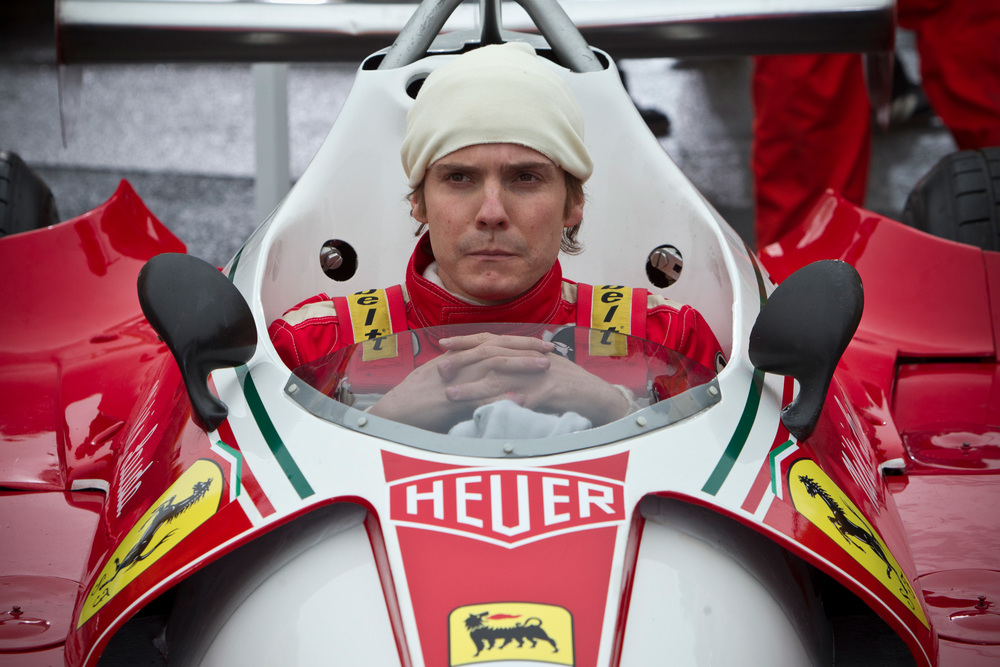 Of course, Rush is about more than the rush of adrenaline that comes with the race (see what I did there?) It is a portrait of two of the top names in motorsport. Lauda and Hunt are portrayed as two men with vastly different ideas on how racing should be approached. Lauda is shown to be much more about the logic and the mechanics, and as much more concerned with safety than some of the other drivers. Hunt on the other hand, is portrayed as much more of a daredevil, someone who acts on instinct and in the spur of the moment. But, they both share a passion for racing and a huge amount of ambition that sees that sees them grow closer, even as it feeds their rivalry.

Brühl and Hemsworth both put in fine performances. Hemsworth manages to succeed at playing a womanizing, arrogant asshole, while still somehow remaining likeable, even if you’re shaking your head at his antics. You can’t help but think of him as a fun guy. It is Lauda who is at the centre of this film though. He is portrayed as being a little bit disliked by the other drivers, something of a killjoy, but I was much more invested in his story than in Hunt’s. Hunt is out to win and have a good time; Lauda’s motivations are much more reserved and Brühl delivers a subtle, nuanced performance to match. I particularly enjoyed his scenes with Alexandra Maria Lara, in the role of Lauda’s first wife Marlene. However, it is when the Brühl and Hemsworth are on screen together that the film really shines. They offset each other perfectly, and their verbal jousts were always good for a chuckle. They manage to capture a really satisfying feeling of mutual respect, and it’s that that makes this such a fulfilling story – far more than if it was simply a film about winning races.

It plays to the sentimental, but Rush is a heart pounding, brilliantly acted drama. F1 enthusiast, or a layman like me, there’s more than enough action to dazzle you, and a story to keep you captivated until the final credits roll.