"Riley’s got a couple of major targets for his satire, and he intertwines them successfully."

Jordan Peele is thanked in the credits of Boots Riley’s Sorry to Bother You, and you can see why. I’m sure Peele added some of the value that typically warrants a thank you, like reading a draft of the script, or calling in a favour to acquire funding/move something forward. But Peele also, quite definitely, provided inspiration for Riley via his 2017 smash, Get Out. Sorry to Bother You has so many echoes of that Oscar-nominated film that it’s almost not possible to discuss Riley’s movie without name-checking it.

So instead of avoiding the impossible, let’s just dive in. Both are films by African-American directors using extended metaphors to explore the place of black people in a white world. Both temper their justified rage through the tools of irony and black comedy. Both also start out as one thing before turning into something batshit crazy you could never have predicted. (If that sounds like a spoiler for Sorry to Bother You, don’t worry, because you’ll never predict what that thing is.) Both even feature actor Lakeith Stanfield, in a similar role, though he’s the star of Bother and a supporting character in Get Out. 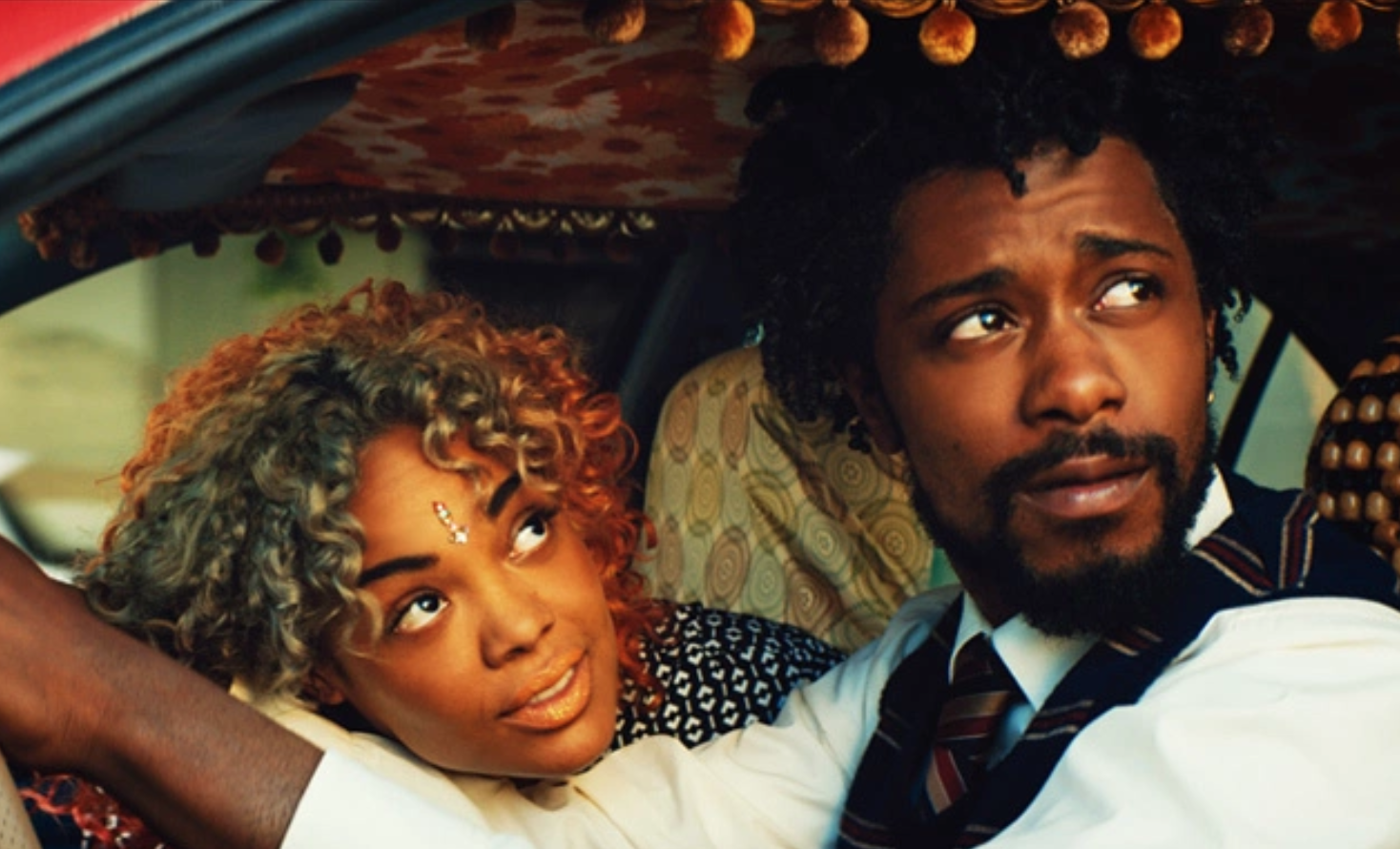 As is often the case when one follows the other, the follower doesn’t land quite as strongly with its commentary, nor see through its vision quite as clearly. Make no mistake, though, that Sorry to Bother You reflects a creative mind that’s oozing vision. Riley has made something that we must, and should, grapple with. It’s got a lot of good-weird, some bad-weird, and ambition to spare.

Stanfield is Cassius Green, known to his friends as “Cash,” and since money in America is green, we’ve got one of those character names that tells you this guy’s priorities. At first money is merely a means to an end for Cash, who lives happily enough in a slob’s paradise in his uncle’s garage, but who may lose that because his uncle is being foreclosed on.

Once he’s started working for a telemarketing company, the dollar signs start to pop into his eyes for their own sake, as the promise of becoming a “power caller” with a virtually unlimited financial ceiling entices him in a rather unsavoury way. Especially since his high sales are the result of using his “white voice,” which tricks callers into thinking he’s a carefree white man who doesn’t need any of this and would just as soon jump in his Ferrari as hawk a product.

Having clearly sold his soul for the holy dollar, Cash alienates his radical artist girlfriend, Detroit (Tessa Thompson), as well as a couple workplace friends: his long-time mate, Salvador (Jermaine Fowler), and Squeeze (Steven Yeun), a labour advocate trying to stir up a work stoppage so the telemarketers can get paid decently. As the mysterious world of the “power callers” is further revealed – and as Cash must keep speaking in his “white voice,” courtesy of comedian David Cross – it becomes clear that Cash is working for dangerous people with questionable agendas. 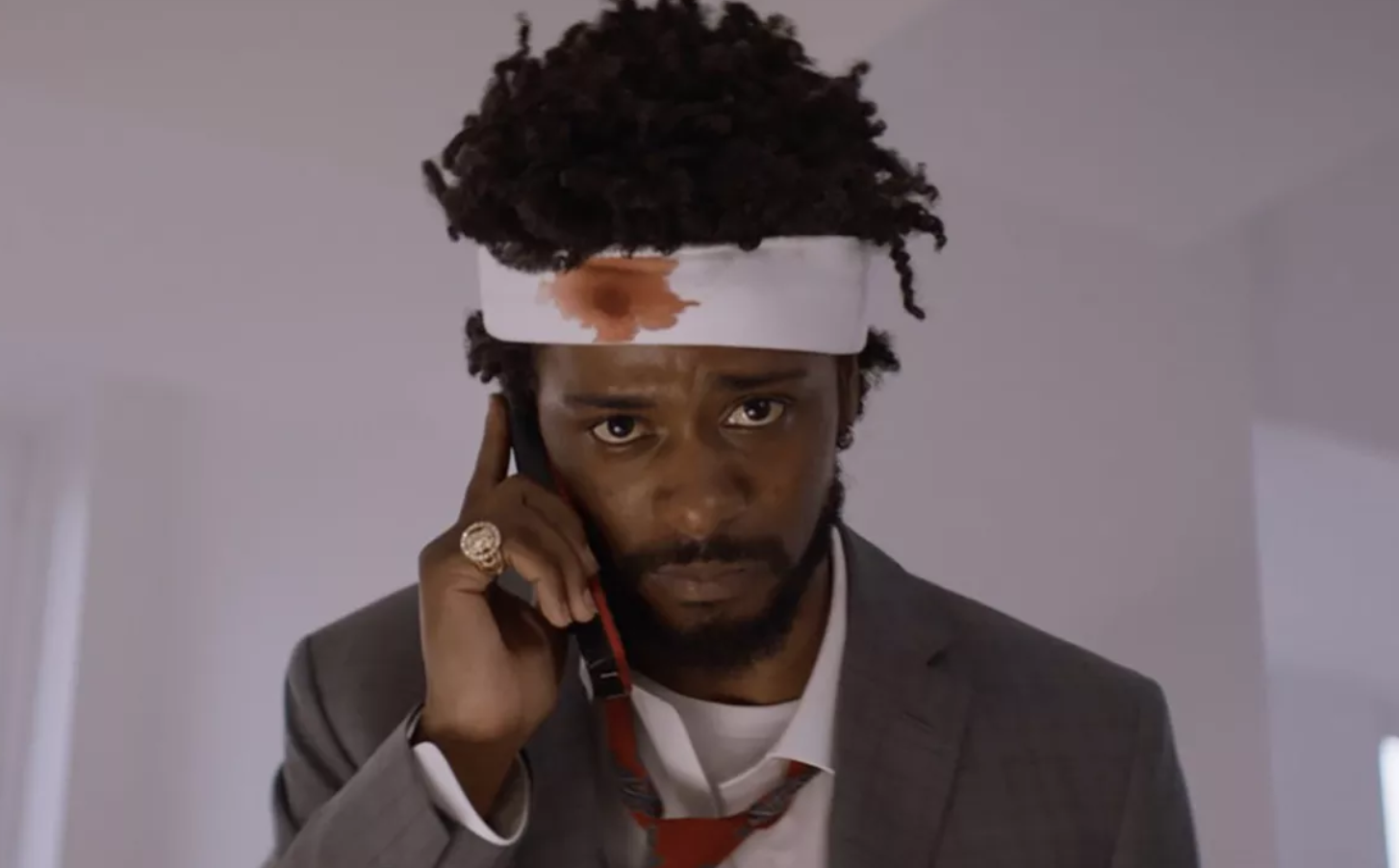 An early sequence is a good tone setter for what kind of film this is. On his very first call at the telemarketing company, as he’s heeding the mantra to “stick to the script,” Cash notices the floor rumbling beneath him. Suddenly, he’s “fallen” into the dining room of the person he just called, so they can look him in the eye as they hang up on him. This is followed by a flurry of similar interactions, which are pure fantasy but which perfectly distill the essential invasion of privacy perpetrated by Cash and his coworkers. Some of them are comedic, as when Cash falls in on two people having sex, and some tragic, like the recent widow who begins to tell him her life story. Riley sprinkles this playful approach throughout his narrative, but uses it sparingly so it never becomes gimmicky.

The film’s casual relationship to realism extends elsewhere, as Riley has a sardonic view on what passes for entertainment in our world. The most popular TV show is reminiscent of Mike Judge’s Idiocracy, called “I Just Got the Shit Kicked Out of Me.” There’s also a major company that gives its employees free housing and food – though they both eat and sleep in these little bunkbeds the company provides them – in exchange for a lifetime work contract. But it’s not slavery. No way, says the CEO (Armie Hammer). 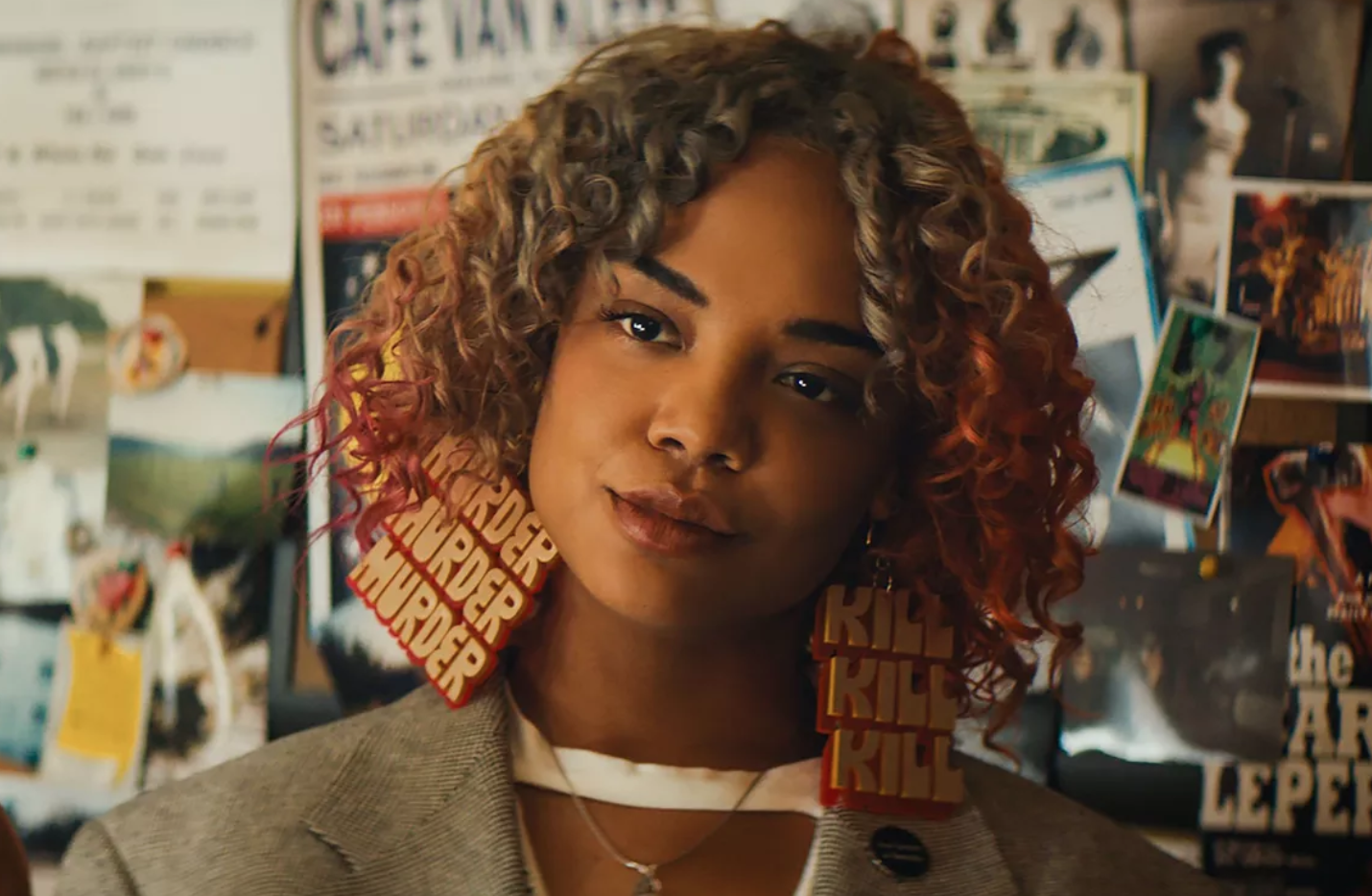 Riley’s got a couple of major targets for his satire, and he intertwines them successfully. A surprisingly strident view on worker’s rights is combined with the issue we’d expect would be nearer and dearer to his heart, the treatment and exploitation of blacks by whites. However, his perspective on this is not uncomplicated. Cash shoulders a lot of the blame for his usury by the men in the ivory tower who demand that he use his “white voice” at all times. It’s a step further than Get Out, in a way. While the protagonist in that film is wary at all times, this one is seduced a little too easily, suggesting the perniciousness with which white America can convince black America to act against its own interests.

Sorry to Bother You calls to mind another 2018 film that deals with a black character putting on a white voice. In BlacKkKlansman, John David Washington supplies his own version of the voice he perceives will be “white enough” to pass as a white person on the phone with a klansman. Riley adds a layer of remove here by having David Cross do the white voice for Cash, while Patton Oswalt white-voices Mr. ______, a mysterious “power caller” with crazy facial hair and an eye patch who is Cash’s black tour guide in this white world. Riley’s approach signifies that Cash and Mr. ______ have literally become different people when they step into this environment in which they repudiate their own beliefs and identities. (Why Mr. _____’s name is never revealed, and is in fact bleeped out whenever it is spoken, seems just to be one of those delightful quirks of Riley’s sensibility.) 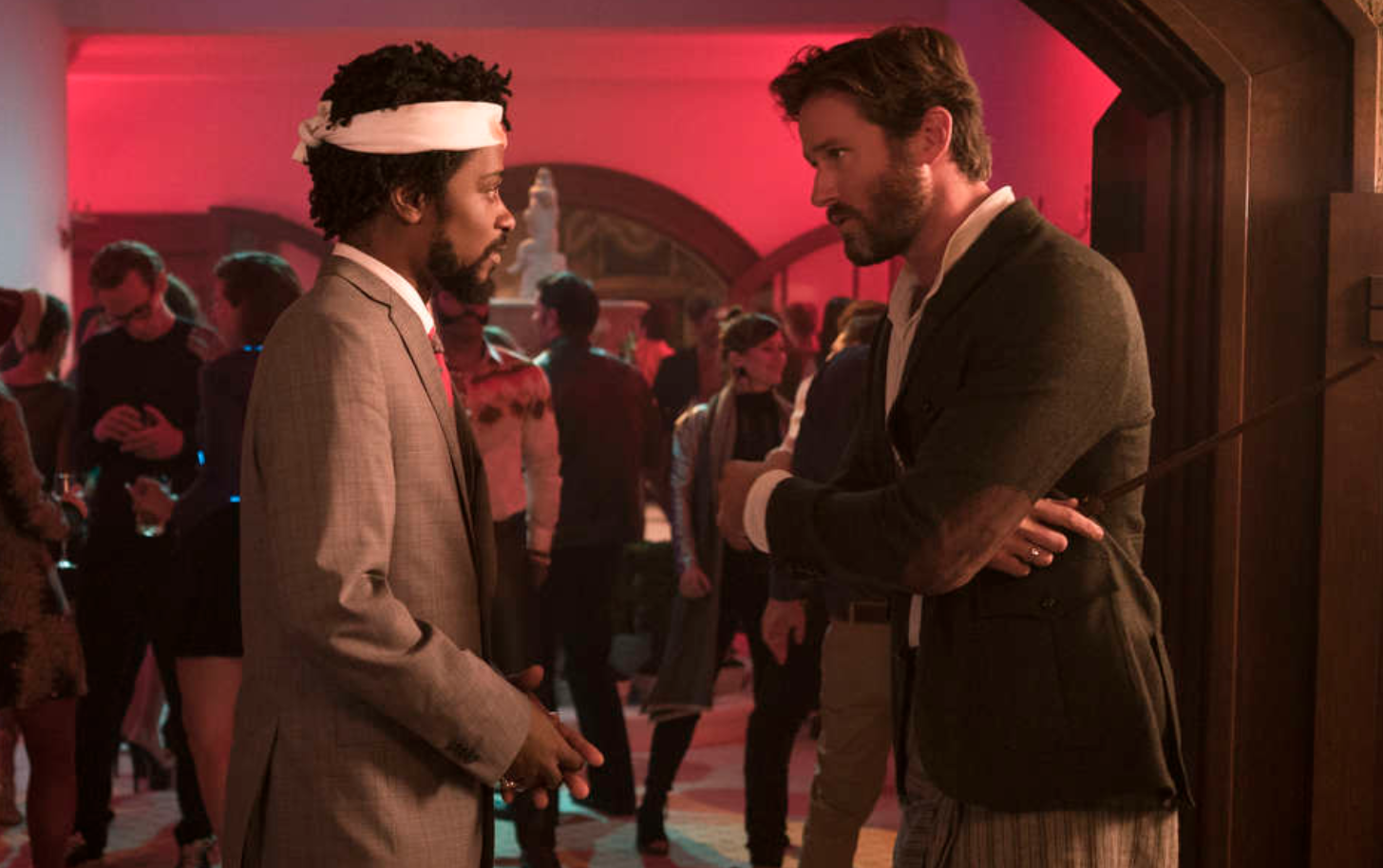 This need to supplicate yourself to a white world is not uniquely Cash’s. Detroit, a maker of outrageous earrings and other confrontational art, lapses into her own version of a “white voice” while trying to impress art world bigwigs at a gallery opening. Hers is British and is voiced by actress Lily James. So even in pursuit of the ultimate expression of her selfhood via her art, she cannot be herself.

These issues are all fascinating to ponder, and continue to get juiced by Riley’s outside-the-box sense of humour. Where he takes it all is something you will either go with, or not go with, as various metaphors get pushed past their breaking point into something bizarre and polarising. Sorry to Bother You is rough around the edges and it doesn’t always work, but you get the sense Riley wouldn’t have it any other way. It’s a creative scream that deserves to be heard.