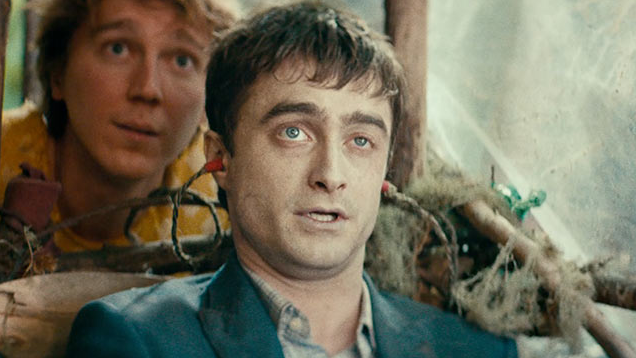 There’s a tradition among actors known for one particular role to take parts that are as far afield from that role as possible, just to prove that the character that made them famous doesn’t define their limitations. Daniel Radcliffe has taken that resolve further than most, never more so than in Swiss Army Man, in which he plays a man who is dead for the entirety of the movie – yet nonetheless spends much of the running time farting. Swiss Army Man is certainly the most bonkers movie of 2016, but it’s also the most magical, the most profound, the most hilarious, and the most heartbreaking.

How do you get all that from a movie about a farting corpse? Crazed geniuses/enlightened poets Daniel Scheinert and Daniel Kwan, credited on some posters as “Daniels,” have taken that famous bit of biological trivia that a dead body continues emitting gases for hours (days?) after it expires, and teased it out into a narrative feature. Radcliffe plays that corpse, first completely inanimately, but in increasingly less-dead fashion as the narrative goes on, attaining an inspiring state of non-death that saves a man who is literally at the end of his rope. That man is Hank, played by Paul Dano, who sees the corpse he names Manny wash up on the shore of the deserted island where he’s been stranded for God knows how long. Long enough that’s he’s got his head in a noose affixed to the side of a cliff when he spots the beached body. At first believing him alive, Hank attaches to that as a sign not to kill himself. But upon determining that Manny has in fact drowned, he nonetheless finds something about the corpse – its persistent flatulence, maybe – that provides him the will to keep trying to save himself. And as Hank starts carrying Manny around, Manny begins communicating with him and helping him in decidedly unexpected ways, many of which involve the creative repurposing of his physiognomy. How much of this is in the untethered Hank’s mind is unclear, but Scheinert, Kwan, Dano and Radcliffe are so successful at transporting us to this place and into this mindset that you want all of it to be real. 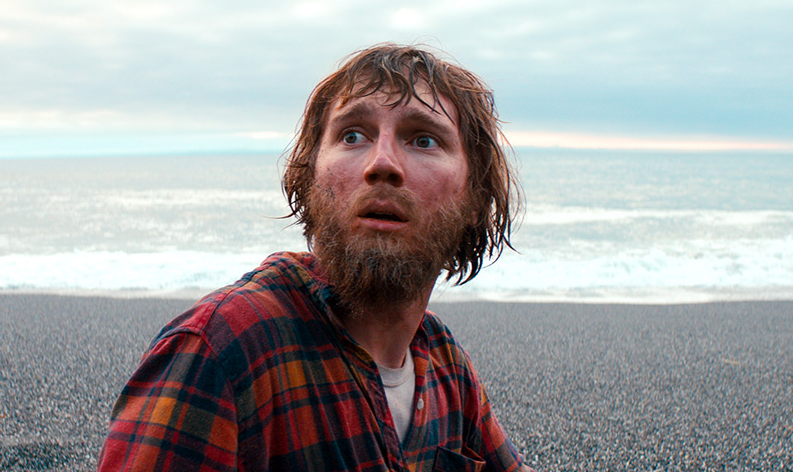 To say Swiss Army Man is like no movie you’ve seen before is kind of self-evident, though it does have a spiritual kinship to certain other works of visionary cinema, most notably Spike Jonze’s Where the Wild Things Are. Dano was in that too, though just in voice (unless he actually walked around inside one of those costumes, which I doubt). In fact, as much as Radcliffe doesn’t want to be defined by the role of Harry Potter, Dano has already become defined by his uncanny ability to select exciting projects, all of which he elevates with his distinct brand of confronting naturalism. As Hank finds a companion in this human version of Wilson the volleyball – Hank being a bit like Hanks in that way – we come to discover just how incredibly lonely and sad and damaged this man is. But also that he’s got an eye for transcendent beauty, for the marvels of the way our world inexplicably provides us what we need, when we need it, and is gently nudging those who are deserving toward an unlikely optimism.

We’ve already hinted that Manny becomes less dead as things move along, so let’s talk about that. Radcliffe does quite a good job of not moving, looking vacantly through one glassy, half-opened eye as he succeeds in not breathing. But eventually more is required of him, and Manny develops a personality that’s somewhere between that of a toddler and that of a mentally disabled person. As he inches his way back from rigor mortis, he begins asking Hank tentative though frequently spasmodic questions about this world in which he’s found himself, as though he’s an amnesiac awakening from a long coma. Talking out of a mouth that barely opens with his head often drooping awkwardly toward one shoulder or the other, he conveys a childlike awe, one that is never precious or sentimental, but simply unquenchable. Hank undertakes to teach him nothing less than the grandest human emotions, like love and fear, and steadily unveils his own troubled backstory while trying to get Manny to remember his. 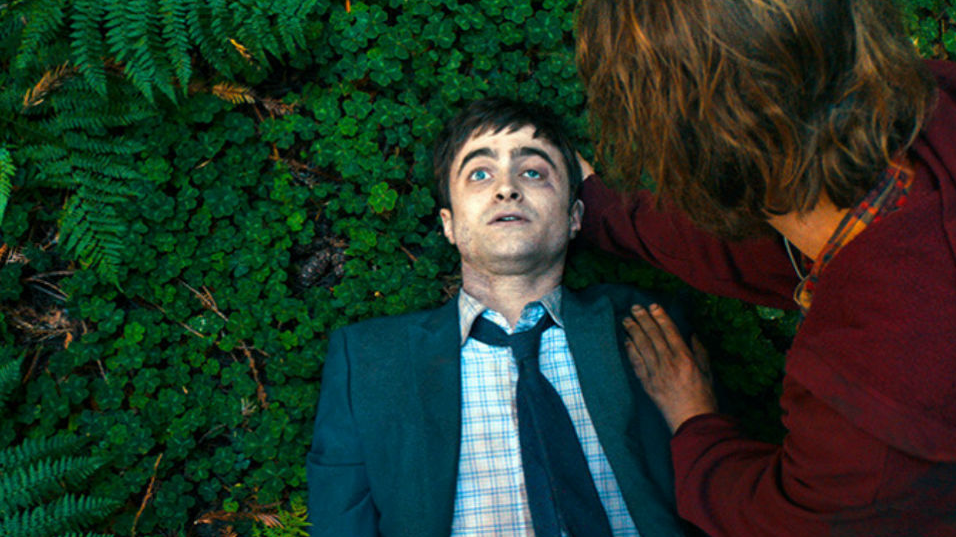 Swiss Army Man careens back and forth in the most pleasant way between these grand human emotions. While there’s no doubt that the Daniels are trying to stir our souls, they haven’t lost an ounce of their recognition of the absurdity of this scenario. Laughter will erupt in the audience throughout this movie, whether from a moment of unexpected physical comedy, or a perfectly phrased remark from either Hank or Manny. The very next moment, though, the movie will turn deeply introspective, enough to make your eyes unfocus in a state of reverie. The exquisite music helps coax these fugue states, composed and performed by Andy Hull and Robert McDowell of the band Manchester Orchestra. It serves a similarly indispensable role as Karen O’s Where the Wild Things Are score, highlighting the film’s thematic grace notes with its plaintive instrumentation and haunting falsettos.

The only thing leaving Swiss Army Man short of perfection is that it does not totally stick the landing. While the film’s conclusion is probably perfect in some respects, in others it is lacking, ending in a manner that feels more melancholy than affirming. Really, though, it’s just that any ending to such unbridled creativity is a disappointment. It’s too much to ask for something this unconventionally wonderful to leave us with a conventional sort of satisfaction.