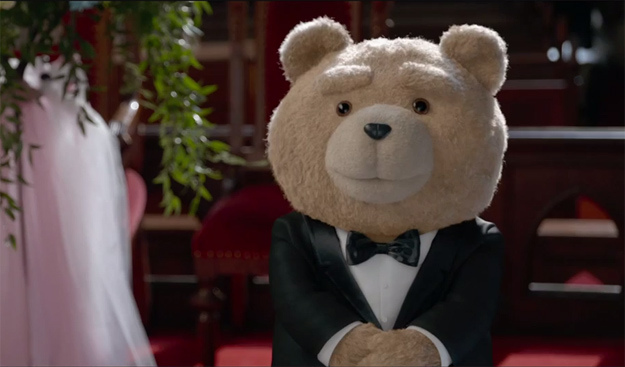 The stature of the people who agreed to be in Ted 2 is remarkable. We have Jay Leno, Liam Neeson, Morgan Freeman, and protagonists Amanda Seyfried and Mark Wahlberg (who seems to be treating his career as a bit of a comedy in itself–at one point in Ted 2 he’s drenched in semen, or, as the film would have it, “rejected black guy jizz”, which leads into a gag about the Kardashians). Evidently Seth McFarlane has a pretty deep phonebook. You get the sense, however, that he doesn’t have anybody giving him good advice. Ted 2 is a film by a man with a good sense of humour who has totally forgotten why he became successful in the first place.

Ted 2 takes place soon after the first film. Mark Wahlberg has divorced Mila Kunis; Ted, the anthropomorphic teddy bear brought to life by Wahlberg’s childhood dreams, is marrying his uncouth fiancee. There’s a funny cut from the wedding to a scene of domestic squalor in the newlyweds’ apartment. Things get worse: the government decrees that Ted is not, in fact, a human being, so he can’t get married, or hold down a job, or object when Hasbro tries to steal him and cut him open to find out what makes him so lifelike. 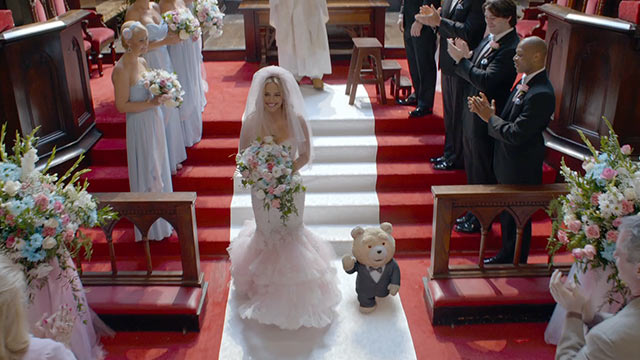 When McFarlane forgets about his plot and tries to be funny, he’s not too bad. Depending on your tastes, there are some pretty humorous scenes. But this doesn’t seem to be enough for McFarlane anymore. He wants to tell a story, so the film degenerates into a weird road movie, as Amanda Seyfried (a bong-ripping attorney), Wahlberg and Ted travel to New York to seek the assistance of a civil rights lawyer played by Morgan Freeman. So there are long stretches of the film where McFarlane takes his hand off the comedy rudder altogether and lets himself meander into swampy romance. Watching Wahlberg and Seyfried make eyes at each other whilst a CGI toy clowns in the background is exactly as exhausting as it sounds. The problem is, both actors are pretty good–they know how to laugh at themselves. But McFarlane gives them nothing to work with beyond their paper-thin courtship.

McFarlane also tries to use Ted’s quest for personhood as a metaphor for the civil rights movement–there are references to the Emancipation Proclamation, Ferguson, etc. (alongside a running joke about “black cocks” coming up no matter what you search for on Google, which doesn’t actually happen, so it’s not very funny). But the film is so drenched in sentimentality that you ultimately feel a bit sorry for this poor director reaching for a subject matter totally beyond his meagre grasp. McFarlane has positioned himself as an expert at making comedy which seems controversial but isn’t in the least.

If you like this kind of comedy, you’ll probably enjoy parts of Ted 2. But beware: the film runs for nearly two hours. Considering McFarlane’s work is generally best consumed in thirty-second snippets, take that as a very, very bad sign.