The Bling Ring is not an entertaining film, despite what the slick trailers would have you believe. It’s also not a bad film. On the surface it shares much of the fascination with youth and celebrity with Sophia Coppola’s earlier films. But none of the excited perception that made films like The Virgins Suicides or Lost In Translation so watchable is apparent here. The Bling Ring is the most damning of Coppola’s interests to date.

The real problem is the plot, based on the true story of a group of adolescents who went on a burglary spree in the homes of celebrities between October 2008 through August 2009. There’s no way around the plot, fundamentally it’s exactly what happened. Your enjoyment of this film may depend on your appreciation of fashion and celebrity culture, although as someone who’s interested in neither I may be wrong on that. To me, watching people behave abhorrently for two hours is just a draining experience.

Why would I care about any of these kids? The film never gives us a reason. I’m inclined to think Sophia Coppola’s neutral observation is wise, although it means the film is harder to digest than it may have been were we offered somebody to root for. Everybody is to blame, however motivations are evident. The characters are subtly diverse enough to understand who they are, and why they did what they did, even if their disposition and actions lack integrity to an awful degree. 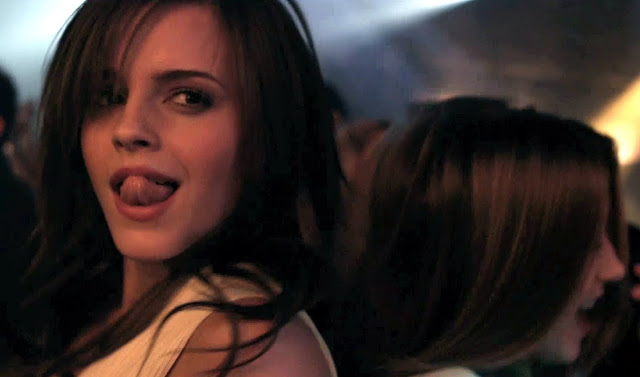 I’m inclined to believe that the fault may lie with the celebrities who were robbed. Surely they are the ones promoting such intense materialism? The scenes inside Paris Hilton’s house (her real house, Coppola obtained permission from Hilton herself to film there) are almost nausea inducing, such is the unabashed greed and narcissism on display. It’s a shame that so many high-profile people feel the need to surround themselves with meaningless possessions. Why on earth would Orlando Bloom need a case full of Rolex watches?

One of the best scenes in the film involves a couple of the kids selling those watches to a much older nightclub manager. He’s quite aware they didn’t ‘find’ them and clearly disapproves, but buys them anyway. With adults like that around you, it’s not a total surprise these kids don’t have the most concrete grasp on morality.

There are some fantastic moments, such as when former loner Marc dances in front of his webcam in his new stolen clothes. The clothes make him feel like he’s part of that culture he’s robbing, but it’s more reminiscent of the many lonely people we see on YouTube than anything glamorous. These moments are difficult to watch, but not in the same sense that films such as Hostel or Irreversible are difficult to watch. Coppola holds up an uncomfortable mirror to our own society that most of us have at some point, to varying degrees engaged with. The awareness of youth Coppola has adeptly employed in the past is just as acute in The Bling Ring, but she doesn’t look on with the same fondness.

The dialogue is the weakest aspect of the film, although it’s debatable whether better dialogue would have made the film more watchable. The young actors understandably seem awkward with the clunky dialogue. There’s nothing natural about the way they interact, which in retrospect may indeed be the whole idea.

Cinematographer Harris Savides (who died during production – Christopher Blauvelt was brought on to complete the film) brings a nice muted tone to the visuals. This sort of digital cinematography has often suited the city of Los Angeles, and was particularly memorable in Michael Mann’s Collatoral (2004).

At one point one burglars reflects ‘I think I just wanted to be part of the lifestyle. The lifestyle that everybody kinda wants.’ Coppola’s film slams the lifestyle. The shiny veneer of the clothes these kids wear and the clubs they attend is translucent.Beneath the surface nothing feels attractive. The Bling Ring is not a badly made film, it’s just about a part of our culture that is inherently unpleasant and difficult to absorb. I’ve heard complaints of the film that it fails to delve beneath the surface of these crimes. I’m not sure there’s anything to delve into.