"The French Dispatch is a dense thicket of Anderson’s most unchecked self-indulgences, a collection of tics and narrative flourishes that are impossibly baroque even by his own standards."

"Few directors devote as much time and effort to set design, to camera placement, and to a hundred other cinematic elements that make his movies a feast for the eyes."

Logically, Wes Anderson should have crossed over into self-parody long before now. The man himself has never done anything to discourage this perspective on his work, forever frustrating anyone who has patiently waited for an adjustment to his aesthetic approach. Forestalling this inevitability has been the fact that his last two films, The Grand Budapest Hotel and Isle of Dogs, were among his best, the latter even slightly deviating from his usual mode by being stop-motion animation – though it’s not the first time he’s done that, either. Those movies left us primed to expect something not, well, different, but possibly teeming with the sort of artistic life that might stave off our inclination to write him off as a one-trick pony. 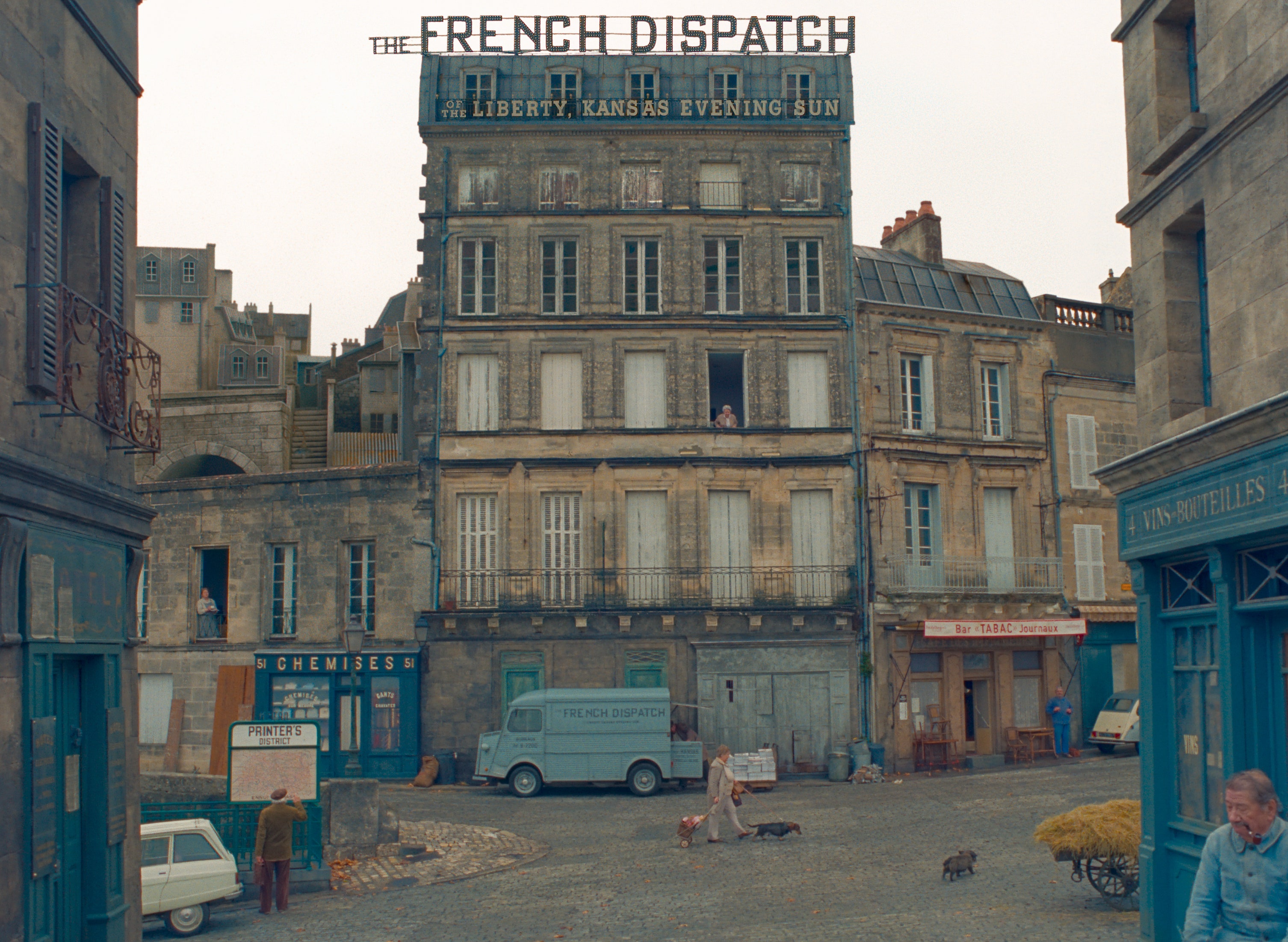 Well, ladies and gentlemen, that moment has finally, indubitably, irretrievably arrived. The French Dispatch is a dense thicket of Anderson’s most unchecked self-indulgences, a collection of tics and narrative flourishes that are impossibly baroque even by his own standards. It’s a runaway freight train of fetishised objects, ornate typefaces, homages to foreign cultures, intricate back stories of characters we’ll never hear from five minutes later, fussed over food dishes, sets cut open on the side to reveal their inner workings, swish pans to ironies embedded within the set design, changes of film stock, random inserts of animation, Tilda Swinton doing Tilda Swinton things, cobblestone streets, French prostitutes, eccentric police officers, strangled voiceover, and a cast of at least 73 recognisable faces, 67 of whom have already appeared in at least one Anderson film, usually more like five. If you thought that sentence was difficult to read, try watching this movie.

Making matters worse, it’s a narrative cut into three stories, meaning that after we’ve already devoted significant mental energy to wrangling all this wanky bullshit into some meaningful framework, we have to reset and start all over again.

The organising principle behind The French Dispatch is an unlikely insert in the Sunday newspaper from the little town of Liberty, Kansas. In 1925, an oddball newspaperman named Arthur Howitzer Jr. (Bill Murray) relocated to France and began sending back stories from the town of Ennui-sur-Blasé – get it, ha ha – to his readers in Kansas, who in no incarnation of reality would read such missives as they eked out an existence on their depression-era farms. The film begins with his death in 1975, which, according to his will, also will entail the permanent end to this misbegotten journalistic endeavour.

We are treated, if that’s the right word, to the three mammoth stories written for this final edition of the titular periodical by its stable of expatriate reporters. The first is about an imprisoned murderer (Benicio del Toro) and the abstract modern art he creates, which takes the art world by storm. The second involves a group of student protesters led by a man named Zeffirelli (Timothee Chalamet). There’s a third featuring the French Dispatch reporter played by Jeffrey Wright, but I’ll be damned if I could describe or even really remember what it’s about. 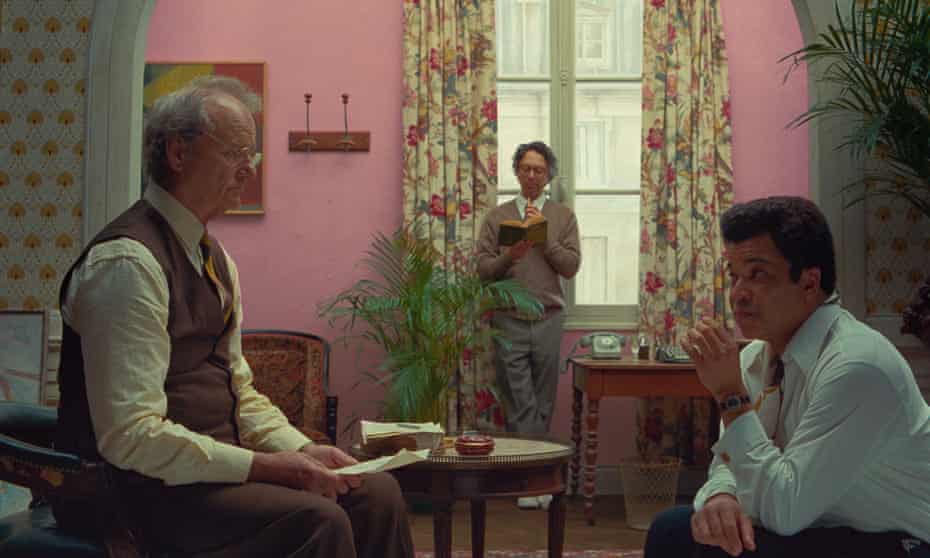 The experience of watching The French Dispatch is like being hit by a tsunami of exposition and fastidious quirks. Someone is always frantically narrating this material – sometimes an unseen Anjelica Huston, sometimes the writers who have written the pieces, who include Frances McDormand – but Anderson never considered whether his viewers could assimilate this avalanche of information long enough to become invested in it. When this is the mode for one of Anderson’s other films, at least we have the chance to adapt over the course of two hours. It all relates to characters we follow throughout and steadily loan our sympathies. When it’s in shorter form – though nothing about this movie feels short – it leaves us drowning under the volume of that tsunami.

The counterbalancing merit to Anderson’s work has always been its showcasing of a true brand of cinematic genius, an absolute mastery of the language of cinema. Few directors devote as much time and effort to set design, to camera placement, and to a hundred other cinematic elements that make his movies a feast for the eyes. The props and backdrops he assembles, for visual payoffs that last no more than five seconds of screen time, are jaw-dropping in their fundamental generosity. 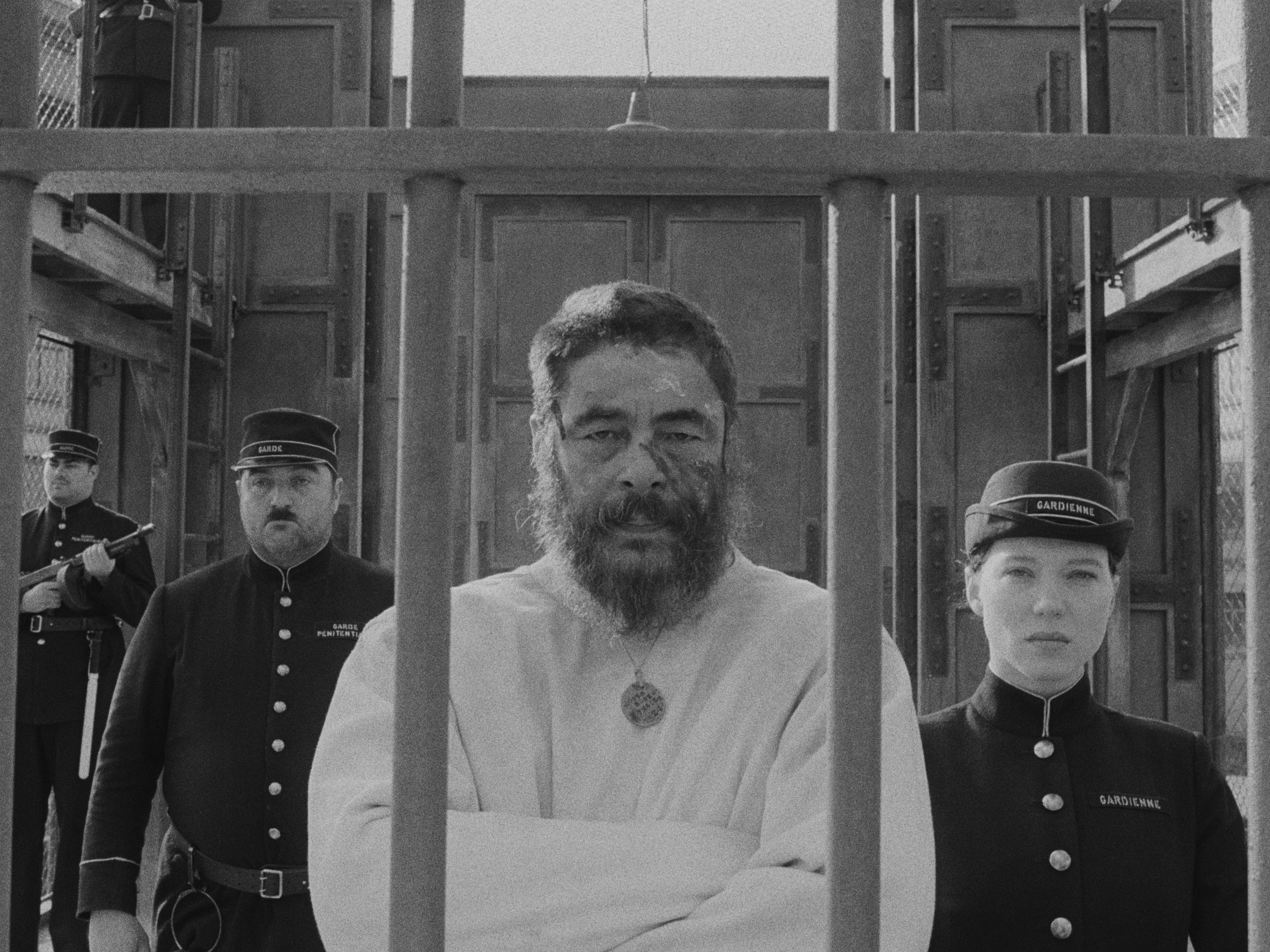 Over time, though, we get inscrutable results from this navel-gazing mania of visual information. There’s a scene in the movie’s second section that illustrates how far Anderson has gone down his own rabbit hole. Scarcely two minutes after we’ve been introduced to a whole host of new characters, one of their back stories is reproduced in a stage play about that character’s life that goes on for five minutes. He’s created a typically Andersonian set for this play and cast actors to assume roles. As you’re watching and being impressed on a basic technical level, all you can really think is “Wait, who are these people again? And why am I watching them?”

Who indeed. Why indeed. And yet we’re on board at the start. As we see a café waiter assembling an order of disparate drinks on a rotating tray, then carrying them up a series of serpentine staircases to the French Dispatch offices, you’re in that familiar world of Anderson’s mind. His setup of Ennui-sur-Blasé – get it, ha ha – is pretty delightful stuff, and this carries over into the first story about the murderer turned artist, easily the strongest of the three. 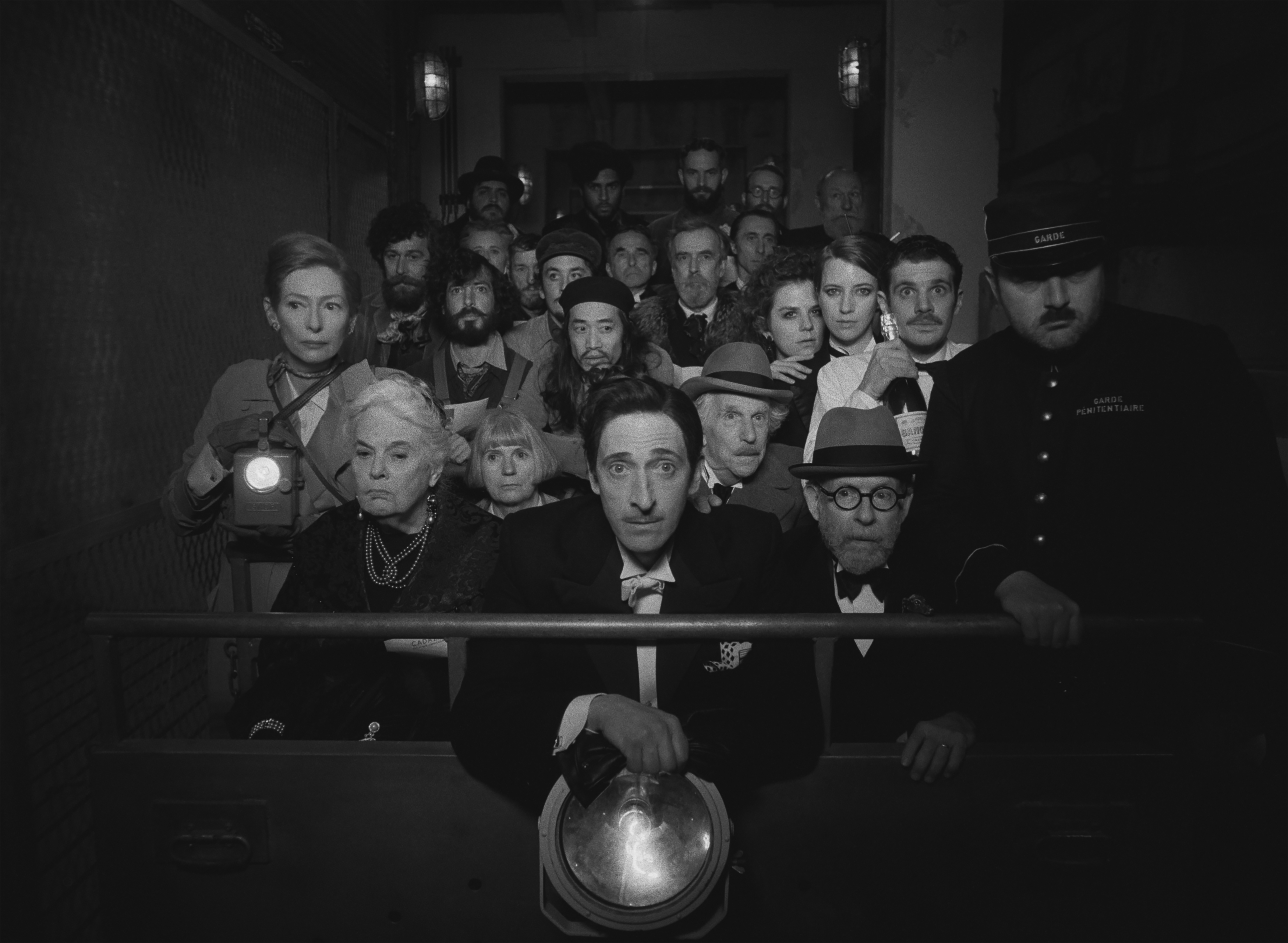 It doesn’t last. If a Wes Anderson film is a Rube Goldberg contraption of deliberate artificiality fuelled by charming whimsy, the gears of that contraption become mangled beyond recognition as the film churns toward its conclusion. I’d like to believe in a world where a newspaperman with chutzpah would report on the happenings of a small French town to readers in Kansas over the course of half a century, but Anderson grinds that suspension of disbelief down to dust. Even his most ardent acolytes must hold him accountable for the diminishing returns on his prodigious talent.

The French Dispatch is currently playing in cinemas.