I like Baz Luhrmann. Rather, I like a very specific version of Baz Luhrmann. I like the pants-on-head, Romeo + Juliet gunfight, El Tango De Roxanne, fuck-you-I’ll-put-Smells-Like-Teen-Spirit-in-my-1900s-era-French-movie Baz Luhrmann (hereby referred to as Crazy Luhrmann). That guy’s great. I’m not really a fan of the Luhrmann who handles all of his dramatic human interactions as if they’re an opera, who strips out subtlety for raw screaming emotion in its place, unless he handles it well. He rarely does.

Thus, The Great Gatsby is a very difficult film for me to discuss, because both Luhrmanns are at work at once. There are a few moments where the film buries the needle on either side of the Luhrmann spectrum: Crazy Luhrmann runs out in front of you and screams the lyrics to a Jack White cover of a U2 song while Leo drives his fancy yellow car. The other Luhrmann pushing some relatively reserved characters to their limits and causing some honest-to-God real drama in the process. For the majority of The Great Gatsby’s length, however, the film hovers between two Luhrmanns without committing fully to either. Moulin Rouge routinely makes me laugh with delight, give a triumphant “YEAH” at the spectacle and insanity of it all, and Romeo + Juliet (hell, even some parts of Australia) draw out an “Aww…” when Luhrmann hews to the bone and lets the actors be so open and emotionally honest with each other. The reaction I had from The Great Gatsby was very much a “Hmmmmmm.” 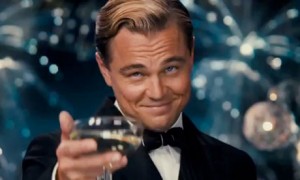 Let’s try and be positive first. I can’t mince words here, the movie is fucking gorgeous. A riot of costumes and production design vomited right into your eyes, with every setting on the computer labelled ‘Saturation’ pushed to the limit. A good friend of mine has often referred to Luhrmann (derisively) as ‘Michael Bay for theatre kids’, and that aspect of his style is at full force in The Great Gatsby. If you go to your movies for spectacle, then the parties in the film will give you, for my money, more thrill and eye-candy than an entire summer of blockbusters. I even dug how Luhrmann handled the 3D, a real rarity for me. The only thing that bothered me about the look of the floor was Luhrmann’s use of CGI. It’s brilliantly done and allows for some shots that would be almost impossible using practical work, but the work Luhrmann has done in the past kind of makes me want him to never use a computer again.

Several of the performances in The Great Gatsby are career highs. Leo, as always, is fantastic, and brings a variety and subtlety that is a little lacking in some of the other performances. Gatsby is one of the most well-rounded and complex characters in literature, a walking metaphor for an entire ideal, and Di Caprio manages to touch on so many aspects of him at once. It’s honestly a shame the film isn’t better for his sake, it could very well have been his Oscar winner. Carey Mulligan plays Daisy with a distance and aloofness that falls away at all the right moments. Joel Edgerton’s Tom has a bit too much of a mustache-twirling villain quality to him, but that’s fairly reflective of the novel and I can’t fault him for it, although it would have been an interesting twist if Luhrmann had found another angle for the character. Newcomer and Melbourne-native Elizabeth Debecki seems like she’s stepped right out of a 1920s social event, and has cemented a future for herself with her powerhouse performance as Jordan, despite her character suffering the most in the adaptation. Tobey Maguire is…mediocre and kinda boring, but that’s not really a bad fit for Nick. I can say that the majority of the cast stepped up admirably, although I have to wonder how much of that had to do with Luhrmann’s direction and how much was the effect of getting a roomful of world-class talent (and Tobey Maguire) and turning on a camera. 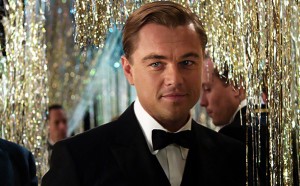 Now for the tricky parts. F. Scott Fitzgerald’s novel The Great Gatsby is often praised for its subtlety, for allowing ambiguity in both its characters and symbols. Combining this sort of source material with Luhrmann’s tendency towards the melodramatic and operatic is…volatile. There are a few moments where Luhrmann turns down the volume and lets the text and the image speak for itself, but the majority of the film is narrated by Maguire with prose directly from the novel, and in case we’re missing it the occasional bit of on-screen text hammers home a few points. The film seems to want to portray Gatsby and Daisy’s romance as some sort of epic tale, full of love and loss and redemption and betrayal and Shakespearean tragic irony. It works on the film’s terms, and the moments where the drama reaches its fever pitch are among the film’s best. However it also tramples elements of the novel that could have been shown with just a few glances, with a perfect quiet close-up. It isn’t necessarily a detriment to the film, but it is a shame.

The music of the film has been a heavily promoted talking point.

“Look! No Church In The Wild’s in the trailer!”

“Jay-Z is doing the score!”

“Fergie and Will.I.Am are doing songs exclusively for the film!”

I was so excited at the time. ‘It’s the anachronistic Crazy Luhrmann that I love so much, and he’s actually picking a thematically-relevant technique!’ I thought. I heard promises of a party set to Party Rock Anthem and girded myself. And for some brief shining moments, it works in the film. Lana Del Rey, god bless her, donated one hell of a dramatic anthem in “Young and Beautiful”. The party soundtracks absolutely thrum and I frankly preferred the dance-hall bangers to any period jazz they could have trotted out. But Luhrmann just doesn’t commit enough to the conceit for it to really impact. The anachronistic soundtrack is there, but it falls off around the second half of the film. It feels like a gimmick that he threw out, a sprinkle of Crazy Luhrmann instead of an entire course of insanity. 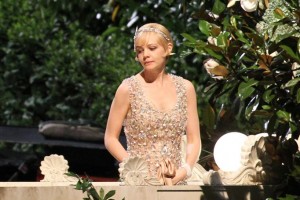 I can’t quite tell you if the film works. In some places it does, those moments where the drama works or the spectacle swells. But in the end, it’s not subtle enough to be an admirable adaptation and not spectacular enough to recommend it as a visceral feast in the same way one would enjoy a Moulin Rouge. It’s a timeless story with some of the trickier parts replaced with quirks, shot beautifully but with a heart that’s thinner than it could have been. But maybe we’ll get the real Crazy Luhrmann next time. Maybe he’ll finally find some subtlety to his drama.

I believe in the Great Luhrmann movie, the orgastic future film that year by year recedes before us. It eluded me then, but that’s no matter—tomorrow he will shoot better drama, stretch out his crazy farther. . . . And then one fine premiere—
So Baz beats on, boat against the current, borne ceaselessly into the middle of the road.